In December after a vote by 128 UN member nations condemning the United States’ sovereign decision to move our Israeli embassy, U.S. Ambassador Nikki Haley found herself at the center a war of words. “The United States will remember this day in which it was singled out in this assembly for the very act of exercising our right as a sovereign nation,” she said. 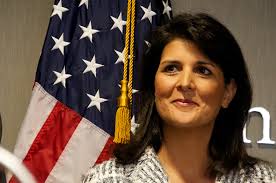 Ambassador Haley acted promptly to deliver on her promise of consequences. The U.S. Mission to the United Nations announced that next year’s UN budget would be slashed by over $285 million and warned that further reductions would also be made to the UN’s management and support functions.

“We will no longer let the generosity of the American people be taken advantage of,” Haley said in a statement, adding that the “inefficiency and overspending” of the organization is well-known. The timing of her statement sends a clear message.

After the vote, Haley reminded the assembly that the U.S. was “by far the single largest contributor to the UN” and would remember the vote “when we are called upon to once again make the world’s largest contribution to the United Nations, and we will remember it when so many countries come calling on us, as they so often do, to pay even more and to use our influence for their benefit.”

“I must also say today: when we make generous contributions to the UN, we also have expectation that we will be respected,” she said. “What’s more, we are being asked to pay for the dubious privileges of being disrespected.”

“No country has done more than the United States, and our generosity will continue,” Haley said in a statement. “But our decisions… must always be made by Americans and Americans alone.”

Biden’s Plan to Buy Votes  As the midterm elections fast approach, Democrats have lost a key demographic that they relied on in 2020: … END_OF_DOCUMENT_TOKEN_TO_BE_REPLACED

Phyllis Schlafly Eagles · May 16 | The Trickle-Down Effect of Bad Policies Good news arrived in the district court of the District of Columbia, … END_OF_DOCUMENT_TOKEN_TO_BE_REPLACED

Phyllis Schlafly Eagles · May 19 | Boys and Girls and Grades? ** Previously recorded by Phyllis Schlafly // May 2015 ** Colleges claim they … END_OF_DOCUMENT_TOKEN_TO_BE_REPLACED