No one would dispute the fact that Phyllis Schlafly did not fit into the mold of Washington politicians. She knew that the issues facing Americans were not fuel for empty campaign promises. To Phyllis, they were real problems that she had to face like everyone else. When she wrote the May 1968 issue of the Phyllis Schlafly Report, the passion of personal experience can be clearly seen in the headlining article entitled “CRISIS IN LAW AND ORDER.” Without a doubt, her prophetic writings on the riots of 1968 very clearly apply to the protests that have swept the nation in recent years.

The years of the Johnson administration from 1963 to 1969 were fraught with violent turmoil in the streets of America’s major cities. In 1967, Phyllis released a book entitled Safe – Not Sorry, which exposed the corruption of poverty office workers under the Great Society program. She connected the dots to show how these government employees, including known Communists, were actively aiding and participating in violent riots across America. Just as her book predicted, the riots got even worse in 1968. In that year, destructive and violent demonstrations led to untold millions of dollars in property damage and millions more in lost revenue for businesses because legitimate customers were too frightened to leave their homes to go shopping.

In the May 1968 PS Report, Phyllis reported the shocking numbers justifying people’s fears. From 1965 to 1968, the number of riots exponentially increased from 5 in 1965 to 125 in just the first 4 months of 1968. More than 3,500 people were injured and 130 were killed in riots from 1965 to 1967. Many of those people were law enforcement officers who were operating on behalf of law and order. As Phyllis put it: “Our nation’s capital – once the showplace of the world – is now more dangerous than the Vietnam jungle.” Everyone wanted to know what was happening, and Phyllis Schlafly was determined to get to the bottom of it.

After hard work and investigation, she determined the root of the civil unrest problem. Politicians simply weren’t doing their jobs. As Phyllis put it: “Instead of enforcing the law, the Justice Department is spending its time asking judges to release rioters scot-free.” No matter how valiant police were in putting their lives on the line for law and order, an overwhelming tide of releases undid any progress that was made. From 1965 through 1967, riots lead to 28,932 arrests, but only 5,434 convictions. “In other words, a rioter has less than one chance out of five of being convicted. With odds so favorable to criminals, the temptation to loot whiskey, gun, clothing, and television stores is irresistible.” Phyllis knew that the first step to solving a problem was to get to its root.

However, she did so much more than just point out the problems. Her two-fold solution to the riots of the Sixties is the same solution that we need today. First, we must get the right people into office. Second, we need to stay vigilant and hold them accountable to the promises that they made on the campaign trail. Phyllis’s May 1968 PS Report proved that violent protests don’t just happen; soft elected officials allow them to happen. That’s why Donald Trump’s promise to be a law and order president was so important in last year’s election. We need a president who will enforce the laws and give no quarter to those who would resort to violence and destruction to get their message across. With a network of supporters to hold him accountable, Donald Trump can be that President. Phyllis Schlafly saw that before nearly anyone else, and we would do well to follow her lead.

To view the August 1967 Phyllis Schlafly Report in its entirety, please click on the image below. 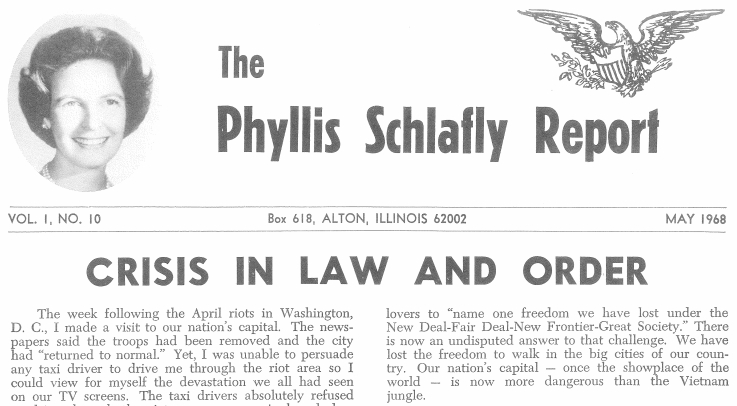 What You Need to Know is the media is finally reporting on the Southern Border! Governor Ron DeSantis and Governor Greg Abbott are forcing the media … END_OF_DOCUMENT_TOKEN_TO_BE_REPLACED

Phyllis Schlafly Eagles · #WYNK: Ray Epps Was In On It! | September 27, 2022 #ProAmericaReport The following is a transcript from the Pro America … END_OF_DOCUMENT_TOKEN_TO_BE_REPLACED

For Immediate Release: September 14, 2022Contact: Ryan Hite, Communications Director Washington, D.C.: "Not to be outdone by the Soros-backed … END_OF_DOCUMENT_TOKEN_TO_BE_REPLACED

Phyllis Schlafly Eagles · #WYNK: Who Is Congressman Troy Nehls? | September 28, 2022 #ProAmericaReport The following is a transcript from the Pro … END_OF_DOCUMENT_TOKEN_TO_BE_REPLACED

What You Need to Know is The Narrative Machine is Obsessed with Trump! First, it used to be called the Trump Exhaustion Syndrome now the left is … END_OF_DOCUMENT_TOKEN_TO_BE_REPLACED