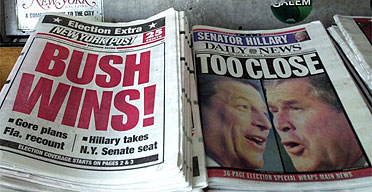 Are big media trying to steal the presidency and put Al Gore in the White House? The 2000 election confirms the widespread public perception that the media are advocates, not reporters.

Major media spent the weekend telephoning Republican electors all over the country and asking them two questions: Since Al Gore got the popular vote, would you consider changing your vote from Bush to Gore? and, Do you know you are not legally bound to vote for Bush?

Will the names of the Republican electors who sound uncertain in their replies be leaked to a Democratic political goon squad to work them over to get the handful of electoral votes Gore needs? Or to make promises that can compensate for a guilty conscience and the disdain of their Republican constituents who elected them to vote for Bush?

The most consequential election fraud on November 7 was committed by the television networks in falsely announcing, while the polls were still open in Florida’s Panhandle (which operates on central time), that Gore had won Florida. Many people standing in long lines, or still on their way to vote, then went home thinking their vote didn’t matter.

This could have amounted to thousands of people, a decisive margin in Florida. The Panhandle has ten counties with a population of 739,523, was experiencing a heavy turnout, and is pro-Bush in some parts by up to four-to-one.

Did the networks run this false information in a deliberate attempt to discourage Bush voters? Many people think so. The apologies/explanations/excuses given the next day on CBS-TV and by the New York Times were completely unpersuasive.

The networks’ announcements later in the evening, retracting the false story, then calling Florida for Bush, and then retracting that call, were all after the Florida polls had closed. Maybe those were just sloppy attempts to confuse the public about the import of the original announcement that was so damaging to Bush.

So why are they doing a third count without evidence of vote fraud? Is it because, as Gore’s campaign manager Bill Daley said, they have to find more votes?

Gore has real chutzpa in selecting Bill Daley to monitor the Florida recounts. Daley’s father, Chicago’s Mayor Richard J. Daley, was boss of the famous political machine whose most notable victory was stuffing enough votes in Chicago’s ballot boxes to carry Illinois by about 8,000 votes in 1960 and thereby elect John F. Kennedy over Richard Nixon.

Daley-Gore demanded a manual recount of the ballots in several heavily Democratic counties because the machine ballots, which still have chad attached firmly or hanging loosely, can be counted only by subjective determinations of the voter’s intent. This opens up endless partisan wrangling plus the likelihood of manual or stylus fraud.

It’s about time that the American people and the media focus on the inefficient and antiquated voting systems used in most of the country that allow so much dishonesty and corruption. It is intolerable that an error rate of five percent is considered normal, and it’s scandalous that it’s so easy to cheat.

Rep. Bob Dornan of California lost his seat in 1996 by 979 votes, largely because of the votes of illegal aliens. Al Gore rushed through the naturalization of at least 75,000 aliens with arrest records in time to get them registered to vote Clinton-Gore in November 1996.

Woody Jenkins lost his bid for a Senate seat from Louisiana in 1996 because of frauds financed by the gambling industry. Illegalities included recording more votes on machines than there were eligible voters, using city employees to campaign, hauling people to different polls for multiple voting, and transfers of gambling money to get-out- the-vote groups.

The 1993 Motor Voter Act allows people to register to vote by mail for federal elections on forms that can be picked up at any government office. In their book “Dirty Little Secrets,” University of Virginia Professor Larry Sabato and Wall Street Journal reporter Glenn R. Simpson asserted that 2 million to 3.4 million “phony registrations” were on the voting rolls in California.

The New York Times reported in 1998 that the percentage of registered voters who are ineligible because they have died, moved or registered at multiple addresses is 16.8 percent. This allows plenty of opportunity to vote the graveyards, the nursing homes, the absent students, and the homeless who can be enticed with beer or cigarettes.

In order to vote, every citizen should be required to present a picture ID and to sign the register with a signature that matches the one given at the time of registration, which should be at least 30 days before the election.

The whole process of self government is at stake if we can’t rely on the integrity of the ballot box. What can “one man one vote” possibly mean if our votes aren’t honestly counted?

What You Need to Know is how the left controls the Narrative Machine. Check out these two headlines — Senate bid to save Roe v. Wade falls to GOP-led … END_OF_DOCUMENT_TOKEN_TO_BE_REPLACED

Phyllis Schlafly Eagles · May 16 | The Trickle-Down Effect of Bad Policies Good news arrived in the district court of the District of Columbia, … END_OF_DOCUMENT_TOKEN_TO_BE_REPLACED

Mike Davis is the former Chief Counsel for Nominations to the Senate Judiciary Committee under Sen. Chuck Grassley. In his current role as founder and … END_OF_DOCUMENT_TOKEN_TO_BE_REPLACED