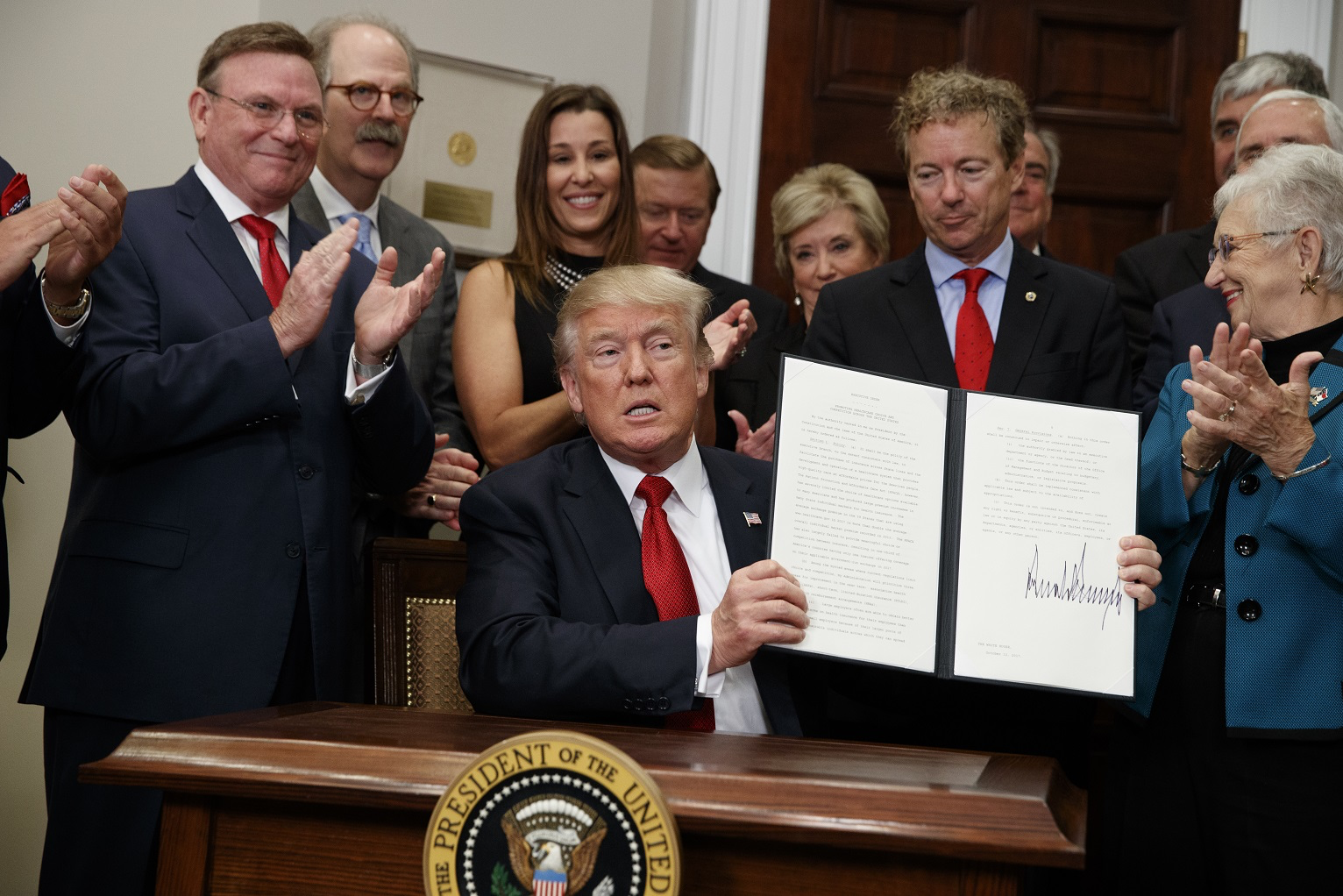 “Since Congress can’t get its act together on Health Care,” Donald Trump tweeted last week from his personal Twitter account, “I will be using the power of the pen to give great Health Care to many people.” Trump’s tweet was followed by a series of presidential actions that offer substantial relief for middle-class Americans hurt by Obamacare.

Unlike Barack Obama’s executive actions that were justifiably criticized by conservatives, President Trump’s use of the presidential “pen” was entirely within his lawful powers under the Constitution. Trump’s new actions on health care were authorized by laws that were previously passed by Congress, including Obamacare itself.

Trump’s first action was to restore the freedom to buy short-term policies as a viable alternative to high-priced Obamacare policies. These policies were increasingly popular until Obama imposed a nationwide 90-day limit on such policies, which severely limited their usefulness.

Short-term policies lack some of the costly coverages that many Americans do not want or need, such as maternity care and drug rehab, but they are much more affordable. Typically costing less than half of what Obamacare-compliant policies cost, they could be just what the doctor ordered for millions of middle-class Americans who have been priced out of the individual market for health insurance.

Only about 20 million Americans rely on the individual and small-group market for health insurance, but that small fraction of our nation has been forced to bear the burden of caring for people with costly pre-existing conditions. That unfair burden of cost-shifting is the main reason premiums and deductibles have been rising so rapidly.

Although some low-income people have received credits to help pay those rising premiums, millions of self-employed and other middle-class people are not eligible for any subsidy. About 8 million Americans have been hit with Obamacare penalties despite the lack of affordable insurance.

The unaffordability of Obamacare has not affected the 155 million Americans with employer-based health insurance, which continues to benefit from a loophole dating back to World War II. Not only do employer plans receive a $260 billion-a-year tax break, which is by far the largest so-called “tax expenditure,” but large and medium-sized employers can also opt out from many of the regulations that increase the cost of individual policies.

The employer-based tax break can be changed only by Congress, but President Trump is doing what he can to alleviate the unfair discrimination against individual and small group insurance. In the second part of his health care order, Trump ordered the U.S. Department of Labor to consider how associations of small employers (including self-employed individuals) can qualify for the same privileges as large employers.

The Labor Department is already authorized by Congress to enforce a 1974 federal law called ERISA, which regulates employer health plans. For decades, large employers have exploited ERISA to exempt themselves from some of the regulations that drive up the cost of individual and small group health insurance.

Association health plans have long been promoted by Senator Rand Paul, a medical doctor who specialized in eye surgery before being elected to the Senate in 2010. Despite voting against the unwieldy repeal-and-replace bill that failed in Congress last summer, Senator Paul recently enjoyed a round of golf with the President at the Trump National Golf Club in Sterling, Virginia.

The goal of association health plans is to create a level playing field so that small employer groups and self-employed individuals can obtain the same type of health insurance as large employers who currently enjoy an unfair advantage.

While the Labor Department goes through the process of changing its regulations under Trump’s direction, Congress should pick up on this idea and extend to individuals, whether employed or not, the right to buy health insurance across state lines.

Trump took another welcome action last week, by cutting off “cost sharing reduction” (CSR) payments to insurance companies. “That money is a subsidy for insurance companies,” Mr. Trump said as he announced his long-awaited decision. “Take a look at their stocks. Look where they are. They’re going through the roof.”

A federal judge in Washington, D.C. ruled last year that the CSR payments by Obama were illegal, because Congress never appropriated the money to fund them, but the liberal litigation factory is gearing up to block Trump’s decision to discontinue them. Democratic attorneys general announced plans to file a new lawsuit in California, where they are more likely to find a judge willing to issue an injunction against Trump.

With Senate Majority Leader Mitch McConnell backing failed candidates as he did in the recent Alabama primary, and criticizing the America-first populism of Steve Bannon, it is unlikely the Senate will accomplish anything soon. Fortunately, President Trump is taking the initiative to lead Americans out of Obamacare and other failed programs of the prior administration.

Phyllis Schlafly Eagles · #WYNK: Who's Against Trump | June 13, 2022 #ProAmericaReport The following is a transcript from the Pro America … END_OF_DOCUMENT_TOKEN_TO_BE_REPLACED

Phyllis Schlafly Eagles · June 29 | Pro-Life Without Exceptions: Health of the Mother Empty emotional appeals are the only way for pro-choicers to … END_OF_DOCUMENT_TOKEN_TO_BE_REPLACED

What You Need to Know is Republicans cave on gun rights. Senate Republicans have put on full display the ruling class uniparty by compromising with … END_OF_DOCUMENT_TOKEN_TO_BE_REPLACED

Last Friday was the busiest travel day of the year so far, but hundreds of thousands of airline passengers were stranded by flight cancellations. … END_OF_DOCUMENT_TOKEN_TO_BE_REPLACED

“I never like to take credit for anything,” Donald Trump told a hostile reporter last month. “God made the decision,” he added recently about the … END_OF_DOCUMENT_TOKEN_TO_BE_REPLACED

What You Need to Know is Biden is marching toward America Last. Even as our continue to get entangled in NATO and their picking a fight with Putin. … END_OF_DOCUMENT_TOKEN_TO_BE_REPLACED