As the Reagan years came to a close with the election of 1988, Phyllis Schlafly took the time to look backwards at where the conservative movement had come from, and to look forward at where the conservative movement was going. At this decisive moment in history, Americans wanted to know if conservatism was a fad, if it would flounder when President Reagan’s term expired, or if its brightest days were still ahead. The electoral choice could not have looked clearer. On one side stood George H.W. Bush, avowed conservative successor to Ronald Reagan. On the other side stood Governor Michael Dukakis of Massachusetts, self-identified “liberal” and “card-carrying member” of the ACLU. Phyllis’s insight in her July 1988 Phyllis Schlafly Report is a treatise of incalculable historical and contemporary significance. This pivotal point in the history of our movement defined the political terminology and reality that we use to this day.

The conservative movement started with Barry Goldwater in the presidential race of 1964. Bold men and women like Phyllis Schlafly emerged to lead a fight to make conservatism a powerful force in American politics, a concept which was completely foreign at the time. Although Goldwater prevailed over Establishment candidate Nelson Rockefeller to secure the Republican nomination, he was defeated in the general election by Lyndon B. Johnson. This defeat brought on a condition Phyllis called “Goldwater Syndrome,” which caused most conservatives to be “resigned to the conventional wisdom of the day that the American people would never elect anyone more conservative than Richard Nixon or Gerald Ford.” While conservatives won some policy battles in the 1970s, most notably Phyllis’s supreme defeat of the Equal Rights Amendment, largely this period was an incubation period for conservatism.

The conservative movement made a comeback with the advent of President Ronald Reagan. Like a phoenix rising from the ashes of the Goldwater defeat, Ronald Reagan and stalwarts like Phyllis Schlafly mobilized in greater force than ever before. Looking back on that victory, Phyllis asked “Did Ronald Reagan really turn millions of liberals into conservatives? Not likely. What he did was to articulate the many facets of conservatism and allow people who are conservative in different areas of life, and for different reasons, to say, ‘Ronald Reagan speaks for me.’” Phyllis knew that the key to conservative victory was not necessarily to win others over to our side, but to activate and mobilize the existing conservative army which is simply waiting for someone to tell them that they no longer have to be repressed by the political correctness of both party Establishments. The 1988 presidential race saw the death of “liberal” as a positive label. As Phyllis put it in the 50th Anniversary Edition of A Choice Not an Echo, “Since Dukakis, no politician wants to be called a liberal any more.” Of course, we now see liberals using the trendy term “progressive,” but the near-total abandonment of “liberal” by the Left is still a shining testament of the potency of the Reagan Revolution.

Phyllis Schlafly painted a bright future for conservatism in her prophetic July 1988 Phyllis Schlafly Report. Under the headline “America’s Future Is Conservative,” she predicted that conservatism was no fad, but a set of core principles held by many Americans who need only a strong leader to be fully unleashed. Her prediction came to fruition in 2016 with the success of the Trump campaign and his current administration. Much could be said of Phyllis Schlafly’s prophetic political intuition and optimistic yet realistic outlook on this strong conservative movement that she started in 1964. Perhaps the greatest take-away from the July 1988 Phyllis Schlafly Report is the consistency and tenacity with which Phyllis fought the good fight. Before conservatism was mainstreamed, Phyllis was writing books on Goldwater and national defense. When most of the conservative movement was suffering from “Goldwater Syndrome,” Phyllis was fighting and winning on ERA against what seemed like impossible odds. When Reagan rose to the presidency and carried out his agenda, Phyllis was fighting with him from the Main Streets of America. As we will see in the next twenty-nine years of reports, Phyllis Schlafly never stopped fighting. We would do well to follow in the footsteps of Phyllis Schlafly and fight through the best and worst of times in order to maintain the fact that history is indeed on the side of conservatives.

To view the July 1988 Phyllis Schlafly Report in its entirety, please click on the image below. 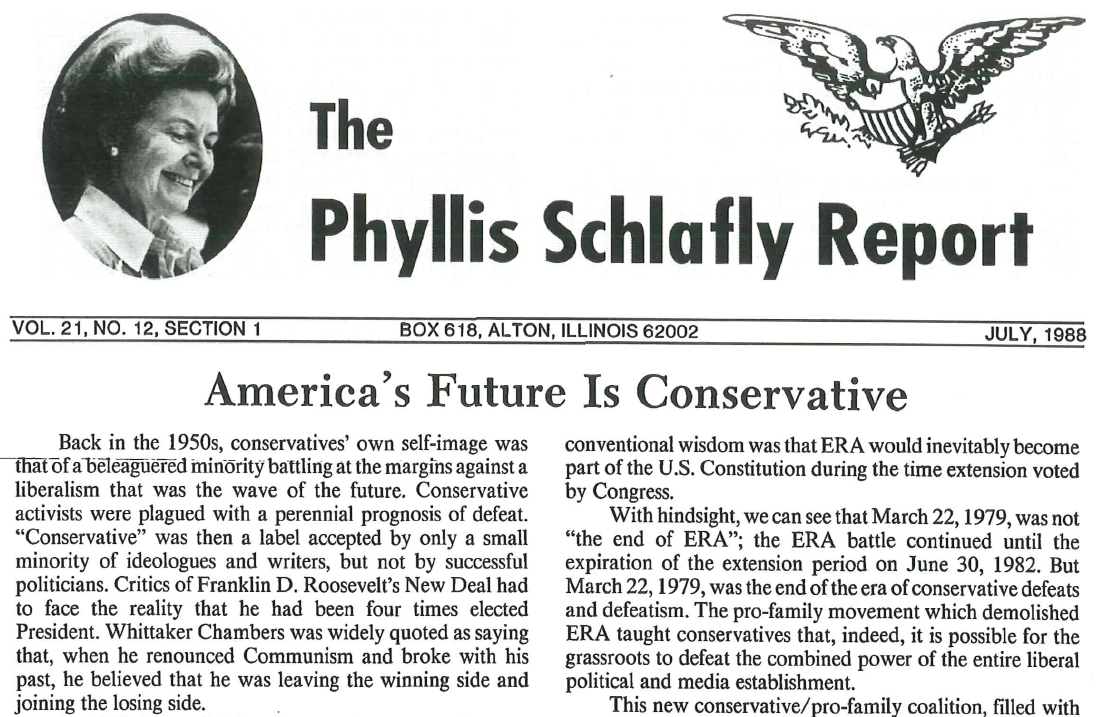 Phyllis Schlafly Eagles · #WYNK: Fake History is a Real Problem | August 31, 2022 #ProAmericaReport The following is a transcript from the Pro … END_OF_DOCUMENT_TOKEN_TO_BE_REPLACED

What You Need to Know is Democrats’ plan to slow down GOP investigations. David Brock (of Media Matters) released a memo detailing a group that will … END_OF_DOCUMENT_TOKEN_TO_BE_REPLACED

What You Need to Know is about the fast changing strategies of the left. They used to be able to run to judges and get their priorities through because they couldn’t convince the voters through the traditional system. Now, however, conservatives have transformed the judiciary but the Congress has run so far to the left […]

Phyllis Schlafly Eagles · November 8 | Can Your Vote Make A Difference? On this Election Day, it had been my intention to tell you the story of a … END_OF_DOCUMENT_TOKEN_TO_BE_REPLACED

Phyllis Schlafly Eagles · October 27 | Teddy Roosevelt: The Man in the Arena Theodore Roosevelt is known for many things. He is known for being the … END_OF_DOCUMENT_TOKEN_TO_BE_REPLACED

What You Need to Know is China is hooking the US on two drugs: fentanyl and digital fentanyl (aka TikTok). Both of these are attacks on American … END_OF_DOCUMENT_TOKEN_TO_BE_REPLACED

Phyllis Schlafly Eagles · December 9 | Are Supporters of America First Scrooges? It’s going to be a long, cold winter in the United States, but … END_OF_DOCUMENT_TOKEN_TO_BE_REPLACED

What You Need to Know is how the Narrative Machine skewed the 2020 election. From Elon’s documents dumps, we now have concrete information that the … END_OF_DOCUMENT_TOKEN_TO_BE_REPLACED

What You Need to Know is how lame the Lame Duck session is. For all of November and December, there are several dangerous public officer holders who … END_OF_DOCUMENT_TOKEN_TO_BE_REPLACED