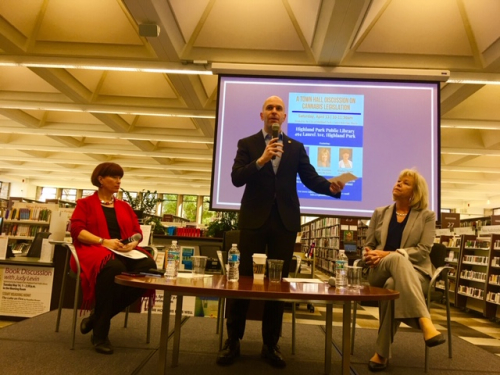 If it’s recreational, it can’t possibly destroy brain cells or be harmful in any other way to adults or teens who smoke pot, or so many politicians would have us believe here in Illinois. With Michigan leading the way as the first state in the Midwest to allow people with no medical reason to purchase and use marijuana, many Illinois legislators seem anxious to make Illinois state number 11 along with Washington, D.C.  Governor Pritzker endorses and supports legalized recreational marijuana, while Gov. Bruce Rauner opposed the move.

State Sen. Heather Steans, a Chicago Democrat and a key supporter of an initiative to legalize adult recreational marijuana in Illinois, said during a recent interview with Capitol News she hoped to file substantial adult use language “by the end of April or very early May, if not (Tuesday) April 30. … Very soon, when we are done with the two-week break here.” Steans hopes to get a bill passed before the end of the spring legislative session on May 31, 2019, for Governor Pritzker to sign.

With stocks of cannabis companies soaring and politicians promoting legalization as a low-risk way to raise tax revenue to reduce crime, what’s the truth about marijuana?  Over the last 30 years there has been much literature by psychiatrists and epidemiologists who have turned speculation about marijuana’s dangers into science; however, over the same period, a shrewd and expensive lobbying campaign has pushed public attitudes about marijuana the other way.

As to marijuana and THC, the active ingredient often prescribed for pain relief for medical use, a July 2018 study in Australia found that a large four-year study of patients with chronic pain in Australia showed cannabis use was associated with greater pain over time.

This breaking study of April 10, 2019 negates the arguments perpetuated by marijuana lobbyists that legalization can help solve the opioid epidemic.   Previous research has shown that marijuana use by those suffering with pain usually results in the necessity to prescribe more, stronger medications, because marijuana lowers pain thresholds.  This must be considered in the push to expand the use of marijuana and possibly adding fuel to the addiction fire that is already devastating our communities.

As to marijuana as a safe the effective medicine, in an article updated June 2018: The U.S. Food and Drug Administration (FDA) has approved THC-based medications, dronabinol (Marinol®) and nabilone (Cesamet®), prescribed in pill form for the treatment of nausea in patients undergoing cancer chemotherapy and to stimulate appetite in patients with wasting syndrome due to AIDS. Researchers generally consider medications like these, which use purified chemicals derived from or based on those in the marijuana plant, to be more promising therapeutically than use of the whole marijuana plant or its crude

There is also Cannabidiol (CBD), a non-psychoactive product that has a wide range of therapeutic benefits. CBD is naturally occurring in the hemp plant. It is being used to alleviate various conditions, including anxiety, stress, chronic pain, nausea, rheumatoid arthritis, psoriatic arthritis, schizophrenia, diabetes, PTSD, alcoholism, strokes and cardiovascular disease, cancer, and other ailments.

Sites that educate about marijuana

Marijuana: Addictive and harmful to the human brain of teens

Evidence shows that marijuana — which has skyrocketed in average potency over the past decades, as detected in confiscated samples — has steadily increased over the past few decades. In the early 1990s, the average THC content in confiscated marijuana samples was roughly 3.8 percent. In 2014, it was 12.2 percent. The average marijuana extract contains more than 50 percent THC, with some samples exceeding 80 percent. These trends raise concerns that the consequences of marijuana use could be worse than in the past, particularly among those who are new to marijuana use or in young people, whose brains are still developing (see “What are marijuana’s long-term effects on the brain?“).

Considerable evidence suggests that students who smoke marijuana have poorer educational outcomes than their nonsmoking peers. For example, a review of 48 relevant studies found marijuana use to be associated with reduced educational attainment (i.e., reduced chances of graduating).

A study, published in the American Journal of Psychiatry followed over 3,800 adolescents from 31 Montreal-area schools over four years. The teens, who started participating in the study when they were 13, agreed to provide annual reports of how frequently they used marijuana and alcohol. They also took computer-based cognitive tests that measured recall memory, perceptual reasoning, inhibition and short-term memory. Beyond the role of cognition in vulnerability to substance use, the lasting effects on important cognitive functions of adolescent cannabis use appears to be more pronounced than those observed for alcohol.

The average rate of regular teen marijuana use in the legalized states of Alaska, Colorado, Oregon, and Washington is 30% higher than the U.S. rate as a whole, according to data from the National Survey on Drug Use and Health.  Colorado is the top state in the nation for first time marijuana users, and its rate of first-time users has more than doubled in the last decade.  Use among people 18 and over has also skyrocketed, as well as use among young adults.

Increase in drugged driving crashes (Report of May 2018)

Nearly six in ten people who use recreational cannabis in states where it is legal drive while high, according to polling in a report dated May 21, 2018.

The Governors Highway Safety Association found that forty-four percent of fatally injured drivers tested for drugs had positive results in 2016, up more than 50 percent compared with a decade ago. Furthermore, more than half the drivers tested positive for marijuana, opioids or a combination of the two.

A study conducted by the Centennial Institute found that for every one dollar in tax revenue from marijuana, the state spends $4.50 as a result of the effects of the consequences of legalization. Used in the study was all available data from the state on hospitalizations, treatment for Cannabis Use Disorder (CUD), impaired driving, black market activity, and other parameters to determine the cost of legalization.

Safety concerns are often a company’s primary reason for prohibiting marijuana in the workplace and are a valid basis for banning the drug. Marijuana use has been linked to an increase in job accidents and injuries.  The National Institute on Drug Abuse notes that the short-term effects of marijuana include impaired body movement, difficulty with thinking and problem-solving, memory problems, and an altered sense of time.

Despite legalization, five years into its experiment with legal, regulated cannabis, Washington state is finding that pot still attracts criminals and a thriving black market.  Legalization was also supposed to end pot smuggling, but that hasn’t happened either. The reason is simple economics. Overproduction in Washington and other states with legal pot, such as Oregon, has led to a market glut — and rock-bottom wholesale prices in the legal market.

Former U.S. Rep. Patrick Kennedy is urging Illinois lawmakers not to legalize marijuana, warning that the commercialization of pot will have “devastating consequences” for public health.  In a letter, Kennedy warned that the drug is being put into kid-friendly gummy bears, ice creams and sodas, and that high-potency extracts are far more powerful than grass of the past.  Kennedy, son of the late Sen. Ted Kennedy, is the co-founder of Smart Approaches to Marijuana, which lobbies against legalization nationwide. After getting in a car crash in 2006, he wrote a book, “A Common Struggle,” about his fight with bipolar disorder and abuse of OxyContin and alcohol.

Let your IL representatives hear from you. Legalization of the dangerous drug of marijuana is not all it has been cut out to be in states where legalization has taken place, except by those who wish to smoke pot.  Doesn’t IL already have enough problems of its own without adding pot legalization to the mix of its many woes? Further links to explore:

What You Need to Know is a lesson on documents and double standards. Suddenly everyone has classified documents and everyone is spinning the stories … END_OF_DOCUMENT_TOKEN_TO_BE_REPLACED

For Immediate Release: January 26, 2022Contact: Ryan Hite, Communications Director Solution Staring Us In the Face to Save American Lives: Shut the … END_OF_DOCUMENT_TOKEN_TO_BE_REPLACED

What You Need to Know is the House GOP Must Exercise Power of the Purse. We’re back to following the money this week, this time in Congress! House … END_OF_DOCUMENT_TOKEN_TO_BE_REPLACED

Proving once again that he is in touch with ordinary Americans, Donald Trump selected education for the first video message of his 2024 presidential … END_OF_DOCUMENT_TOKEN_TO_BE_REPLACED