The election of 1980 gave American voters a stark contrast of the two parties and candidates – Democrat President Jimmy Carter and Republican Governor Ronald Reagan. Reagan relied on the grassroots efforts of patriots like Phyllis Schlafly to champion his cause, and his resulting victory is viewed historically as the great culmination of the conservative movement started by Phyllis’s book A Choice, Not an Echo in 1964. While times have changed, the principles Phyllis wrote about to mobilize conservatives for Reagan are as useful today as ever. 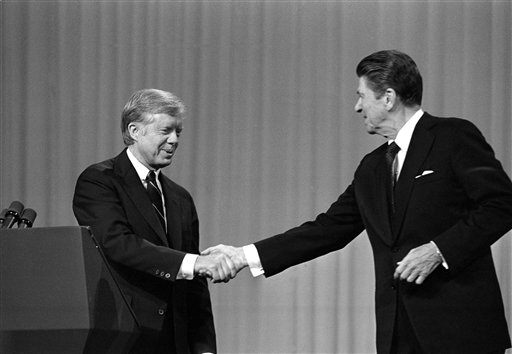 Phyllis Schlafly held to a clear set of convictions on which she would not surrender. However, she was not an idealist in the sense that she would only support the “perfect candidate.” In fact, she readily acknowledged that there is no such thing. She advised conservatives to start their influence of election politics by choosing which issues are most important to them and then choosing the candidate who most closely aligns with your core issues.

Before jumping in a campaign, you must also learn about the process. Phyllis said, “Knowing how the election process functions, how campaigns are won, and who the candidates are is the power to make the policies you want on the issues you care about.” Even the most energetic patriot cannot make substantial change without an understanding of the process to channel his energy in the right direction.

While most conservatives see tolerance as little more than a liberal buzzword for pointless name-calling, some conservatives really would do well to learn the value of political tolerance. Phyllis put it this way: “You must be tolerant enough to allow voters to vote for your candidate for the reasons of their choice.” Phyllis Schlafly recognized that people with diverse beliefs can still come together to achieve great things on issues where they can find common ground.

Phyllis Schlafly was more than just an activist; she was a grassroots organizer. She had the uncanny ability of unlocking potential within passionate men and women who wanted to make real change. Phyllis Schlafly’s proven path to political success has not changed. The foundation of political victory is still hard work and involvement tempered by practical knowledge and discernment.

The new U.S. Supreme Court, with Biden’s Senate-confirmed appointee Ketanji Brown Jackson, began its Term with oral arguments on Monday. Control of the U.S. Senate is to be decided in just five weeks, and our federal judiciary teeters on the edge. Some might wonder why it is so important for Republicans to win the Senate, […]

Phyllis Schlafly Eagles · #WYNK: Who Is Congressman Troy Nehls? | September 28, 2022 #ProAmericaReport The following is a transcript from the Pro … END_OF_DOCUMENT_TOKEN_TO_BE_REPLACED

Phyllis Schlafly Eagles · #WYNK: MAGA Americans Are Being Hunted | September 14, 2022 #ProAmericaReport The following is a transcript from the Pro … END_OF_DOCUMENT_TOKEN_TO_BE_REPLACED

Phyllis Schlafly Eagles · October 5 | Follow the Science on Monkeypox As Americans try to put Covid behind us, another frightening virus has … END_OF_DOCUMENT_TOKEN_TO_BE_REPLACED