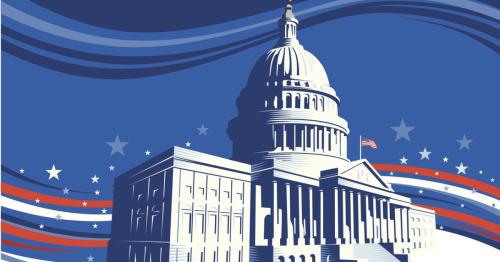 The Left is counting on fear and extreme hatred toward Trump to bring about a change in the US House leadership spurred on by angry voter turnout in the November mid-term elections. But consider this development:

Optimism about the economy, measured by Americans who are optimistic about current conditions and the future, hit an all-time high in CNBC’s All-American survey, the financial news network reported Monday. Fifty-one percent of Americans approve of Trump’s handling of the economy, according to the CNBC survey. This was the second consecutive CNBC quarterly survey showing that Trump’s handling of the economy was viewed positively by the majority of Americans. It further supports the finding Friday from the University of Michigan consumer survey that confidence in the government’s economic policies jumped to the highest level in fifteen years.

Rasmussen was far more accurate in 2016  than the Washington Post/ABC polling which reported that Trump nationwide had a 41 percent approval rating, and Democrats had a 53-42 percent edge in the generic ballot for the House. But inside the 66 districts that were tossups, or only leaning toward one party or the other — the majority makers, or breakers — that lead evaporated into a 46-47 Democrats v. Republicans race. It’s a similar dynamic — driven by Democratic strength in cities, and weaknesses in rural areas — that is driving House and Senate forecasts in opposite directions, amid a campaign close set to be dominated by the president. If you add in the 3 to 5 point bias that Washington Post/ABC showed in 2016, the Republicans are in no danger of losing the House.

See here the debate between Arizona’s Senate candidates Sinema and McSally where Sinema did a Christine “I am an innocent child” Ford routine, while “angry” McSally, like Kavanaugh, grilled her on facts: Even though the race between Sinema and McSally is considered dead even if you just look at the polls, the odds are very good for McSally based on the polling, history, and Sinema’s radical past, plus the Kavanaugh/Trump bump. Read here to learn the 11 freakiest things about Democrat Senate candidate Kyrsten Sinema.  Republican Martha McSally is an Air Force veteran.

Since the New York Times can’t fight back with their Siena polling, the preeminent academically situated polling Institute in New York State, the Times is trying to spin some big advantage with Dem fundraising, reporting that Democrats outraised their Republican opponents in 32 of the closest 45 House races by a total margin of $154 million to $108 million since November 2016

Hillary with her PACs outspent Trump 3 to 1; however, the age of the Internet and a nationalized campaign, thanks to Trump and Kavanaugh, doesn’t need money for ads as much as in the past. Contrast the crowds for Trump (or even Ted Cruz and other Republican candidates) with those for the Democrats, and you see the same enthusiasm gap now for Trump as you saw in 2016.  As Trump tweeted @realDonaldTrump:

“The crowds at my Rallies are far bigger than they have ever been before, including the 2016 election. Never an empty seat in these large venues, many thousands of people watching screens outside. Enthusiasm & Spirit is through the roof. SOMETHING BIG IS HAPPENING – WATCH!”

Consider also President Donald Trump’s re-election effort which raised $18 million in the third quarter, bringing his total since taking office to $108.1 million.  This is an unusual amount for a president in the first two years of his term. The liberal media never considers Trump fundraising ability or Trump’s crowds in their reporting of who is actually winning this election.

Regarding Elizabeth Warren’s presidential aspirations to challenge Trump in 2020, the liberal media tried to spin Warren’s latest DNA release as positive, but it actually shows Warren with more Latin American Indian blood than the Cherokee blood she claimed. Warren, in defending her decision to release her DNA testing, told the Boston Globe’s Editorial Board she went public when she did because that’s when the analysis came back.  The timing of her release didn’t set well with the Democrat Party.

As to why many Native Americans are angry with Elizabeth Warren, their anger is about what it means to be Native American — and who gets to decide. If Warren ever thought she was presidential material, she is fooling herself and so are her advisors.  Kamala Harris’ screeching at the Kavanaugh hearings and her other media events have also not helped Warren.

There is always Uncle Joe Biden waiting in the wings.   Recently it was reported that Biden would likely announce his 4th run for president.  Although opining that age would be an issue — Biden would be 77 if challenging Trump in 2020 — Biden did admit he was being pressured to run, even though he has never been viable outside his own state of Delaware.  It’s not likely that the Left, now defined as Democratic Socialists, would tolerate somebody with a “moderate” image to challenge Trump in 2020. That would mean that the Left would have had to accept the behind the scenes truth.

As of now, Democrats look like they are going to get pounded in the mid-term 2018 elections leaving them in a desperate mood. The hard numbers in four states (Iowa, Florida, Ohio, and Arizona) show a Republican surge of early and absentee ballots requests piling up in impressive numbers. The same is happening in Florida. No wonder the polling is starting to break for Republicans. Nothing can be hidden any more.  Republican voters are also fired up to vote!

What You Need to Know is Ray Epps was in on it! Who is Ray Epps? Congressman Jamie Raskin gave us the answer after the prompting by Congressman Thomas … END_OF_DOCUMENT_TOKEN_TO_BE_REPLACED

Phyllis Schlafly Eagles · September 27 | Do Politicians Care About Teachers? Promises are easy to make and hard to keep, especially in politics. If … END_OF_DOCUMENT_TOKEN_TO_BE_REPLACED

Phyllis Schlafly Eagles · #WYNK: MAGA Americans Are Being Hunted | September 14, 2022 #ProAmericaReport The following is a transcript from the Pro … END_OF_DOCUMENT_TOKEN_TO_BE_REPLACED

What You Need to Know about Priorities & America First. Phyllis Schlafly would give awards to significant people in her life. On these awards … END_OF_DOCUMENT_TOKEN_TO_BE_REPLACED