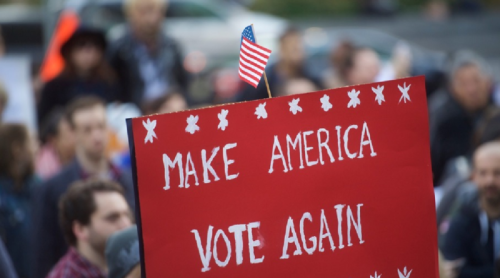 The push to eliminate the Electoral College for the popular vote is on the rise since Nancy Thorner wrote her initial article on the topic for Illinois Review on January 11, 2019, Foolish Illinois lawmakers Electoral College.

The National Popular Vote plan (NPV) guarantees election of the presidential candidate who receives the most popular votes in all 50 states and the District of Columbia.  The plan is a state statute in the form of an interstate compact. It creates an agreement among states to award all of their electoral votes collectively to the presidential candidate who wins the national popular vote.

Passing NPV will guarantee election of the national popular vote winner once the compact has been joined by enough participating states together to hold a majority of electoral votes (270 of 538).  Until that point, a state’s current rules apply.

Illinois has already jumped on board the band wagon to eliminate the Electoral College, when the National Popular Vote bill was first introduced on January 19, 2006.  The Illinois Senate bill SB 2724 was sponsored in 2006 by Senators Jacqueline Collins (D), Kirk W. Dillard (Du Page County Republican Party Chair), and James T. Meeks (I).  In the House HB 5777 was sponsored by Representatives Robert S. Molaro (D) and Jim Durkin (R). By the end of 2006, the Illinois bills had a total of 48 sponsors. (At the time there were 118 House members and 59 Senators in Illinois).  On April 7, 2008 Illinois became the third state to enact the National Popular Vote bill.

How stupid and corrupt it was for Illinois State Senator Kirk W. Dillard (then Du Page County Republican Party Chair), to have enthusiastically supported the bill and to say in 2006:

“This isn’t a Democratic or Republican issue to me. It’s important that people have faith that in the election of the most important office in the world that their vote will count. I’m proud to sponsor legislation that will hopefully result in presidential candidates showing up and working to meet voters in my state.”

Consider also that the late former US Senator from TN, Fred Thompson, was national spokesman for the NPV.

Legislators in all 50 states and the District of Columbia have introduced NPV legislation.  As of March 12, 2019, NPV legislation has been enacted into law in 13 states with a combined 181 electoral votes, two-thirds of the way to 270. (CA, CT, CO, DC, HI, IL, MA, MD, NJ, NY, RI, VT, WA).  Colorado, with its nine electoral votes, was the latest state who agreed to the National Popular Vote to Gut Electoral College on February 21, 2019.  What is the common denominator?  All are blue states and generally vote Democrat except Colorado, a swing state.

Now the compact just needs to bring on enough new states to get 89 additional electoral votes and it would radically change how the U.S. picks its president.

The Nevada state legislature is dangerously close to passing a bill that could nullify the votes of their own constituents.  AB 186 will be voted on by the Nevada Assembly Legislative Operations and Elections Committee on Thursday, March 4, 2019.  AB 186 in Nevada, as in other states where NPV has passed, seeks to undermine our Constitution’s carefully thought out Electoral College for presidential elections by instituting a National Popular Vote (NPV).  Accordingly, it would bind member states’ electors to the national popular vote winner, even if Nevada voters did not support that candidate. If AB 186 passes it could move very quickly through Nevada’s state legislature to nullify the votes of their own constituents.  Nevada has five electoral votes to offer.

Proponents of the NPV claim to solve the problem of “disenfranchised voters.”  The truth is, if the NPV were adopted, it would silence the voices of millions of Americans in Nevada and across the country.  Why so?  Nevada citizens might overwhelmingly select candidate “A” for president, but he or she would not receive Nevada’s electors if other more populated states like California and New York select candidate “B.”

We are told that Clinton got 2.8 million more votes nationwide than did Trump.Whether she really did or didn’t isn’t the point because that’s what the vote counters said.

With the NPV scheme in place, the vote counters can fabricate enough votes to steal every presidential election.  Even if an election were honest in most States – a few large States where cheats control the machines – can throw a national election.  Vote harvesting is already being practiced by Democrats where seats are won post-election when suddenly uncounted ballots show up.  This same practice will likely become standard practice in all states should enough states pass NPR to reach that magic number of 270.

The NPV is yet another attempt made by power hungry people to undermine and eliminate our Republican form of governance and replace it with a liberty-shredding centralized government.  It is a wolf in sheep’s clothing pretending to be bipartisan and committed to serving the needs of the nation.

NPV is further being pushed by some of the same policymakers who seek to rewrite our U.S. Constitution through an Article V Constitutional Convention.  Both are dangerous to our Constitution and to our Republic and must not be permitted to come to fruition.

13 states have signed onto this compact . . . equating to 181 electoral votes — only 270 are needed to trigger the compact!  The million-dollar question is whether legislators of enough states will be astute enough to reject the narrative being presented to them by those who are trying to sell them a false bill of goods.

Phyllis Schlafly Eagles · February 3 | "Woman" Is the Word of the Year The internet is a powerful tool that most of us use every day. … END_OF_DOCUMENT_TOKEN_TO_BE_REPLACED

What You Need to Know is Tucker is allowing the will of the people to be heard! When a huge block of Republicans and so-called conservatives are … END_OF_DOCUMENT_TOKEN_TO_BE_REPLACED