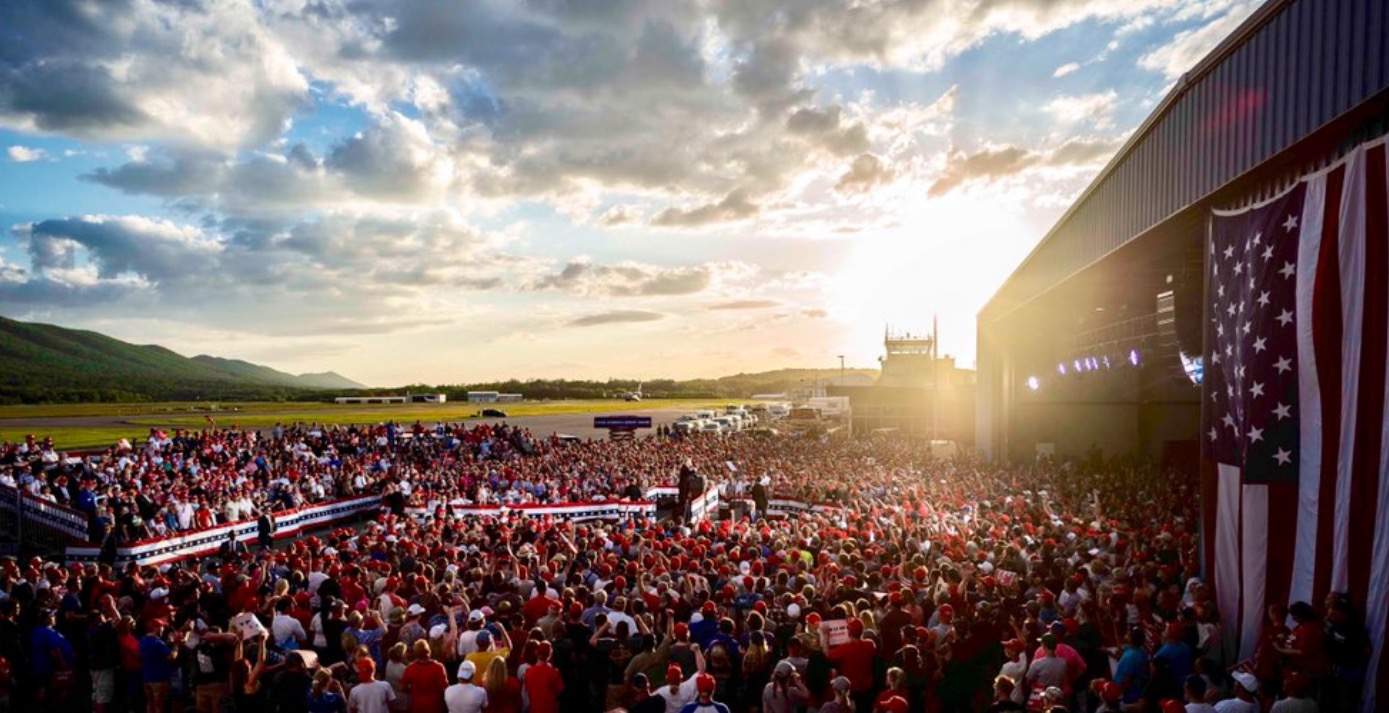 President Trump and Joe Biden just held dueling rallies in Pennsylvania, but the difference in enthusiasm was striking.  After Biden’s campaign kickoff on Saturday drew a respectable crowd to a cordoned-off thoroughfare in downtown Philadelphia, Trump attracted thousands more to a raucous rally on Monday inside a hangar at the Williamsport Regional Airport.

Sandwiched symbolically between the two presidential front-runners was Sunday morning’s planned destruction of Bethlehem Steel’s empty former headquarters, which for 50 years was the largest building in Pennsylvania’s Lehigh Valley.  Trump wants to rebuild America’s manufacturing might in Pennsylvania and elsewhere, while Biden’s platform is to forget about how China has been eating America’s lunch due to bipartisan policies of globalism and free trade.

At Trump’s rally, attendees cheered as the President recognized a supporter who wore a suit designed like a red brick wall and carried a sign that said “Build me.”  The elderly Biden, by contrast, was low energy and low-key, oddly pleading for “unity” while denouncing Trump for “division.” 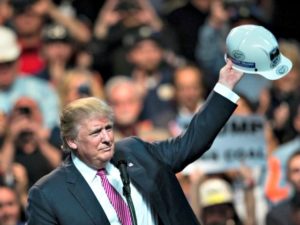 Trump wants to rebuild America’s manufacturing might in Pennsylvania and elsewhere, while Biden’s platform is to forget about how China has been eating America’s lunch due to bipartisan policies of globalism and free trade.

Biden’s rivals, though, are even less credible.  “Beto” O’Rourke, who should be called “Beta” like an unfinished app, has dropped like a stone after launching his campaign by saying he was “born to run.”

“Born to lose” is more like it.  Losing a Senate race despite having money to burn is not exactly a stepping-stone to the presidency, and “Beta” looks like a guy with zero chance of defeating the formidable Trump.

Then there is Senator Kamala Harris, a multi-racial female who has positioned herself as the most “diverse” candidate in the Democratic field.  The former California attorney general, who married another California lawyer at age 50 and has no children, would be a tough sell to the ex-steelworkers and coal miners in Pennsylvania.

Kamala Harris has a radical plan to shift wages from gritty blue collar jobs typically undertaken by men, to soft, safe jobs typically filled by women.  To overcome the purported pay gap between men and women, she would hit companies with fines of 1% of their profits for every 1% in the wage difference between the more dangerous male jobs and the more comfortable women’s jobs.

Her proposed interference with the jobs market includes nearly every bad idea opposed by Phyllis Schlafly, all in one package.  The theory of “comparable worth” was discredited in the 1980s, but Senator Harris has renamed it “equal pay” in order to falsely imply that men and women are being paid unequally for the same work.

Harris figures that her fines would be heavy enough to generate $180 billion over 10 years, money that would be used to pay employees who take family and medical leave.  Companies would be on their own to cope with the burden of hiring, training and supervising temporary replacement workers and then laying them off after the employee returns to work.

Like other socialist schemes being floated by Democratic candidates, Sen. Harris’s harmful proposal would bring the Trump jobs boom to a screeching halt.  It would be particularly hurtful to men working blue-collar jobs who are rightly compensated for the higher risk and unpleasant working conditions they endure.

It is no fun working in road construction during the hot summer, as any driver can observe from the comfort of an air-conditioned car.  Construction workers, who are almost entirely men, deserve to be paid more than easy jobs in plush air-conditioned facilities, which are taken mostly by women.

Equal pay for equal work has been required by federal law since 1963, and any woman who is paid less for doing the same work can hit the jackpot by suing over it.  But equal pay for unequal work is unAmerican, and has been properly rejected by Congress and the federal courts.

Logging, roofing, collecting garbage, and installing power lines are difficult, unsafe jobs that result in greater compensation than secretarial jobs where the biggest risk is suffering a paper cut.  Nothing prevents a woman from trying to wield a jackhammer on a hard concrete pavement, but few women want to.

Senator Harris whines that “women who work full time are paid just 80 cents, on average, for every dollar paid to men.”  But many women opt out of the workforce to raise children, so they will make less due to less job-related experience.

The steelworkers and coal miners who built Pennsylvania were mostly men.  Pennsylvanians want those jobs back, but Sen. Harris’s demand that men make no more money than women will not create these jobs for men.

Billy Joel’s song “Allentown” was really about the collapse of the steel economy in nearby Bethlehem, but Allentown is easier for lyrics to rhyme with.  President Trump promises to revive that Pennsylvania economy, and the immense crowds there show that he is the real music to their ears.

What You Need to Know is Trump is stronger than Biden. Our American leaders sending tanks and weapons to escalate the war in Ukraine aren’t in line … END_OF_DOCUMENT_TOKEN_TO_BE_REPLACED

What You Need to Know is we are in a proxy war with Russia. Until now, we’ve been able to at least try to say we have given Ukraine defense weapons … END_OF_DOCUMENT_TOKEN_TO_BE_REPLACED

What You Need to Know is we’re in a new pro-life America. Today’s March for Life is the first during which we can celebrate the overturn of Roe v. … END_OF_DOCUMENT_TOKEN_TO_BE_REPLACED

What You Need to Know is the House GOP Must Exercise Power of the Purse. We’re back to following the money this week, this time in Congress! House … END_OF_DOCUMENT_TOKEN_TO_BE_REPLACED

Proving once again that he is in touch with ordinary Americans, Donald Trump selected education for the first video message of his 2024 presidential … END_OF_DOCUMENT_TOKEN_TO_BE_REPLACED

Phyllis Schlafly Eagles · #WYNK: Trump's Record is Baked In | January 30, 2023 #ProAmericaReport The following is a transcript from the Pro … END_OF_DOCUMENT_TOKEN_TO_BE_REPLACED

What You Need to Know is Trump’s record is baked in. He’s already been torn apart every which way and his record stands with all the things you like … END_OF_DOCUMENT_TOKEN_TO_BE_REPLACED

What You Need to Know is a lesson on documents and double standards. Suddenly everyone has classified documents and everyone is spinning the stories … END_OF_DOCUMENT_TOKEN_TO_BE_REPLACED