“Is this person a citizen of the United States?”  This 2020 census question, or something similar, was asked on every U.S. census from 1820 through 1950, and afterward on the long-form census through 2000. Even now, and ever since 2005, a citizenship question has been included in the annual American Community Survey (ACS) by the federal government.  Not even President Obama stopped that. 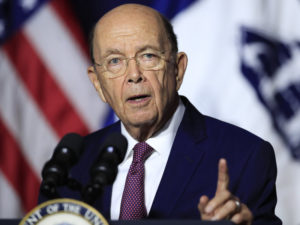 President Trump, through his Commerce Secretary Wilbur Ross, restored this question about citizenship to the 2020 census, and a barrage of lawsuits ensued to stop it.

So why all the fuss about this citizenship question now? The census is used to apportion the Electoral College and representation in Congress, so there is political significance to puffing up the population count for California and other sanctuary states by including illegal aliens as legal residents.  Dollars are also at stake because more people in a state mean more federal dollars flowing to it.

The census must count every person living in the United States, but citizens and aliens should be counted separately in every state and electoral district.  President Trump, through his Commerce Secretary Wilbur Ross, restored this question about citizenship to the 2020 census, and a barrage of lawsuits ensued to stop it.

There is nothing racist in asking about citizenship.  It may be racist, or at least anti-American, to oppose a citizenship question so that illegal aliens are counted as citizens and sanctuary states unfairly obtain more congressmen and Electoral College votes than they deserve.

There is no reason to expect any American citizen to be hesitant to respond if he is a citizen.  Employers and schools ask about citizenship, as does the federal government on application forms.

Don’t buy the Democrat outrage over asking people about their citizenship. No one’s feelings will be hurt and no one will be suppressed from answering this decennial task. Knowing who in America is subject to our laws, who receives the benefits of citizenship, and where they live is and always has been vital to the proper function of America. Don’t be fooled by fake outrage from the left! Let’s make the Census great again.

“I never like to take credit for anything,” Donald Trump told a hostile reporter last month. “God made the decision,” he added recently about the … END_OF_DOCUMENT_TOKEN_TO_BE_REPLACED

What You Need to Know is Biden is marching toward America Last. Even as our continue to get entangled in NATO and their picking a fight with Putin. … END_OF_DOCUMENT_TOKEN_TO_BE_REPLACED