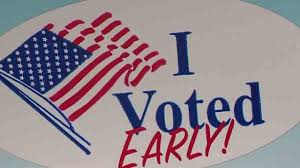 Early voting is a nightmare for presidential primaries. Nowhere was this more clear than in California on Super Tuesday.

With most traditional elections, votes can be counted on the spot and results can be posted within hours of the polls closing. Thanks to early voting, the results from California could not be known right away like in other Super Tuesday states. It takes time to tally mail-in votes. Time for delivering and opening mail causes weeks to go by before final results can be tallied and announced for early voting in high-turnout elections. That ultimately results in chaos and a loss in public confidence. Even in a general election, the votes from California continue to be counted for weeks after Election Day.

Some Democrats are telling each other not to cast ballots early because they recognize the self-inflicted harm caused by early voting. These smart Democrats know early voting could easily lead to a brokered convention or a repeat of their fiasco in Iowa when results were delayed.

An experienced Democrat campaign manager from California named Darry Sragow went on the record saying “Sure, I’d wait. If one of the candidates trips up three days before the primary and I already cast my vote, I’m gonna regret it.” Sragow is right to call out the dangers here. If the candidate you vote early for drops out, or changes his position in an unacceptable way, or commits an unforgivable gaffe, you’re stuck.

Some say we should just make it so early voters can go in and change their votes on Election Day if they want to, but that’s a ridiculous idea. Election officials in Democrat strongholds have enough trouble counting up votes without rampant election fraud. We don’t want to create more opportunities for them. Besides, a re-casting system like that would be totally cost-prohibitive and almost impossible to implement.

Phyllis Schlafly Eagles · #WYNK: Trump is Stronger Than Biden | January 27, 2023 #ProAmericaReport The following is a transcript from the Pro … END_OF_DOCUMENT_TOKEN_TO_BE_REPLACED