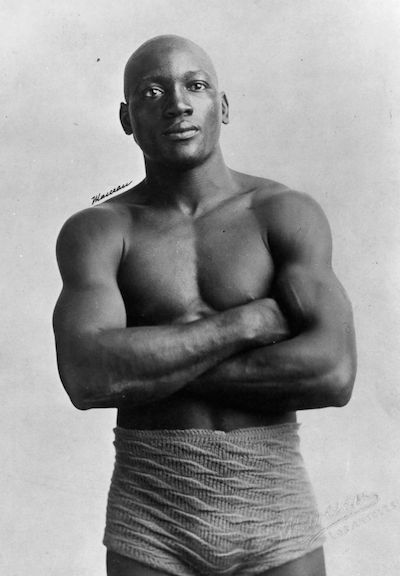 “Sylvester Stallone called me with the story of heavyweight boxing champion Jack Johnson,” tweeted President Donald Trump on Saturday, April 21, 2018. “His trials and tribulations were great, his life complex and controversial. Others have looked at this over the years, most thought it would be done, but yes, I am considering a Full Pardon!”

While Jack Johnson is most well known as a the first African-American to be heavyweight boxing champion, he was also an inventor and entrepreneur. Johnson was the son of two ex-slaves, born in Galveston, Texas in March 1878. What enabled him to invent?  Did his boxing talent as a defensive counter-puncher, ability to play two musical instruments, and his self-confidence help?

The Chicago Tribune interviewed Johnson on December 10, 1910 and December 12, 1910, and reported on his hydraulic lift invention for which he had just obtained a patent.  The December 12 article features this photograph of Johnson holding a model of his invention. The December 10 article features a headline that says Fighter Will Show Friends Today Working Principles of Product of Mind.  Johnson says that he “secured the patent a week ago” but I could not find a patent number for his invention searching on Google Patent.  The Chicago Tribune’s interviews reveal that Johnson wanted to build a factory on Chicago’s south side to manufacture his hydraulic lifter machines and make enough money to leave boxing and then retire.  Johnson “said there is not enough money in the world to purchase his holding.”

According to the 2004 book Unforgiveable Blackness: The Rise and Fall of Jack Johnson by Geoffrey C. Ward, Johnson invented twice while in prison.  U.S. Patent No. 1,413,121 (Priority March 23, 1921; Granted April 18, 1922) for improvements to a hand wrench regarding adjustable grip and repair and U.S. Patent No. 1,438,709 (Priority April 4, 1921; Granted December 12, 1922) for preventing car theft by shutting the fuel supply. Johnson entered prison on September 21, 1920 and departed July 9, 1921.  According to the New York Times article Johnson was prisoner number 15,461 and was made orderly of the prison baseball park and that the warden intended Johnson to become director of athletics. Ward’s book says that Johnson was inventing in a variety of areas including “a new kind of coupler for railroad cars, a flying machine, even a treatment for tuberculosis.”  Ward briefly mentions that Johnson tried to borrow money against his patent medicine recipe.

This timeline indicates that Johnson’s inventing activity occurred before, during and after his prison time.  His second patent was created with his friend and fellow inmate James Pearl Thompson.  Both patents state the location for the patent is Leavenworth, Kansas. This is the location of the US prison where Johnson spent time.

As I read the news of President Trump considering pardoning Johnson I hope that my brief look into history can help the public and journalists better appreciate the full spectrum of what an individual can accomplish in America, thanks to invention and our patenting system.  I fear that we take inventors and patents for granted or worse ignore the history and how it can help inform our understanding today of people and what they went through.

In his 2015 book Crippled America: How To Make America Great Again, Donald J. Trump talks about his Uncle John G. Trump the inventor. Commerce Secretary Wilbur Ross and USPTO Director Andrei Iancu have publicly discussed their plans for celebrating the granting of the 10 millionth patent (sometime in next few months).  Perhaps President Trump, in his deliberations of this pardon request by Sylvester Stallone for Jack Johnson, will cut through any bias and consider the full spectrum of Johnson’s character, including what he was able to do as an American inventor.

What You Need to Know is Happy birthday to America! It might not seem like it, but things are really really good here in America. The left act like … END_OF_DOCUMENT_TOKEN_TO_BE_REPLACED

Phyllis Schlafly Eagles · #WYNK: Happy birthday to America! | July 1, 2022 #ProAmericaReport The following is a transcript from the Pro America … END_OF_DOCUMENT_TOKEN_TO_BE_REPLACED

Phyllis Schlafly Eagles · #WYNK: Who's Against Trump | June 13, 2022 #ProAmericaReport The following is a transcript from the Pro America … END_OF_DOCUMENT_TOKEN_TO_BE_REPLACED

Phyllis Schlafly Eagles · July 6 | Will Globalists Build the Future? Amid chaos on many fronts, globalists march forward into the night. Klaus … END_OF_DOCUMENT_TOKEN_TO_BE_REPLACED

“This is about the future of the liberal world order and we have to stand firm,” declared Biden Administration official Brian Deese. “Liberal world … END_OF_DOCUMENT_TOKEN_TO_BE_REPLACED