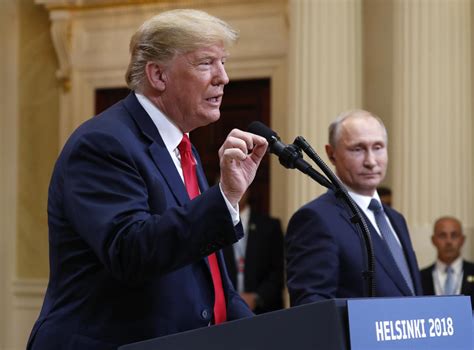 President Trump’s press conference with Russian President Vladimir Putin was remarkable in how Trump refused to pay homage to liberal fiction about hackers stealing the last election.  Instead, Trump went on the offensive and laid blame for deteriorating relations with Russia where blame is due:  at the doorstep of Mueller’s delusional investigation.

Many on the Left dislike Russia now because it is an increasingly Christian country that changed the name of Leningrad to Saint Petersburg and even enacts pro-life laws.  Communism was overthrown in Russia more than a quarter-century ago, and its trend toward conservative values today angers Leftists immensely.

President Trump batted away the anti-Russian questions at the presser in Helsinki, and explained that there was “zero collusion” between hackers and his “clean” campaign that trounced Hillary Clinton in 2016.  After more than a year of looking for collusion and not finding any, Mueller’s investigation should be winding down rather than winding up.

But last week, in a transparent attempt to disrupt the Trump-Putin summit, Mueller indicted the equivalent of 12 more ham sandwiches.  Elusive hackers, a high-tech counterpart to witches of yesteryear, supposedly entered the Democratic National Committee’s computers when no one was looking and had no discernible impact on any election results.

Mueller was never given a blank check to investigate thousands of hackers, who may merely be teenage boys engaging in mischief on the internet from the basement of their parents’ homes.  Mueller was authorized to investigate alleged collusion by the Trump campaign, of which there was no evidence, and tens of millions of wasted taxpayer dollars later, there is still no such evidence.

So far Mueller has indicted 25 Russian individuals and three Russian companies on charges that Mueller knows he will never have to prove in a court of law.  At one hearing an attorney pointed out to the judge how one of the companies did not even exist at the time it was alleged to have done wrongdoing.

Senator Rand Paul stands with President Trump in repeatedly criticizing Mueller’s investigation as a “witch hunt,” pointing out that Trump’s alleged nefarious ties with Russia are a “hoax.”  On Sunday, Senator Paul explained that it is a “waste of time” to attempt to penalize Putin for alleged interference by Russian hackers in American elections.

Meanwhile, Never-Trumpers came out of the woodwork once again to try to find fault with Trump.  Nebraska Senator Ben Sasse, an ally of the Koch brothers and other Never-Trumpers, declared from the Senate floor that “everyone in this body should be disgusted by what happened in Helsinki.”

Sen. Sasse himself has an abysmal approval rating in the strongly conservative state of Nebraska, as Never-Trumper Sen. Jeff Flake has in Arizona.  Nebraska Governor Pete Ricketts, a Trump supporter, is being urged to run against Sasse in two years but so far Ricketts has declined in order to focus first on another term as governor.

Retiring congressman Trey Gowdy, a rising star until he opposed Trump, has apparently also fallen for Mueller’s indictment stunts.  Gowdy absurdly suggested that Trump should ask Putin where the 25 Russian witches, that is, hackers, can be picked up.

Gowdy has given Mueller more job security than anyone else in D.C., by implicitly inviting him to spend years indicting more ham sandwiches.  No problem, the American taxpayer will be stuck with the tab of tens of millions of dollars.

President Trump’s takedown of the media concerning Mueller is an encore to draining the swamp of the North American Treaty Organization (NATO).  That entrenched bureaucracy has been bilking the American taxpayer for years while we get nothing in return.

NATO developed as a counterweight to the communist Soviet Union, but with Russia becoming more conservative than Europe it is unclear why we are still spending billions on NATO.  Its largest country, Germany, is dependent on Russia for natural gas and no amount of American troops in Europe can force Russia to turn that pipeline on if she were one day to shut it off.

“Germany is totally controlled by Russia, because they will be getting between 60 and 70 percent of their energy from Russia and a new pipeline,” observed Trump at the opening of the recent NATO summit.  “It’s a very bad thing for NATO, and I don’t think it should have happened,” he properly explained.

NATO member Poland, also a formerly communist country that is increasingly conservative, immediately praised Trump’s criticisms of Germany’s self-defeating globalism.  Poland is buying natural gas from the United States and President Andrzej Duda astutely observed that “one of the most important goals for the European Union in the energy sector” should be to avoid dependency on any particular foreign country.

Globalists are not pleased by President Trump’s one-two punch abroad.  But standing against globalism plays well with the American voter, as it should.

What You Need to Know is Biden is a racist President! Politico gives you a sense of what the left is pushing. Here’s a recent article from Politico … END_OF_DOCUMENT_TOKEN_TO_BE_REPLACED

What You Need to Know is we need to fight our way through the narrative machine! The Narrative Machine is comprised of three parts 1) Big Tech, 2) Big … END_OF_DOCUMENT_TOKEN_TO_BE_REPLACED

Phyllis Schlafly Eagles · April 7 | Trump Can't Be Controlled In the battle for the soul of the Republican Party, the two sides are the 74 … END_OF_DOCUMENT_TOKEN_TO_BE_REPLACED

What You Need to Know is the Narrative Machine’s “January 6 Insurrection” story is falling apart. They crafted a fantasy that the MAGA rally was … END_OF_DOCUMENT_TOKEN_TO_BE_REPLACED

Phyllis Schlafly Eagles · April 19 | When Will the Never-Trumpers Learn? The second round of the Democrats’ impeachment sham is like the sequel to … END_OF_DOCUMENT_TOKEN_TO_BE_REPLACED

What You Need to Know is it’s Big Tech and Big Media vs We the People. Project Veritas’s latest undercover reporting laid bare that CNN is a partisan … END_OF_DOCUMENT_TOKEN_TO_BE_REPLACED