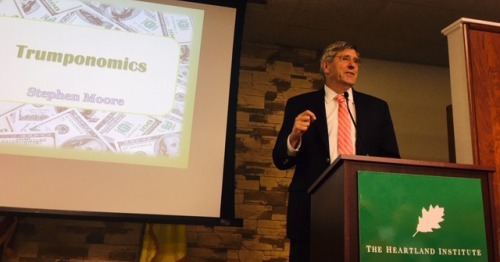 Stephen Moore spoke about Trumponomics: Inside the America First Plan to Revive Our Economy, a new book written by Moore and co-author Authur B. Laffer, Ph.D.  In Trumponomics, Moore and Laffer offer a well-informed defense of President Trump’s approach to trade, taxes, employment, infrastructure, and other economic policies, as well as an insider’s view on how Trump operates in public and behind closed doors, his priorities and passions, and his greatest attributes and liabilities.

Stephen Moore is a former member of The Wall Street Journal’s editorial board and the Distinguished Visiting Fellow for the Heritage Foundation’s Project for Economic Growth.  Arthur B. Laffer, the father of supply-side economics, was a member of President Ronald Reagan’s Economic Policy Advisory Board.

Both Moore and Laffer worked as senior economic advisors to Donald Trump in 2016, traveling with him, frequently meeting with his political and economic teams, working on his speeches, and representing Trump as surrogates.  Currently, they are members of the Trump Advisory Council, along with Larry Kudlow. They meet with Trump regularly to form a triumvirate of economic advisors.

Moore arrived late when a tornado warning in Washington, DC delayed his flight for an hour.  Dan Proft, as designated Master of Ceremony, filled in before Moore arrived.  Moore is a frequent guest on Proft’s radio show on AM 560 The Answer.

In speaking about his nomination to the Federal Reserve Board, Moore referenced an editorial in The Wall Street Journal saying he was defeated not because his ideas were wrong, but because they were right. Moore went on to express his appreciation for President Trump in remaining supportive of his nomination. Trump even told Moore to get back in the race and not give up, when Moore announced he was withdrawing his nomination.

In discussing how he first came to work for President Trump, Moore had this story to tell:

Republicans were in the same place where Democrat are today with many candidates running for office, 16 candidates in all, four years ago.

When Trump asked Moore to be on his team, Moore wasn’t sold at first on the idea. He even had a negative opinion of Trump. Undecided, Moore walked into Trump’s office with uncertainly, only to walk out with “stars in his eyes.”  As Moore said, “Trump might be a jerk in public, but he’s a wonderful person in private.”  At the time Moore perceived Trump to be a winner. It was thought that Trump won the 2016 election because of the expressed rage coming from members of both parties, which enabled Trump to attract blue collar workers to his ranks of supporters.

When Trump won the presidency, the Left predicted Trump would usher in an economic depression and be the worst president ever for the economy.  Now the Left is having a difficult time reconciling the best economy in 20 years, which explains why candidate Joe Biden is out telling the public that the robust Trump economy is the result of policies put in place by President Obama.

But how could this be so?  As Moore explained, when Trump took over the presidency from Obama, GDP was only 1.5 percent.  Now it’s at 3.2 percent, double the rate. The labor rate is the best in 50 years for blacks, Hispanics, and females. This didn’t happen by accident.  The upturn in the economy happened because Obama and his policies have been replaced by Trump and his free-market agenda.

Moore spoke of Trumponomics as the product of two factors:

2.         Growth is everything, the assumption being is when the economy grows debt will be stabilized.

As to the size of this nation’s burdensome debt, Moore placed blame in large measure to the entitlement programs.

Moore came to President Trump’s defense when Trump accused the Fed of holding back economic growth because of tight Fed monetary policy.  Moore explained two bad decisions made by the Fed.

Trump was vindicated in March when the Federal Reserve left interest rates unchanged, with no more hikes most likely in store for the year. Moore believes the Fed rate is still too tight and should be cut by 0.25 percent.

As to the “Trump Effect”:

1.         Small business optimism:  Moore related how 24 hours after Trump’s election there was a big spike up in small business confidence.

3.         Deregulation: In his first year, Trump cut regulations by 36 percent.  For every new regulation added, 20 were eliminated.

As to trade, Moore was not with President Trump in the beginning, believing tariffs were a bad idea. To which Trump said:  “All I want is a level trading field.”  Moore, upon looking at the evidence, admitted Trump had a point. China’s tariffs are three times higher than those imposed by the United States on China. In most other countries tariffs are two times greater.

Moore has one point of contention with Trump, auto and steel tariffs. Trump seems obsessed by the trade deficit with China. Dealing with China is difficult because Chinese leaders do not always play by the rules. Related was China’s recent withdrawal from a trade proposal that was being negotiated between China and America.  Even so, Moore believes Trump has picked the right time to get tough with China on trade. Presently America has the upper hand in being able to negotiate through strength. “If we can’t trade with China we will sneeze, but China will freeze.”  Moore believes a deal will be made with China.  If this happens before the end of the year, Moore predicts there will be huge surge in the economy. A question raised was whether China will wait out the Trump presidency in favor of dealing with a Democratic president.

In the past an incumbent president has never failed to win a second term when a sense of economic security was prevalent. If these were normal times Trump would win by a landslide in 2020. But these are not normal times, said Moore, when 47 percent of all Americans still believe President Trump colluded with Russia to increase his chances of winning the 2016 presidential election, despite a two-year, $50 million investigation that cleared Trump of any collusion. The Left’s push for socialism and its willing audience among the young and many Americans who should know better, coupled with the intense anger and hatred of many Americans toward President Trump could make for an interesting election in 2020.

Phyllis Schlafly Eagles · #WYNK: China's Hooking Us on Fentanyl, TikTok | October 18, 2022 #ProAmericaReport The following is a transcript from the … END_OF_DOCUMENT_TOKEN_TO_BE_REPLACED

The Deep State in Washington, D.C. just offered to debrief Trump Administration officials about the hot air balloons that have invaded our airspace … END_OF_DOCUMENT_TOKEN_TO_BE_REPLACED

What You Need to Know is balloons in our hemisphere. As the Chinese weather balloon (read: spy balloon) passes over America, it’s a great time to … END_OF_DOCUMENT_TOKEN_TO_BE_REPLACED

Phyllis Schlafly Eagles · #WYNK: Balloons in Our Hemisphere | February 3, 2023 #ProAmericaReport The following is a transcript from the Pro America … END_OF_DOCUMENT_TOKEN_TO_BE_REPLACED

Phyllis Schlafly Eagles · December 9 | Are Supporters of America First Scrooges? It’s going to be a long, cold winter in the United States, but … END_OF_DOCUMENT_TOKEN_TO_BE_REPLACED

What You Need to Know is Lies, Damned Lies, and Biden’s Border Statistics. The Narrative Machine’s media wing and the Biden Administration (including … END_OF_DOCUMENT_TOKEN_TO_BE_REPLACED

What You Need to Know is the Qatar-Europe NGO scandal continues! These global schemes with millions of dollars flowing through non-government … END_OF_DOCUMENT_TOKEN_TO_BE_REPLACED

Proving once again that he is in touch with ordinary Americans, Donald Trump selected education for the first video message of his 2024 presidential … END_OF_DOCUMENT_TOKEN_TO_BE_REPLACED

Phyllis Schlafly Eagles · #WYNK: Trump's Record is Baked In | January 30, 2023 #ProAmericaReport The following is a transcript from the Pro … END_OF_DOCUMENT_TOKEN_TO_BE_REPLACED

What You Need to Know is a lesson on documents and double standards. Suddenly everyone has classified documents and everyone is spinning the stories … END_OF_DOCUMENT_TOKEN_TO_BE_REPLACED

Phyllis Schlafly Eagles · February 8 | Leftist Hollywood's Downward Spiral Looking back on 2022, it is plain to see that Democrat-dominated … END_OF_DOCUMENT_TOKEN_TO_BE_REPLACED