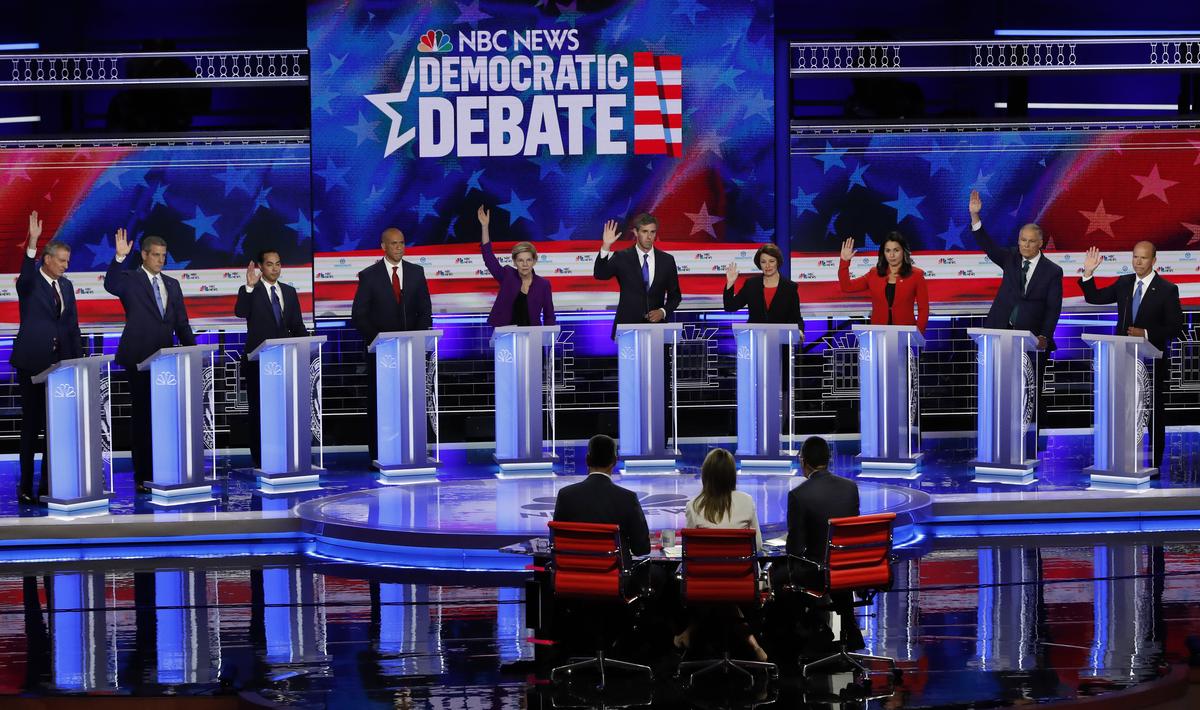 Polling data from Iowa, where the first presidential nomination ballots will be cast next February, show a Democratic Party wishing that some of their candidates would drop out of the race.  Even before the first round of presidential debates, CNN polling showed that grassroots Democrats already want fewer contestants. Nearly 80% of the likely Democratic caucus voters in Iowa indicated their displeasure, in a poll by the Des Moines Register and CNN, at the large number of choices among candidates.  But perhaps the real dismay is at who some of those candidates are.

Bill de Blasio, mayor of New York City, is one of the more-than-two-dozen candidates for the Democratic nomination for president.  He scored a perfect “0” percent support in this poll of likely caucus voters. De Blasio’s supporters for president, if he had any, might say that Iowa is a long way from his liberal base in New York City.  But even in New York State, where Democrats vastly outnumber Republicans, de Blasio’s 29% approval rating is lower than that of Republican President Donald Trump. It’s a mystery why the ultra-liberal de Blasio is running for president despite having such low approval ratings in his heavily Democratic home state.

In that early poll, more than 75% of the candidates for the Democratic nomination had 2% or less support among likely Iowa caucus voters, which makes their bids exceedingly implausible. History shows that only candidates who fare well in Iowa, placing in the top three or nearly so, have a viable chance to win the nomination.

Undeterred, the would-be contenders continue to pitch their candidacies to the Iowa Democrats, perhaps digging their own graves along the way. The left wants nothing more than to remove Trump from office, and prospective nominees are entertaining calls for his impeachment. Ultimately, that radical notion of impeachment drives Americans further away. No one should be surprised that Democrats couldn’t be less excited about their field of candidates for replacing Donald Trump.

Proving once again that he is in touch with ordinary Americans, Donald Trump selected education for the first video message of his 2024 presidential … END_OF_DOCUMENT_TOKEN_TO_BE_REPLACED

Phyllis Schlafly Eagles · #WYNK: Trump's Record is Baked In | January 30, 2023 #ProAmericaReport The following is a transcript from the Pro … END_OF_DOCUMENT_TOKEN_TO_BE_REPLACED

What You Need to Know is Trump’s record is baked in. He’s already been torn apart every which way and his record stands with all the things you like … END_OF_DOCUMENT_TOKEN_TO_BE_REPLACED