Late on a Friday afternoon in July, the Deep State finally partially complied with a court order to hand over its FISA application for wiretaps of a former adviser to the Trump campaign, Carter Page. The heavily redacted, secret application was for repeated wiretaps of Carter Page’s phone, in an unsuccessful attempt to catch Trump in a misstep on a secretly recorded line. 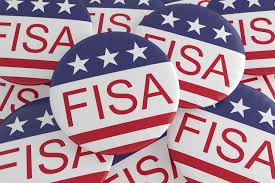 FISA stands for the Foreign Intelligence Surveillance Act of 1978, which authorizes secret proceedings to order wiretaps that would not ordinarily be allowed. This shadow system enabling investigators to obtain wiretaps from a secret court has grown ever since, with no meaningful check or balance.

The FISA application to wiretap the Trump adviser is filled with innuendo and false allegations that came from the Hillary Clinton campaign. Wiretaps of someone connected with a presidential campaign, on such a flimsy basis, bring new meaning to the term “rubber stamp” in describing how the FISA court grants whatever the Deep State demands.

Allies of John Brennan, James Clapper, and others, protest that President Trump lacks the authority to revoke security clearances, but the power of the president to do so can hardly be doubted. They may run to court to enjoin the president on this, but hardly any Supreme Court Justice would rule against the presidential power to decide, in his own discretion, who should not have a security clearance.

Phyllis Schlafly often criticized past Republican presidents who failed to “clean house” and replace the supporters of their defeated opponents. She extracted a promise from President Ronald Reagan that he would never appoint a Deep Stater from the Nixon-Ford era, Henry Kissinger, to anything of significance, and Reagan kept his promise.

Tossing out the entrenched insiders who are so determined to defeat President Trump requires, at a minimum, taking away the special authority they unjustifiably continue to enjoy. John Brennan and James Clapper would still be able to pontificate all they like on television, but they should not be able to do so with the implied authority of an active security clearance.

What You Need to Know is Giorgia Meloni Wins in Italy! Italy just had its elections this week and Giorgia Meloni won and will become the new Prime … END_OF_DOCUMENT_TOKEN_TO_BE_REPLACED

What You Need to Know is The Narrative Machine is Obsessed with Trump! First, it used to be called the Trump Exhaustion Syndrome now the left is … END_OF_DOCUMENT_TOKEN_TO_BE_REPLACED

Phyllis Schlafly Eagles · #WYNK: Who Is Congressman Troy Nehls? | September 28, 2022 #ProAmericaReport The following is a transcript from the Pro … END_OF_DOCUMENT_TOKEN_TO_BE_REPLACED

Phyllis Schlafly Eagles · September 28 | The Politicization of the School Lunchroom There are all kinds of labels on food these days. You may have … END_OF_DOCUMENT_TOKEN_TO_BE_REPLACED

Phyllis Schlafly Eagles · #WYNK: Ray Epps Was In On It! | September 27, 2022 #ProAmericaReport The following is a transcript from the Pro America … END_OF_DOCUMENT_TOKEN_TO_BE_REPLACED

What You Need to Know about Priorities & America First. Phyllis Schlafly would give awards to significant people in her life. On these awards … END_OF_DOCUMENT_TOKEN_TO_BE_REPLACED