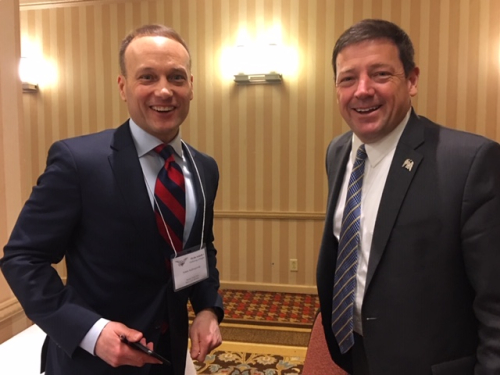 It is not only right, it is crucial that taxpayers know exactly how the money the government demands from them is spent.  It is also critical that those taxpayers interact with those making spending decisions.

That’s the underlying motive for what Adam Andrzejewski does with the non-profit group he founded in Illinois several years ago. It’s making a difference.

Andrzejewski of OpenTheBooks.com was featured at two venues I attended over a two-day period last week.  On Wednesday evening January 23, 2019, he spoke at The Heartland Institute headquarters in Arlington Heights, IL where he was introduced by Lennie Jarratt, project manager for Heartland’s Center for Transforming Education. Tim Huelscamp, PhD is Heartland’s president and CEO.

Two days later on Friday, January 25, 2019, Adam was the featured luncheon speaker at the annual Gathering of Eagles conference in St. Louis, MO with Eagle Leaders from across the country. Ed Martin is President of the Eagle Forum Education & Legal Defense Fund.  Ed was nominated by Phyllis Schlafly on January 31, 2015 to succeed her as the President of both Eagle Forum organizations.

Adam Andrzejewski is an entrepreneur and the CEO/founder of OpenTheBooks. Its mission is to post “every dime, online, in real time.”  Before dedicating his life to public service, Adam co-founded HomePages directories, a $20 million publishing company (1997-2007).  His works have been featured on Good Morning America, ABC World News Tonight, The Wall Street Journal, USA Today, FOX News, and many other prominent news platforms across America.

At both venues, Adam spoke about the Importance of transparency.  As Louis Brandeis wrote in 1914, “Sunlight is said to be the best of disinfectants; electric light the most efficient policeman.”  Today, the Freedom of Information Act and Internet make it possible for Adam Andrzejewski to post on-line spending at all levels of government.

Adam explained how the concept of transparency stems from our Founders’ recognition that our rights come not from government, but from God.  Accordingly, citizens are sovereign. In noting how President Reagan’s success came from empowering the people, Adam referred to Reagan’s Farewell address to the Nation in 1989:

Way before Reagan, the Founders recognized that power is knowledge and wrote transparency into our Constitution in Article 1, Section 9.

Adam believes there is a clear interpretation of what the Founders meant via Internet access; that is, to post “every dime on line in real time.” As to those that resist transparency, it must be assumed they have something to hide.

Adam went on to explain how in 2011 he was able to find out the pay and pensions of all public employees in Illinois at every level of government for the first time ever.  Mentioned was how the salary of a Lyon’s Township treasurer in one year increased from $163,000 to $296.000.  Because people raised their voices, the former Lyon’s Township treasurer is now serving eight years in a penitentiary.  Also cited was a 2014 incident at the College of DuPage in Illinois where over seven years $100 million was hidden in a special account.  Some of it was spent on an upscale French restaurant and a first-class wine cellar.

According to Adam, OpenTheBooks is now revolutionizing U.S. public policy and politics, a concept that has been with us since America’s founding.   Referenced was what Ben Franklin said when questioned about what had been accomplished when leaving Constitutional Center in 1787:   “A Republic if you can keep it.”

As such, our American experiment is dependent on individuals, on citizens, and on you and me holding the political class accountable for tax and spend decisions.  OpenTheBooks.com has been successful in building the largest private data base of public sector expenditures with 5 billion individual government expenditures.  It includes nearly all federal spending since the year 2000; 48 out of 50 state checkbooks; and salary and/or pension records in 60,000 local units of government across the country.

The honorary chairman of OpenTheBooks.com is former U.S. Senator Dr. Tom Coburn, who showed courage in 2004 when in the Senate as a freshman he took on the Republican leadership with expressed disgust for Alaska Senator Ted Stevens’ request for a $300 million earmark for a bridge to nowhere.  Coburn did win the fight and others joined his fight to end earmarks as we know them.  Because of this action, Coburn was stripped of his ability to practice medicine as retaliation by Senate Republicans.  OpenTheBooks.com is carrying forward this Coburn model.

Adam noted two projects that are going forward right now.  One is to gain access to every single public employee’s salary from every public body across the entire country.  So far at OpenTheBooks, 9 out of every 10 public employees at every level of government are accessible as to their name, position, who they work for, and how much they make.  This was accomplished through 60,000 Freedom of Information requests. Find out what is going on in your zip code by checking OpenTheBooks.com. ‘OpenTheBooks’ app is a free download from the Apple ‘App Store’ and the ‘Google Play’ store. It’s a downloadable app for your mobile phone, device or tablet. It allows you to see the government salaries at the local, state, and federal level on your mobile device.  Also displayed in the app is the federal checkbook and State of Illinois checkbook spending.

Here are some findings:

There is a real disconnect between public employees and the level of pay and pension benefits received by those working in the private sector, but what about added bonuses?  Last year a million federal bureaucrats received bonuses that totaled over 1 billion.  How might that be?  99.7% of federal workers are rated highly successful, the basis for a bonus, which is more that the advertised purity of Ivory soap!

Besides salaries and bonuses for the average federal worker, there are other perks such as paid time off.  This amounts to 43 days of yearly paid time off.  The cost to government is more than $20 billion a year.

Last fall letters were placed in the WSJ and USA Today addressed to the attention of President Trump as Commander and Chief to wage war against waste.  Listed were 100 examples of how taxpayer money is wasted.  Asked of the President:

Over a six-year period eight Ivy league schools took federal grants and direct payment of 22 billion from the federal government despite them having  a combined $120 billion in endowment funds.  There is no way they need the money.

Consider also how in the last week of the past fiscal year, $50 billion of federal contracting went out the door ($1 dollar out of every $9) because of “lose it or spend it.”  This was done to assure that their budgets will get the same appropriation, or even more, in the next year.

Scrutiny is also needed over federal grant making.  $600 billion goes out every year for grants which are really government subsidies and giveaways. For example:

The federal government has admitted to $1.4 trillion paid out since 2003 in mistaken or improper payments. That’s two full years of Department of Defense expenditures:

In closing, Adam referenced back to Dr. Coburn when he was wrapping up his time in the U.S. Senate.  As one who delivered 3,000 babies, sometimes there is only 3 minutes for a doctor to make the decision whether to save the life of a baby and the life of a mother.

Said Adam, we are now facing a three-minute America.  On fiscal issues we must start driving the car and telling our leaders how fast to go and when to stop.  This can be done by going to OpenTheBooks.com and downloading its free app to view spending.  Then ask questions, demand answers, and hold politicians accountable for their tax and spend decisions.

What You Need to Know is the Qatar-Europe NGO scandal continues! These global schemes with millions of dollars flowing through non-government … END_OF_DOCUMENT_TOKEN_TO_BE_REPLACED

As the midterm elections fast approach, Democrats have lost a key demographic that they relied on in 2020: college-educated men. The biggest … END_OF_DOCUMENT_TOKEN_TO_BE_REPLACED

The Deep State in Washington, D.C. just offered to debrief Trump Administration officials about the hot air balloons that have invaded our airspace … END_OF_DOCUMENT_TOKEN_TO_BE_REPLACED

What You Need to Know is Lies, Damned Lies, and Biden’s Border Statistics. The Narrative Machine’s media wing and the Biden Administration (including … END_OF_DOCUMENT_TOKEN_TO_BE_REPLACED

Phyllis Schlafly Eagles · February 8 | Leftist Hollywood's Downward Spiral Looking back on 2022, it is plain to see that Democrat-dominated … END_OF_DOCUMENT_TOKEN_TO_BE_REPLACED