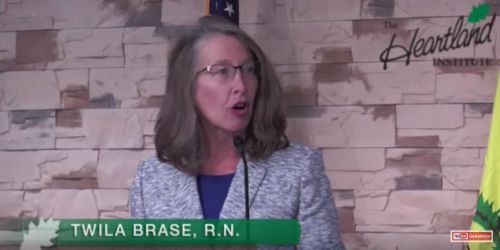 Twila Brase, RN, PHN, president and co-founder of the Citizens’ Council for Health Freedom (CCHF), was featured at Heartland Institute November 7th.  Twila was voted #75 on Modern Healthcare’s 2009 list of the “100 most Powerful People in Healthcare.”  Brase’s commentaries have appeared in CNS-news.org, the Star Tribune, The Hill, Townhall, the Wall Street Journal, and the Washington Times. Her article “Blame Congress for HMOs” has been reprinted in the Congressional Record of the U.S. House of Representatives.

Introduced by Jim Lakely, Communications Director at The Heartland Institute, Twila Brase addressed the very important topic of healthcare as set forth in her book, Big Brother in the Exam Room (The Dangerous Truth about Electronic Heath Records). Twila’s remarks were striking in content and elicited a cause for concern among attendees.

Below are Twila Brase’s own words about her book: (Order here Big Brother in the Exam Room)

“There are serious dangers lurking behind the government’s $30 billion electronic health record (ERH) experiment.  This omnipresent technology turns doctors into data clerks and shifts attention from patients to paperwork–while health plans, government agencies, and the health data industry profit.  HIPAA “privacy” rule protections of the confidentiality of their medical information will be shocked to discover it makes their medical records an open book. ”

Twila Brase spoke convincingly about surveillance and how it has always been a tool of control.  The Stasi in East Germany kept detailed files using IBM’s Hollerish machine.  Our Founding Fathers added the Bill of Rights to our Constitution to protect privacy, but with the emergence of the surveillance-enable technologies of today, our freedoms risk being taken away.

Intrusion into our lives began in the 1940’s when America’s third-party payee system began with employer-sponsored coverage, the first being Blue Cross and Blue Shield.  When Americans handed over their financial responsibility for medical bills to third party payers they gradually lost choices, privacy, control, and freedom.

The next big invasion into our privacy came in 2004, when Congress mandated the use of government-certified electronic health records (EHRs).  All public and private healthcare providers and other eligible professionals (EP) were required to adopt and demonstrate “meaningful use” of electronic medical records (EMR) by January 1, 2014 in order to maintain their existing Medicaid and Medicare reimbursement levels.   If doctors and hospitals refuse to install a government-certified HR (or refuse to demonstrate Meaningful Use), they will receive reduced Medicare payments.

Certification of CEHRT technology resulted in a system meant not to improve patient care, but to do what the government wants it to do, billing, reporting, and data analytics.  It’s like Big Brother in the examining room where patient information is collected through CEHRT technology which is linked to a national medical records system.

About HIPPA, the Health Insurance Portability and Accountability Act was enacted by the United States Congress and signed by President Bill Clinton in 1996.  It evolved out of Hillary Clinton’s Health Care plan.

Twila spoke at length about the HIPAA privacy rule and how the public has no idea that HIPAA, instead of protecting them, eviscerates them. Patients have no idea that the “patient portal” is government-mandated as part of Meaningful Use and used to capture patient-generated data. With billions of dollars now in the hands of third parties, privacy rights are being destroyed by third parties who claim they have the right to decide who gets the dollars and what the dollars pay for. They also decide how much of a patient’s medical record must be disclosed before they’ll agree to pay part of, all, or maybe none of  the patient’s medical bills.

The very last chapter of Twila’s book lists forty-one steps for Citizens and Patients to protect their privacy, safety, and freedom.  Eight are listed below:

Jim Lakely, Director of Communications at The Heartland Institute, opened the event, explaining to any newcomers present that Heartland was a 34-year-old nonprofit organization fighting for individual liberty and free markets, with an outreach program that works closely with state legislators.

As to the kinds of things Heartland does, Lakely noted Heartland’s four-part Climate Disruption Project:

In a brief discussion of the day after the midterm elections, Lakely called it a “mixed bag.” Nevertheless, Heartland, through educating voters, helped defeat the following ballot initiatives on energy policy:

What You Need to Know to Understand is the danger of the Narrative Machine! Read this article from Tablet Magazine to help understand the connection … END_OF_DOCUMENT_TOKEN_TO_BE_REPLACED

What You Need to Know is Distrust and Verify U.S. Intelligence. The same people who gave us the Russia Hoax (Trump colluding with Russia) and the … END_OF_DOCUMENT_TOKEN_TO_BE_REPLACED

What You Need to Know is the System is Rigged! When values and truths that once were held dear appear to be untrue and broken, then people are more … END_OF_DOCUMENT_TOKEN_TO_BE_REPLACED

“Big Weed” is the $33 billion-dollar marijuana industry that prefers to go by its euphemistic term cannabis. It is spending hundreds of millions of … END_OF_DOCUMENT_TOKEN_TO_BE_REPLACED