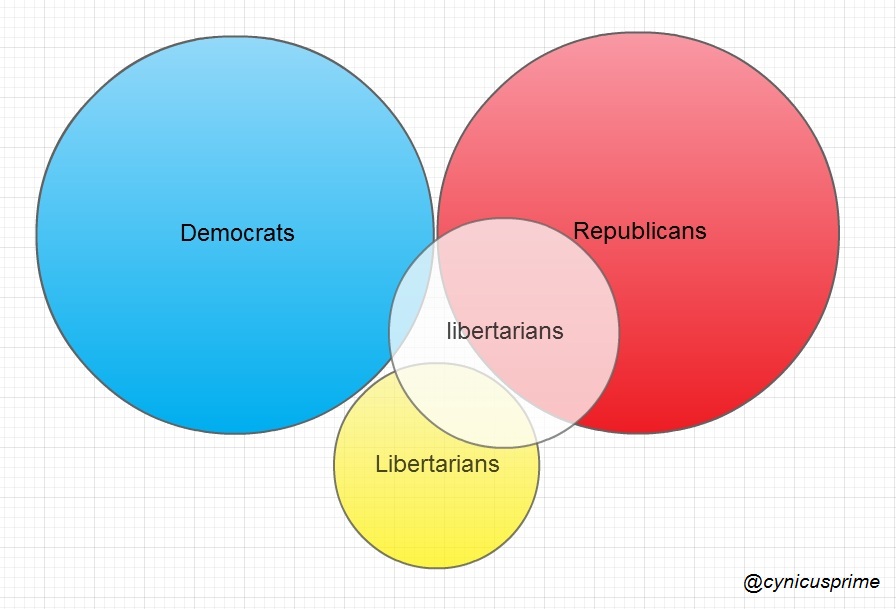 Phyllis Schlafly Eagles · February 23 | The Difference Between Republicans and Libertarians

The first difference I see is a philosophical one. Libertarians want to remove any sense of morality from our government. They support abortion because they do not want the government defining whether babies are alive They support not just marijuana, but all dangerous narcotics because they do not want the government telling people what to do. Libertarians take the small government mindset conservatives have, but they remove any kind of moral restraint from the equation.

The second difference I see between libertarians and conservative Republicans is a practical one. Libertarians who identify with the political party of the same name ignore the fundamental mechanics of how our elections were designed to operate. Under our Constitution’s winner-take-all system, third parties just aren’t viable. Working within the current two-party system is the only way to make real change in America. I encourage all libertarians to support the viable candidate who most closely aligns with your views. Don’t throw your support away carelessly.

All of us who want to reduce the size and reach of the federal government have a lot in common. We all want to stop government from controlling our lives. However, there are important distinctions between the libertarian and conservative Republican mindset. Don’t throw the baby out with the bathwater by endorsing an unworkable vision that calls for removing all sense of morality. Let’s work together with everyone where we agree, but conservatives should not give up on important issues like abortion, drug legalization, and marriage.

What You Need to Know about Biden’s woke SCOTUS pick. President Biden is choosing a Supreme Court judge based off of race and sex. While he’s trying … END_OF_DOCUMENT_TOKEN_TO_BE_REPLACED

What You Need to Know is AG of VA Jason Miyares is fearless! Conservatives too often have a problem where they think the goal is to win the election … END_OF_DOCUMENT_TOKEN_TO_BE_REPLACED

Phyllis Schlafly Eagles · January 25 | Fire Fauci “Fire Fauci” should be the campaign slogan for every Republican, because the policies pursued by … END_OF_DOCUMENT_TOKEN_TO_BE_REPLACED

What You Need To Know about Biden’s worst week as President. Andrea Kaye, guest host of the #ProAmericaReport, explains how this has been the worst … END_OF_DOCUMENT_TOKEN_TO_BE_REPLACED

What You Need To Know is the SCOTUS victory is overshadowed by how we got here in the first place. Guest Host Andrea Kaye breaks down the High Court’s … END_OF_DOCUMENT_TOKEN_TO_BE_REPLACED

If the education establishment wants to know why public schools don't get much respect from our citizenry, they need look no further … END_OF_DOCUMENT_TOKEN_TO_BE_REPLACED

Robert Strange McNamara belongs on the daytime soap operas. Better yet, his histrionics belong on Donahue or Geraldo or Sally Jesse Raphael. We are … END_OF_DOCUMENT_TOKEN_TO_BE_REPLACED