When a Clinton-backed group called the Million Moms March tried to use the gimmick of mothers distraught by children’s access to guns, the true voice of America’s mothers could not help but speak up. Cutting through the deception and misinformation of the Left, the June 2000 Phyllis Schlafly Report sets the record straight on one of the most politically divisive issues under the sun. More than just personal opinions and diatribes, the June 2000 PSR relies on the cold hard facts to overcome the emotionally charged rhetoric that reportedly brought tears to the eyes of President Bill Clinton. Considering his position on the gun issue, the facts in the Phyllis Schlafly Report arguably could have made him cry even more.

The media heavily covered the group arguing that a lack of gun control results in massive casualties from accidental discharges from children. However, the facts do not bear out their portrayal. Of gun violence among youth, the vast majority is perpetrated by older teenagers as a result of gang activity. Phyllis pointed to the Centers for Disease Control to bring some reality into the discussion. As it turns out, only twenty-one children under age fifteen died as a result of accidental discharges in 1996. While every life is certainly valuable, advocates who want to protect children would save many more lives by advocating that pools have fences around them. The facts prove that those on the Left are either ignorant of concrete evidence as presented by the CDC or, more likely, they have an agenda far more devious than protecting innocent children. Since the publication of the June 2000 Phyllis Schlafly Report, the CDC has come out with facts even more condemning for the gun control advocates. In the spirit of this important publication, let’s take a look at what a reputable organization not known for its political bias has to say on this issue where facts are hard to come by.

A landmark CDC study on this issue came about by an ironic twist of fate in 2013. President Obama signed an executive order telling the CDC to study gun violence. His reasoning was that “Year after year, those who oppose even modest gun-safety measures have threatened to defund scientific or medical research into the causes of gun violence, I will direct the Centers for Disease Control to go ahead and study the best ways to reduce it.” Unfortunately for him, that plan backfired (pun intended.) As it turns out, a lot of the so-called “facts” being touted by the gun control lobby are completely false.

One of their most ubiquitous claims is that guns are rarely used for self-defense. The CDC report clearly stated that “Almost all national survey estimates indicate that defensive gun uses by victims are at least as common as offensive uses by criminals, with estimates of annual uses ranging from about 500,000 to more than 3 million per year . . . in the context of about 300,000 violent crimes involving firearms in 2008.” You can bet that President Obama was not expecting that when he ordered the study. Phyllis, however, was expecting just that. The June 2000 Phyllis Schlafly Report said, “Crime is reduced by putting guns in the hands of law-abiding citizens. Guns are the safest and most effective means of resisting violent criminal attack.” In yet another classic example of Phyllis Schlafly being ahead of her time, the June 2000 PSR got the facts right from the beginning.

The Million Moms March which headlined the June 2000 PSR faded quickly. Though it had thousands of participants in its first year, it had only two hundred participants in the second year and it disappeared altogether by the next year. Clearly, facts can prevail against emotional disinformation. Yet, the gun debate remains one of the oldest and most contentious in history. After hundreds of years of debate over who has the right to bear arms and under what circumstances, the importance of this issue has not faded. The PSR said “Gun confiscation leads to a loss of freedom, increased crime, and the government moving to the left.” Of course, confiscation is the natural progression of excessive regulation. If we are to defend our right to bear arms from the emotional disinformation of the Left, we must do the research and compile the facts that rise above the entrenched and misleading narrative. This tactic was successfully used in the June 2000 Phyllis Schlafly Report and the research has only proven more favorable since then. It is up to us to do the work necessary to make the difference.

To view the June 2000 Phyllis Schlafly Report in its entirety, please click on the image below. 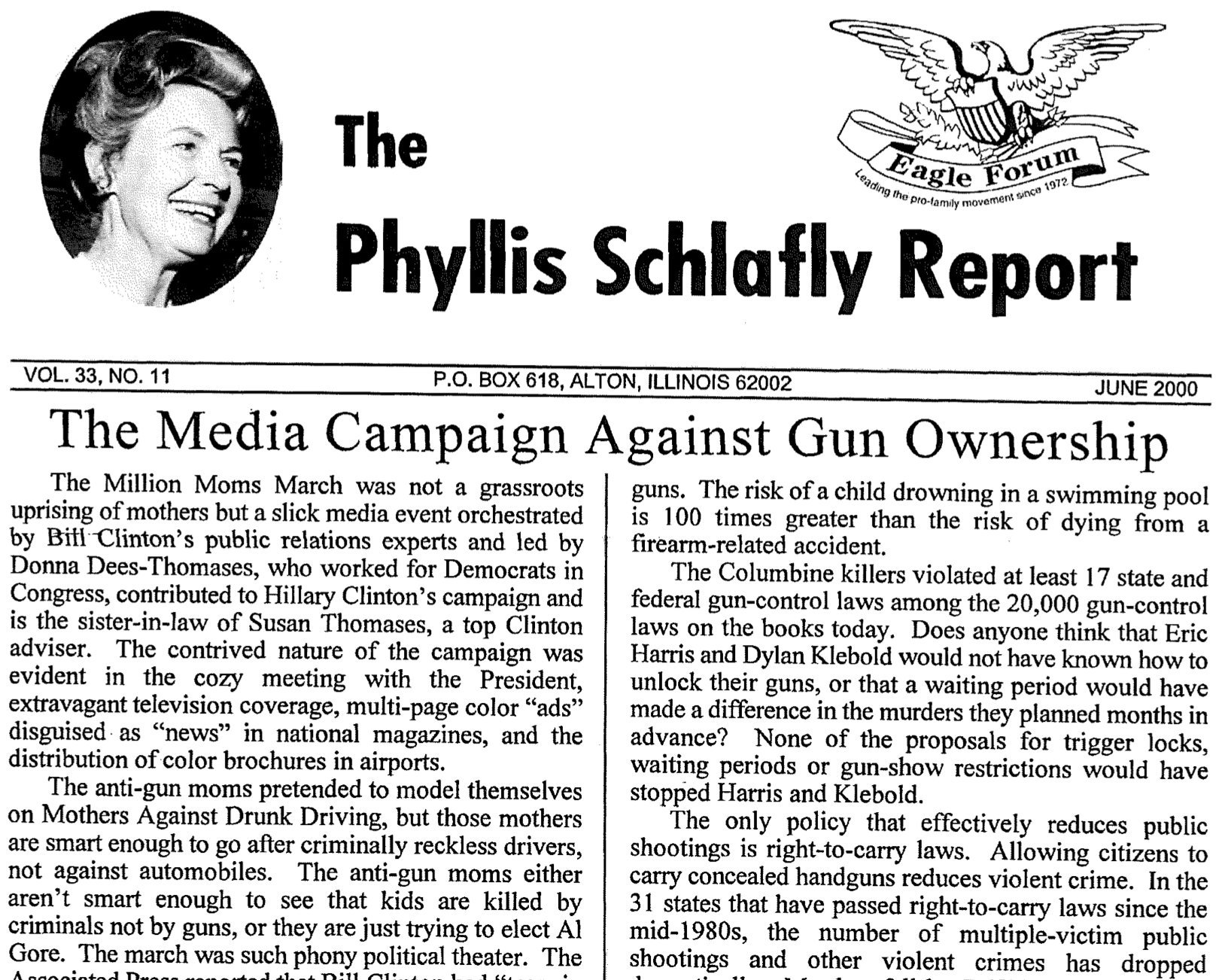 Phyllis Schlafly Eagles · #WYNK: How America is Winning and Losing | June 29, 2022 #ProAmericaReport The following is a transcript from the Pro … END_OF_DOCUMENT_TOKEN_TO_BE_REPLACED

Phyllis Schlafly Eagles · July 6 | Will Globalists Build the Future? Amid chaos on many fronts, globalists march forward into the night. Klaus … END_OF_DOCUMENT_TOKEN_TO_BE_REPLACED

“This is about the future of the liberal world order and we have to stand firm,” declared Biden Administration official Brian Deese. “Liberal world … END_OF_DOCUMENT_TOKEN_TO_BE_REPLACED