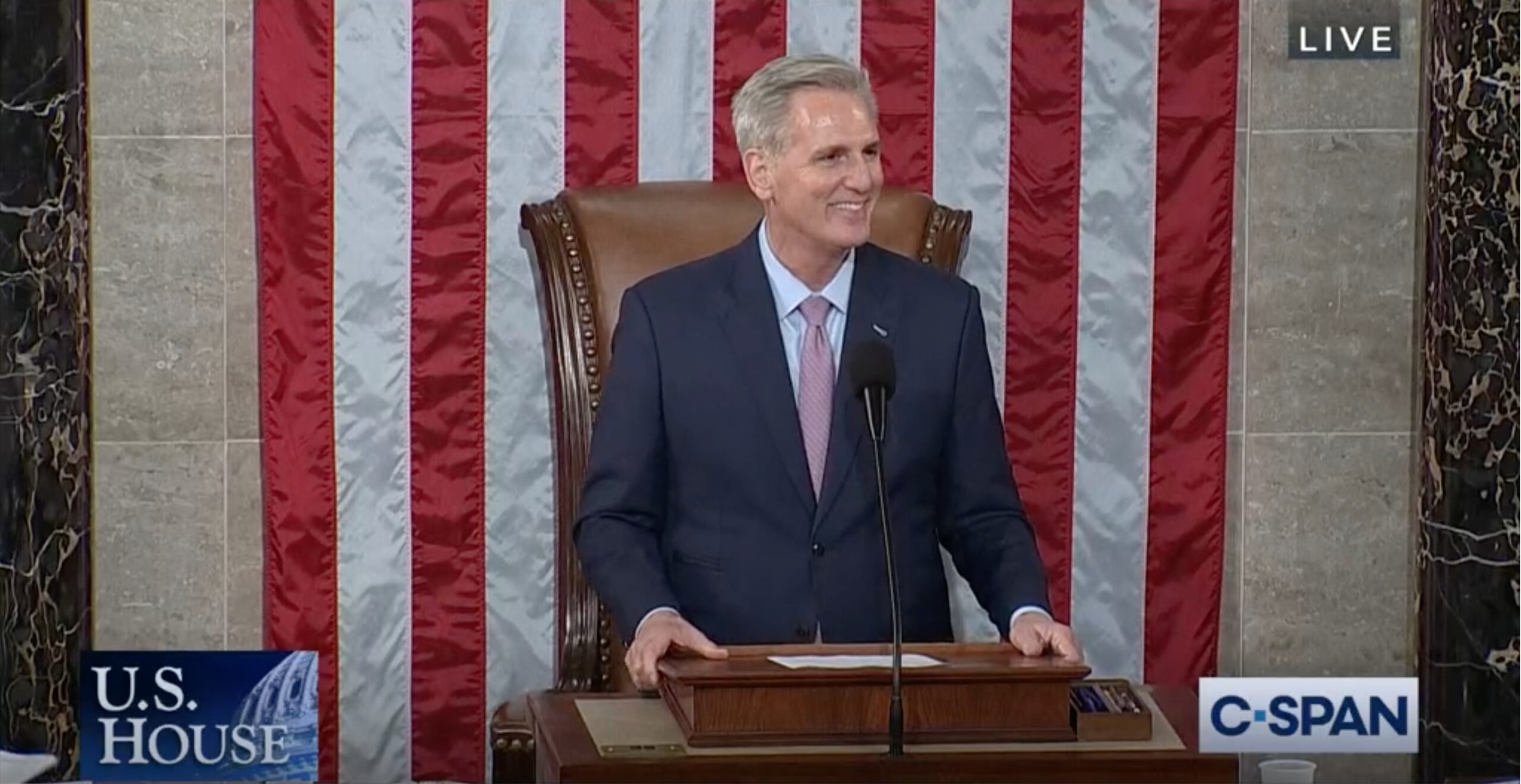 Conservatives asserted themselves in the election for Speaker of the House and, now that Kevin McCarthy has been picked, action is needed to shut down weaponized prosecutions. Our Republic is imperiled by improper attempts to prosecute Republican leaders.

In the last act of the Democrat-controlled Congress before handing the gavel to McCarthy, Democrat minority leader Hakeem Jeffries reduced the chamber to groans with his Mickey Mouse-style recitation of 26 couplets, one for each letter of the alphabet. For the letter G he shouted “governance over gaslighting.”

Governance over gaslighting, indeed, will be the method of the new Republican House. In becoming next in line to the presidency after our hapless vice president, McCarthy pledged to form and fund a new subcommittee to expose and stop the weaponization of the FBI and other government agencies against the president’s chief political rival, Donald Trump.

Headlines are filled with leaked news from liberal-controlled investigations that should not even exist. The Democrat-controlled Fulton County, Georgia grand jury completed its secret report that may recommend indictments of top Republicans, and the Justice Department issued subpoenas on Republican officials over two-year-old conversations with Trump.

On Monday, conservatives flexed their muscle in the House by electing a young Trump-supporting congressman from rural Missouri, Jason Smith, as chairman of the powerful Ways and Means Committee. Smith was a late entry in that race and yet overcame the less conservative, older Rep. Vern Buchanan (R-FL) on the second ballot.

Meanwhile, the new Chairman of the House Judiciary Committee is Rep. Jim Jordan (R-OH), the two-time winner of the NCAA Division I wrestling championship when he was in college. He also won his state wrestling championship all four years in high school, and at one point defeated a future Olympic gold medalist.

As Chairman, Jordan should perform the equivalent of the “Fireman’s Carry” takedown, a wrestling move that uses an opponent’s aggression against him. He can issue subpoenas against the unhinged investigators who interfere with Trump’s ongoing reelection campaign to return to the White House, with a penalty of contempt for liberals who refuse to comply.

Presidential elections need to be protected by Congress against political hacks who disguise themselves as prosecutors. Our Republic and its democratic processes should not be thwarted by low-level county prosecutors or unaccountable Deep State operatives who seek to change the course of American history by making unprecedented allegations of non-existent crimes.

We learned Monday night that the Penn Biden Center, a so-called think tank funded by donations from China, improperly possessed classified documents from Biden’s time as Vice President more than six years ago. Yet there is no million-dollar investigation of Biden, while biased prosecutors have relentlessly harassed Trump and even raided his home over documents that he had securely locked and protected.

The Republican House should crack wide open the one-sided investigations of Trump at every level, while similar conduct by top Democrats has gotten a pass. Our Nation depends on free and fair elections and that cannot be achieved if biased prosecutors do the bidding of Democrats trying to block Trump’s reelection.

While Republicans do not have a majority in the U.S. Senate, they do not need one to shine a bright spotlight on the misuse of government by Dems against Trump and his many supporters. The House should rescind its own contempt resolutions against good folks like Steve Bannon and Peter Navarro, for their non-existent “crimes” of protecting President Trump.

The House should pass resolutions to pardon individuals who have been improperly convicted, or imprisoned without a trial in the D.C. Gulag where they are deprived of medical treatment. Such legislative pardons are untested in courts but could be attached to pet projects that Biden and other Democrats demand the House to enact for their special interests.

The House can subpoena and compel testimony, and should do so immediately. The House controls the purse strings for all of the federal government, and if Democrats refuse to cooperate then Republicans should be prepared to cut off the funding of D.C. and other liberal enclaves.

The officials in Fulton County, Georgia, who have interrogated Sen. Lindsey Graham (R-SC) and many Trump allies should receive subpoenas soon from the House Judiciary Committee, to answer questions about why they are interfering with the 2024 presidential election. Protecting the integrity of that upcoming election against scurrilous accusations by rogue prosecutors is central to the House’s authority, and it has jurisdiction to pursue this.

Questions should include what precedent prosecutors can cite for misusing their power to interfere with the reelection campaign of the presumptive Republican nominee. If Georgia county officials refuse to show up and testify, then they should be held in contempt of Congress as Democrats were so fond of doing to Republicans over the last two years.

What You Need to Know is a lesson on documents and double standards. Suddenly everyone has classified documents and everyone is spinning the stories … END_OF_DOCUMENT_TOKEN_TO_BE_REPLACED

Phyllis Schlafly Eagles · #WYNK: Documents and Double Standards | January 24, 2023 #ProAmericaReport The following is a transcript from the Pro … END_OF_DOCUMENT_TOKEN_TO_BE_REPLACED

What You Need to Know is that about political hit jobs against lawyers. Conservative lawyers who stand up for truth and transparency are being … END_OF_DOCUMENT_TOKEN_TO_BE_REPLACED

For Immediate Release: January 26, 2022Contact: Ryan Hite, Communications Director Solution Staring Us In the Face to Save American Lives: Shut the … END_OF_DOCUMENT_TOKEN_TO_BE_REPLACED

What You Need to Know is we are in a proxy war with Russia. Until now, we’ve been able to at least try to say we have given Ukraine defense weapons … END_OF_DOCUMENT_TOKEN_TO_BE_REPLACED