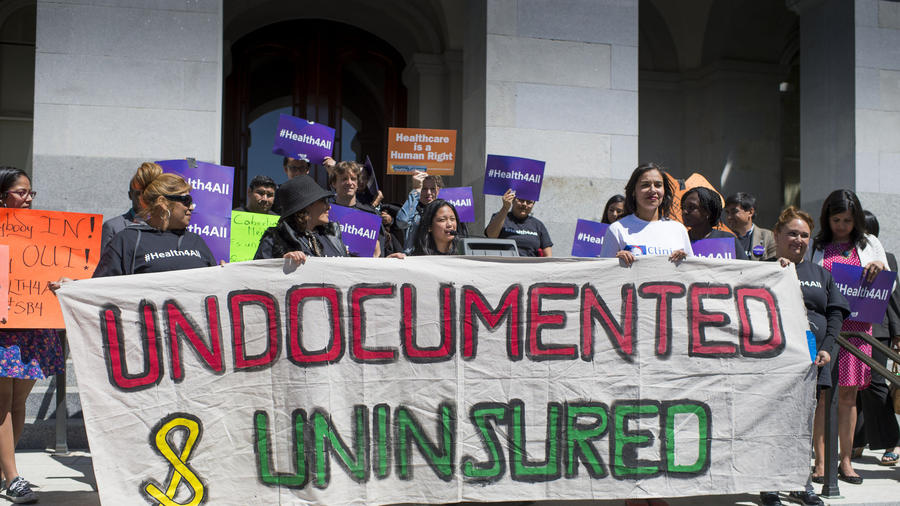 The rush to the Left by Democratic presidential candidates in an attempt to win its nomination has resulted in a call for Medicare for All.  Nearly every Democratic candidate has endorsed the inclusion of illegal aliens in this or similar government-run healthcare programs.

Medicare for All would be a fiscal disaster, whether it includes illegal aliens or not.  Elizabeth Warren first drove this train past her rivals in the polls, but it has become a train wreck as her liberal rivals question it.

Warren rose to the status of the presumptive nominee in early October as she surged to a tie with Joe Biden nationwide, and surpassed him in early states like Iowa.  Then came the presidential debate on October 15, where Biden and Pete Buttigieg criticized her on stage for the lack of details in her proposal.

Since then Warren’s national support has dropped in half, down to only 14% among Democratic voters.  Her support in Iowa has plummeted too, falling by 6% to only 16%.

Warren’s unexpected decline correlates with her full-throttled endorsement of Medicare for All, for which she has released details after being criticized.  At a town hall on November 8, Warren confirmed that her proposal would include Medicare for all illegal aliens, too.

“Medicare for All, as I put this together, covers everyone, regardless of immigration status, and that’s it,” Warren declared there in response to a question.  The local audience applauded her, but the reception nationwide to her plan has been chilly, even among likely Democrat primary voters. 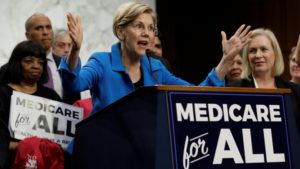 Her plan would cost $52 trillion, not just billion, over ten years.  She is competing with Bernie Sanders, who also supports free medical care for illegal aliens and even a moratorium on deportations.

Her plan would cost $52 trillion, not just billion, over ten years.  She is competing with Bernie Sanders, who also supports free medical care for illegal aliens and even a moratorium on deportations.

The reality is that anyone, whether lawfully in the United States or not, can already show up at any emergency room in a hospital and receive free medical care.  This has been true ever since Congress passed the Emergency Medical Treatment and Labor Act of 1986 (EMTALA), which has contributed to hospital bankruptcies ever since.

Many illegal aliens have crossed our borders in order to show up at emergency rooms and give birth here in the United States, so that their child could claim American citizenship and thereby provide a basis for relatives to migrate here also.  Known as “anchor babies,” they lack a constitutional right to citizenship but their relatives then demand entitlements.

The Democrats’ approach is the opposite of President Trump’s, who continues to work hard to reduce the enormous drag on the budget caused by people who are in the United States illegally.  On August 12, Trump announced his new rule that green cards will not be issued to immigrants who are likely to become dependent on government aid.

For example, government health care and housing have not been criteria for excluding an illegal alien because he is likely to become a public charge, and a drain on our budget.  This omission meant that illegals and green card applicants could be milking Medicaid and free housing without scrutiny by an immigration official considering whether to allow them to stay.

New York, despite benefiting from a booming stock market on Wall Street, just announced that it expects a massive operating deficit of $6.1 billion, its largest since the Great Recession more than a decade ago.  The cause is the hemorrhaging of dollars in its Medicaid program, a state program intended to pay health care costs for the poor.

New York is a magnet for illegal immigration whom its Democratic leadership has welcomed.  It sends to Congress politicians who endorse Bernie Sanders, such as Rep. Alexandria Ocasio-Cortez (D-NY), better known as “AOC.”

Despite Trump’s valiant effort to reduce the issuance of green cards if the recipients are likely to become a public charge, in early October Democrat-appointed judges in three different blue states each independently blocked enforcement of Trump’s new rule.  Two of these judges were appointed by Clinton, and a third by Obama.

Trump also properly attempted to suspend the entry into our country of immigrants who are likely to burden the healthcare system.  Entitled Proclamation 9945, this would help preserve our scarce medical care dollars for Americans rather than foreigners.

But on November 26, an Obama-appointed judge overturned Trump Proclamation 9945.  Judicial supremacy continues to block sensible orders by Trump which would protect our nation against the suffocating financial burdens caused by illegal immigration.

What You Need to Know is elections have consequences! The Biden Administration has dismantled a large commission in the State Department that focused … END_OF_DOCUMENT_TOKEN_TO_BE_REPLACED

What You Need to Know is beware of the vaccine bullies! Science is good and there are good vaccines out there. However, we have a lot of vaccines in … END_OF_DOCUMENT_TOKEN_TO_BE_REPLACED

What You Need to Know is the Narrative Machine’s “January 6 Insurrection” story is falling apart. They crafted a fantasy that the MAGA rally was … END_OF_DOCUMENT_TOKEN_TO_BE_REPLACED

What You Need to Know is two good reasons to pass election reform: 1) If fraud is found and addressed; 2) When voter confidence is low. We have a … END_OF_DOCUMENT_TOKEN_TO_BE_REPLACED

What You Need to Know is people want to know their vote counts! Georgia recently passed a law that would help bring back confidence in elections for … END_OF_DOCUMENT_TOKEN_TO_BE_REPLACED

Phyllis Schlafly Eagles · February 22 | Is Virtual Learning the Solution? Is anyone really surprised that so-called “virtual learning” is a whole … END_OF_DOCUMENT_TOKEN_TO_BE_REPLACED

What You Need to Know is Biden is a racist President! Politico gives you a sense of what the left is pushing. Here’s a recent article from Politico … END_OF_DOCUMENT_TOKEN_TO_BE_REPLACED