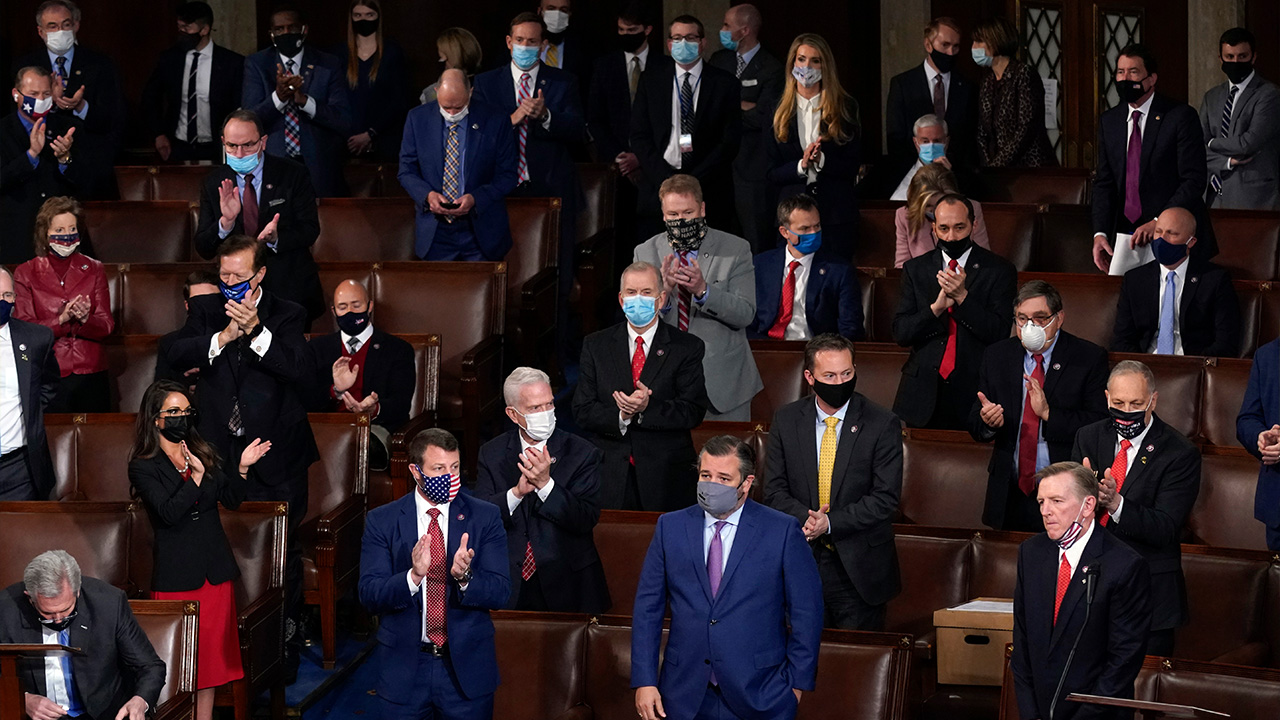 While House Democrats improperly invoke the 25th Amendment to try to remove President Trump, House Republicans should be using the 12th Amendment to give him four more years. Last week 138 Representatives from 35 states voted in favor of Trump by objecting to the fraudulent Biden electors from Pennsylvania.

The significance of that vote in the wee hours last Thursday morning is that more than 2/3rds of the states, which is the quorum required by the 12th Amendment, objected to a central part of the election certification. That was after the electoral count was interrupted by the misnamed “insurrection,” so it is clear that the protests did not weaken GOP objections to Biden.

Senators reneged on their promise to object to the Biden electors from Georgia and elsewhere, but senators have no role under the 12th Amendment to interfere with this process. They relied on the disputed Electoral Count Act of 1887, which even liberal scholars have condemned as unconstitutional.

The various senators who sanctimoniously speak out against Trump now have no constitutional authority to pick the next president, or certify electors. The 12th Amendment is clear: the House of Representatives, convening by state delegation, is required to pick the next president when no candidate has a legitimate majority of the Electoral College.

The same 138 Republicans who properly objected to certifying Biden electors could still meet under the Constitution to rectify the election of the next president. While Pelosi and Democrats are grasping for other provisions of the Constitution to try to destroy the Republican Party in the waning days of Trump’s first term, the 27-20 GOP majority by state delegation could re-elect him.

More Republicans would likely join the 138. The Republican states of North and South Dakota oddly failed to object to Biden’s electors from Pennsylvania, but they surely would not vote for Biden in a special session to elect the next president.

In politics, as in sports, the best defense is a good offense. When the other side attempts a full-court press in basketball, coaches know that the optimal response is a stepped-up offense to break down the press.

For nearly a week Democrats have misled the public and exploited the improper removal of Trump from Twitter. Liberal Politico ran a headline screaming “Second U.S. Capitol Police officer dies,” although that off-duty death had nothing to do with the protests last Wednesday.

Leftists have taken over the narrative of the rally at the Capitol last Wednesday and completely misrepresented what Trump said, and what his supporters did. Far from the liberal portrayal of a “riot,” which has a goal of stealing, vandalizing, and injuring, the unarmed protesters were akin to anti-Vietnam War protests of the 1960s, and many similar ones ever since.

When four protesters were shot and killed at Kent State University in 1970, it was considered a national calamity. But the killing at the Capitol of the unarmed pro-Trump 14-year Air Force veteran Ashli Babbitt, who had honorably served our country during four tours in Iraq and Afghanistan, is barely mentioned by liberals.

Pelosi and her minions are furious at how they were humiliated by the unarmed protesters. The scenes of rowdy folks occupying the Speaker’s chair and wielding her podium were reminiscent of the comic book character the Joker, who liked to ridicule the powers-that-be, as Jack Nicholson did in an art museum scene from the 1989 Batman movie.

Satire and mockery are not crimes, even when the target is Congress. Sit-ins which occupy legislators’ offices have long been a staple of political protests, for which punishment was little or nothing in recognition of the protesters’ First Amendment rights.

Yet Democrats are charging hard with a vengeance against Trump, anyone who supports him, and the entire Republican Party. The Lincoln Project, a virulently anti-Trump group, is setting up a database to identify people who worked in the Trump Administration, to subject them to retaliation.

Phyllis Schlafly once observed that it is impossible to achieve anything good in politics without leadership. Trump gave us that leadership for four years, and the last few days without him on Twitter have shown how dire the future would be without him.

The Founding Fathers gave America the means in the original Constitution and the 12th Amendment ratified in 1804 to right an election gone wrong. The Supreme Court has demonstrated that it does not want to intervene, so the House should convene by state delegation and exercise its full authority.

What You Need to Know is about the ethics of power, not the ethics of truth. That's the political situation we are facing! The left pursues power no … END_OF_DOCUMENT_TOKEN_TO_BE_REPLACED

What You Need to Know is Democrats’ plan to slow down GOP investigations. David Brock (of Media Matters) released a memo detailing a group that will … END_OF_DOCUMENT_TOKEN_TO_BE_REPLACED

What You Need to Know is why Trump is not an echo of other candidates before him. Phyllis Schlafly famously first used that phrase — a choice, … END_OF_DOCUMENT_TOKEN_TO_BE_REPLACED

Phyllis Schlafly Eagles · December 9 | Are Supporters of America First Scrooges? It’s going to be a long, cold winter in the United States, but … END_OF_DOCUMENT_TOKEN_TO_BE_REPLACED

What You Need to Know is how lame the Lame Duck session is. For all of November and December, there are several dangerous public officer holders who … END_OF_DOCUMENT_TOKEN_TO_BE_REPLACED