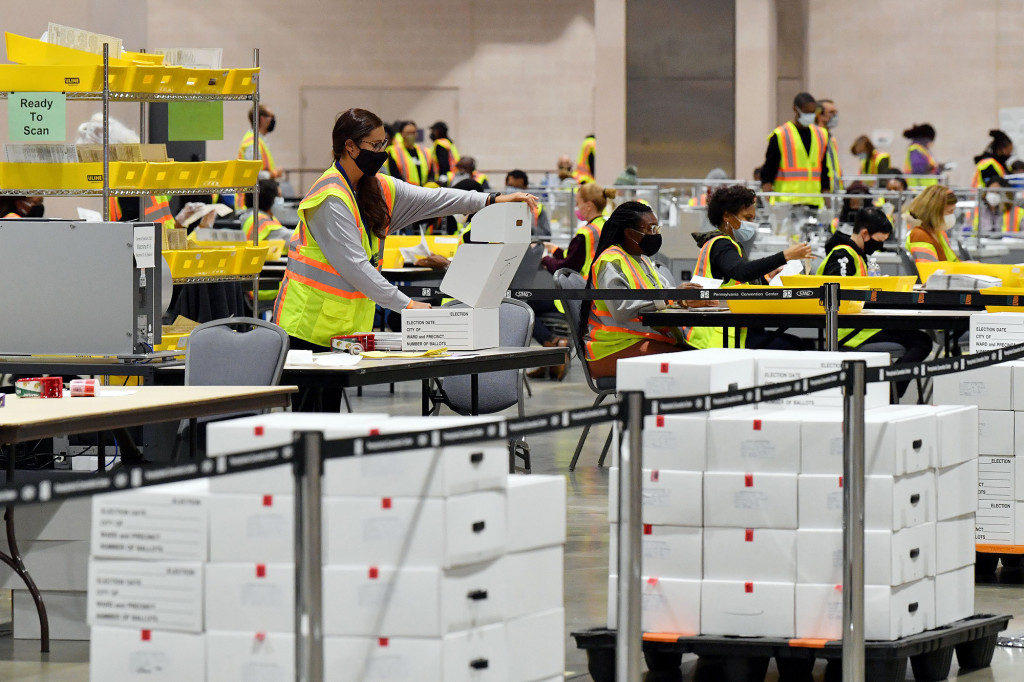 President Trump should reject the liberal clamor to concede an election that was evidently stolen by hundreds of thousands of fake ballots in seven battleground states. Ballots from voters who never requested them, along with ballots not completely filled out and personally returned with signatures that were both witnessed and verified, have turned this election into an unverifiable farce.

The United States Code (Title 3, Section 1) requires that the “electors of President and Vice President shall be appointed, in each State, on the Tuesday next after the first Monday in November.” That means only one day for every state to conduct a nationwide election, not many weeks of collecting ballots by political partisans.

Joe Biden and Kamala Harris should disavow the many improper ballots tallied for them long after Election Day. Biden and Harris should concede the illegality of ballot harvesting, whereby paid operatives stuff the ballot box with thousands of ballots in the names of people who never earnestly voted with the necessary protections of an in-person secret ballot.

Many lawsuits are pending, even as new instances of voter fraud are still being uncovered. In Michigan, a software “glitch” flipped many votes improperly to Biden, and in other states poll watchers were improperly denied access to monitor the counting.

Never before in American history have the media rushed to declare a president-elect while the votes were still being counted, unless the opposing candidate had conceded defeat. In past elections, the media would only say that a candidate was “projected” to win, not that he actually won.

In 2000, for example, the media did not declare Bush the president-elect while the votes in Florida were still being disputed and recounted. Not until December 13, some 37 days after the election, did CNN report that “Texas Gov. George W. Bush donned the mantle of president-elect following Vice President Al Gore’s concession.”

It was only fitting that Biden and Harris covered their faces with masks as they claimed victory based merely on projections by their supporters in the media. Even some foreign leaders have greater respect for our Constitution than Biden supporters do, and have properly declined to congratulate him.

The Constitution provides that each state’s presidential electors shall be appointed “in such Manner as the Legislature thereof may direct.” Since the election rules were flagrantly disobeyed in key states including Pennsylvania, their state legislatures must reclaim their authority to appoint electors for the upcoming meeting of the Electoral College.

Contrary to the media drumbeat, the president-elect is the person who receives a majority of the Electoral College, or 270 out of 538 electoral votes. But the electors will not cast their votes until December 14, and we won’t even know who they are until each state completes the process of counting, recounting, canvassing, and certifying the election results in that state.

In addition, there are serious disputes about many ballots that have already been counted. In Pennsylvania, for example, hundreds of thousands of mail-in ballots were allegedly counted by Democrats outside the view of Republican poll watchers, in violation of the law.

President Trump is absolutely right not to concede, and he should not concede so long as votes are being counted and there remain legitimate questions about the integrity of the process. More than 71 million Americans voted for Trump last week – an astounding total which far exceeds that of any other president in history.

When the Communists stole the world championship from the United States Olympic men’s basketball team in 1972, the American team refused to concede defeat by accepting the silver medal instead of the gold. Forty years later, the American team captain even included a provision in his will that prohibits his heirs from ever accepting that silver medal, which remains unclaimed to this day at IOC headquarters in Switzerland.

That was not poor sportsmanship. It was a courageous and principled rejection of what was wrong, by withstanding pressure to go along to get along.

Trump’s detractors still fear him, and want him to concede now so that they can use his concession to discredit his presidency and undermine everything he might say or do in the future. They want Trump to legitimize this corrupt election process, so they can do more of it.

Trump should not concede to the calculated corruption by those who pulled every trick imaginable to stuff the ballot box and change the outcome of the in-person voting. The hundreds of thousands of mailed-in ballots that supposedly went 80-100% for Biden were no better than fake news.

The Biden-Harris campaign, with consummate arrogance, is trying to begin the so-called transition before this election has even been determined.  As Secretary of State Mike Pompeo told reporters today, “There will be a smooth transition to a second Trump administration.”

Proving once again that he is in touch with ordinary Americans, Donald Trump selected education for the first video message of his 2024 presidential … END_OF_DOCUMENT_TOKEN_TO_BE_REPLACED

Phyllis Schlafly Eagles · #WYNK: Trump's Record is Baked In | January 30, 2023 #ProAmericaReport The following is a transcript from the Pro … END_OF_DOCUMENT_TOKEN_TO_BE_REPLACED

What You Need to Know is Trump’s record is baked in. He’s already been torn apart every which way and his record stands with all the things you like … END_OF_DOCUMENT_TOKEN_TO_BE_REPLACED

Phyllis Schlafly Eagles · February 3 | "Woman" Is the Word of the Year The internet is a powerful tool that most of us use every day. … END_OF_DOCUMENT_TOKEN_TO_BE_REPLACED

What You Need to Know is Tucker is allowing the will of the people to be heard! When a huge block of Republicans and so-called conservatives are … END_OF_DOCUMENT_TOKEN_TO_BE_REPLACED