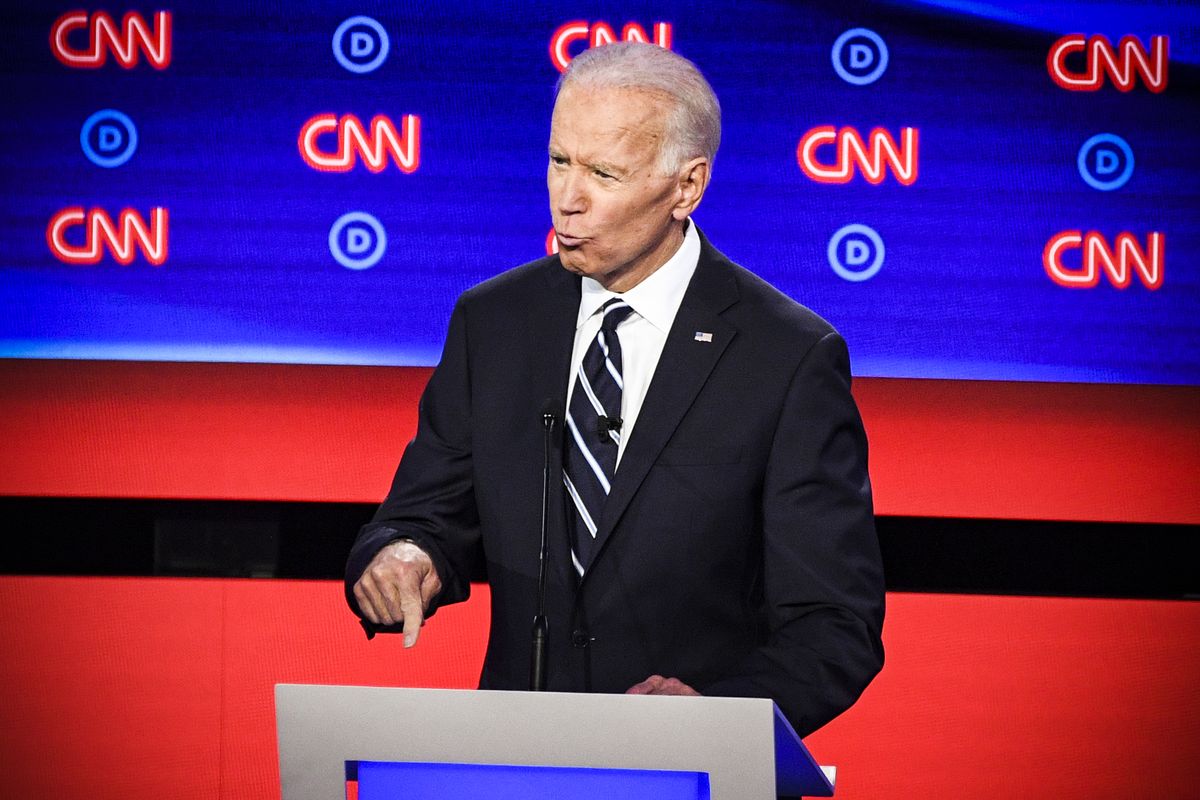 At CNN’s Democratic debate on Sunday night, even the moderators were stunned when Joe Biden, out of the blue, pledged to pick a woman as his running mate.  It was a calculated move designed to put President Trump in a box, while embarrassing Bernie Sanders for his reluctance to do likewise.

Biden is vulnerable with women voters, with videos documenting his groping of women and girls.  But his female running mate will try to deflect this issue by going on the offensive, as Senators Kamala Harris, Elizabeth Warren, and Amy Klobuchar proved they are capable of doing.

Biden hopes to make gender a top issue in the presidential race this fall, even more so than last time.  In addition to picking a woman for vice president, Biden also promised to appoint “the first black woman” to the Supreme Court.

Upcoming High Court rulings on three major gender-related issues no doubt influenced Biden’s strategy to play the gender card.  Each case could yield a 5-4 decision that will drop like a bombshell in the presidential campaign.

In one case, the Court will decide whether states can require abortionists to comply with basic standards requiring them to be available for follow-up on their complications.  Oral argument two weeks ago did not go as well as feminists hoped, and a divided ruling could inject abortion into the fall presidential debates.

In another case, the Court will decide whether the federal law that bans discrimination “on account of sex” should also prohibit discrimination on account of sexual preference.  In a third case, the Court will decide if “sex” means biological sex, as everyone thought it did when Congress passed the law, or whether sex now includes gender expression or transition to the opposite sex.

No matter how the Court rules in these cases, Joe Biden will use them to invoke feminist theories about gender.  But misusing the courts to change the meaning of our written law is the essence of judicial activism, which Republicans rightly oppose.

Biden may even toss in his support for the failed Equal Rights Amendment (ERA), which also contains the loaded phrase “on account of sex.”  A president has no role in amending the Constitution, but ERA was the final point of contention between Ronald Reagan and Jimmy Carter during their only debate in 1980.

Reagan was fully prepared to address this issue, and defended his opposition to ERA well.  Rather than amend the Constitution, Reagan said, ERA supporters could have worked on revising any discriminatory laws.

In fact, ERA would invalidate the Violence Against Women Act which Joe Biden brags that he wrote and passed in 1994.  Gender distinctions would not be allowed in any federal or state law if ERA were to become part of the Constitution, as Biden seeks.

In 2000 the Supreme Court invalidated as unconstitutional Biden’s handiwork in trying to extend federal jurisdiction, in United States v. Morrison.  But ERA would vastly expand federal mischief over gender.

Biden himself was the vice president for eight years, and before that he was in the U.S. Senate for decades.  While there he cast many votes which are totally out of sync with today’s progressive Democratic party, not to mention the populist coalition that elected President Trump.

Joe Biden presided over the Clarence Thomas hearings, and it was Biden himself who voted to send the nomination to the floor of the Senate without a recommendation.  Justice Thomas has served with distinction for nearly three decades ever since, yet Biden has never apologized for allowing that proceeding to become a “high-tech lynching” as Thomas accurately described it.

Biden’s reputation as a moderate is undeserved, and can be easily debunked after he gets the Democratic nomination.  He supports sanctuary cities and opposes President Trump’s policy of deporting criminal aliens, which would prevent many of the horrific crimes by illegal aliens against women and girls.

Among numerous other examples, Trump or his running mate could cite the brutal kidnapping, rape, and murder of a 16-year-old girl in Texas by an illegal alien, Humberto Leal Garcia.  Garcia was tried and sentenced to death, but the Obama Administration, with Biden as Vice President, attempted to intervene for Garcia.

Justice was then delayed for 17 years as the Obama-Biden Administration tried to prevent the execution of the illegal alien Garcia for brutally raping and killing the young girl.  Her nude body was found next to a massive rock used to smash her face to death, and a stick protruded from her dead body.

Garcia denied his guilt until he was strapped to the gurney in a Texas death chamber, after the state ultimately overcame the obstruction by the Obama-Biden Administration.  The illegal alien Garcia then admitted his guilt and apologized, a minute before he was justly given the lethal injection.

Phyllis Schlafly Eagles · February 3 | "Woman" Is the Word of the Year The internet is a powerful tool that most of us use every day. … END_OF_DOCUMENT_TOKEN_TO_BE_REPLACED

Phyllis Schlafly Eagles · #WYNK: Pro-Life Movement Has to Adjust | January 19, 2023 #ProAmericaReport The following is a transcript from the Pro … END_OF_DOCUMENT_TOKEN_TO_BE_REPLACED

Phyllis Schlafly Eagles · #WYNK: Political Hit Jobs Against Lawyers | January 18, 2022 #ProAmericaReport The following is a transcript from the Pro … END_OF_DOCUMENT_TOKEN_TO_BE_REPLACED

What You Need to Know is the House GOP Must Exercise Power of the Purse. We’re back to following the money this week, this time in Congress! House … END_OF_DOCUMENT_TOKEN_TO_BE_REPLACED

What You Need to Know is about classified documents and presidential power! Joe Biden’s unmasking may be coming, thanks to the GOP House. The DOJ has … END_OF_DOCUMENT_TOKEN_TO_BE_REPLACED

What You Need to Know is Fauci retires from the Covid Industrial Complex! He’s sneaking out under the cover of Thanksgiving and a no-news week. He … END_OF_DOCUMENT_TOKEN_TO_BE_REPLACED

What You Need to Know is Tucker is allowing the will of the people to be heard! When a huge block of Republicans and so-called conservatives are … END_OF_DOCUMENT_TOKEN_TO_BE_REPLACED