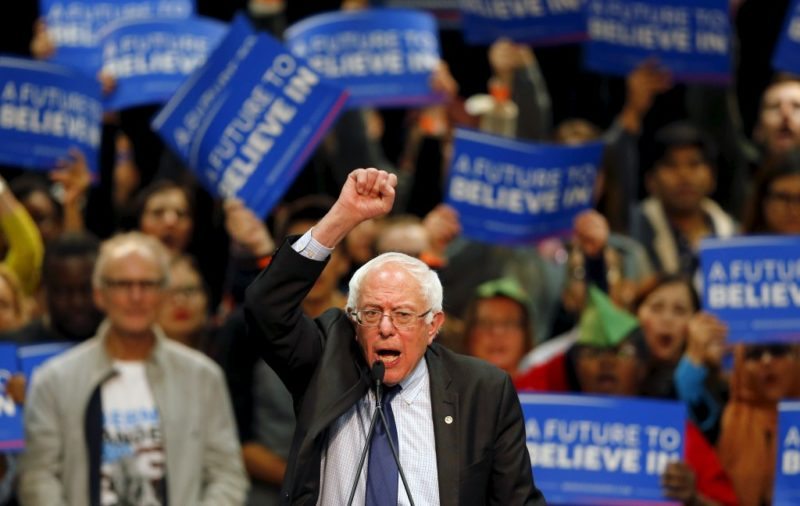 “Crazy Bernie,” President Trump calls the 78-year-old junior senator from tiny Vermont, and the nickname does not describe a harmless oddball.  Senator Sanders’ success has frightened the financial kingmakers in the Democratic party.

When Bernie refused to apologize for praising the communist dictators of Cuba, Venezuela and Nicaragua, Democratic insiders got alarmed at the prospect of losing Florida, home to thousands of refugees from those countries.  Since Bernie won by a landslide in Nevada, full panic has set in.

Two high-profile Democrat contenders pulled out within hours of each other after the South Carolina primary, to endorse Bernie’s rival, Joe Biden.  That was not a mere coincidence, but the result of an apparent behind-the-scenes effort to stop Bernie from obtaining the nomination.

“Quid pro quo!” Trump bellowed at a rally in North Carolina in response.  Rather than investigate non-existent collusion by Russia for Trump, someone should investigate what may have been promised to the other contenders to abruptly withdraw and endorse Biden.

But millions had already voted early, prior to this sudden transformation of the Democrat primary into a two-man race between Bernie and Biden.  This may be too little, too late by the Democrat Establishment to derail Bernie’s candidacy as he attracts crowds surpassed only by Trump himself.

On Sunday Bernie drew audiences totaling 25,000 in California, which is rich in delegates and young voters who are enthusiastic about Bernie’s quasi-revolutionary message.  In the state having an enormous gap between rich and poor, Bernie’s attacks on billionaires play exceptionally well.

Liberal Democrats have only themselves to blame for the pickle they find themselves in.  They stoked the flames of class warfare to try to bring down Trump, and instead fomented a problem within their own party.

The rejection of Sanders by older black voters is the only impediment keeping him from locking up the nomination already.  Sanders has had much greater success with Hispanics than with African Americans, and no one has fully explained why.

Pundits pretend that Biden inherits support by blacks for Obama, for whom Biden served as Vice President for eight years.  But that was years ago and it is unlikely that many voters care for whom Biden carried water in the White House.

Instead, illegal immigration is probably a major reason for the immense divide in support for Sanders, both racially and geographically.  Black voters in South Carolina are not likely to support Sanders’ agenda to open our southern border and let hordes of low-income workers come in.

Latinos are more enthusiastic about Bernie’s demand that driver’s licenses be given nationwide to illegal aliens, and that the spigot be turned on for more entitlements to flow to them.  Bernie swept Nevada after pandering to illegals in a way that does not sell so well to Democrats of any race in the South.

More difficult to explain is why liberal elites in the Northeast have turned against Bernie, hammering him with disparaging comments.  Bernie’s policies are what these other Leftists have themselves advocated for years.

But Bernie really means it, and that seems to alarm those who advocated similar policies merely to attract votes against Republicans.  Bernie intends to go after billionaires and Wall Street and crony capitalism, from which many liberals derive their wealth.

The inability of billionaires to make a difference in the race may be disconcerting to the power-brokers behind the curtain.  Tom Steyer spent over $250 million of his own fortune on his campaign and yet did not win a single delegate.

Bernie, in contrast, raised $34.5 Million in the fourth quarter, with an average donation of only $18.53, plus $25 million in January and another $46 million in February.  The have-nots are fueling his candidacy, and the Democrat Establishment is running scared from them.

Bernie is openly contemptuous of the elites in the Democrat Party, and in the Senate he is an independent rather than a Democrat.

The most common occupation of Bernie’s donors is “teacher,” and the U.S. Postal Service is one of his donors’ most common employers.  Wal-Mart, which has a non-unionized workforce thought to be conservative-leaning, is another common employer of Sanders donors.

The small average donation means that Sanders can raise far more from his same supporters if necessary.  He has emphasized that the Democrat Party should not deny him the nomination if he wins merely a plurality rather than a majority of delegates.

Sanders has raised much more from small donors than Joe Biden has from large ones.  Meanwhile, Mike Bloomberg can use his personal wealth to vastly outspend Sanders, but that cannot translate into enough votes or delegates for Bloomberg.

The result is a delightful quandary from the perspective of Republicans, who expect that the nomination of Sanders would pave the way to a recapture of the House of Representatives by the GOP in November.

What You Need to Know is thank Trump for the end of Roe v. Wade. As great as the March for Life was last week and excited as my family was to … END_OF_DOCUMENT_TOKEN_TO_BE_REPLACED

What You Need to Know is Joe Biden’s ego will be his undoing. He should drop executive privilege and get this classified documents investigation over … END_OF_DOCUMENT_TOKEN_TO_BE_REPLACED

Phyllis Schlafly Eagles · February 3 | "Woman" Is the Word of the Year The internet is a powerful tool that most of us use every day. … END_OF_DOCUMENT_TOKEN_TO_BE_REPLACED