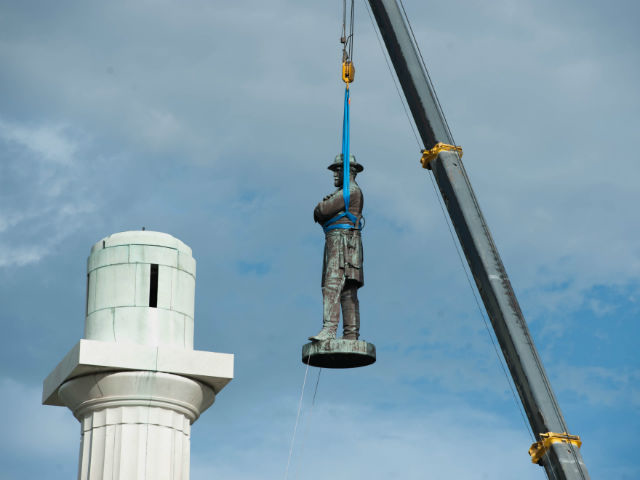 “Sad to see the history and culture of our great country being ripped apart with the removal of our beautiful statues and monuments,” President Trump tweeted last week. “You can’t change history, but you can learn from it. Robert E Lee, Stonewall Jackson – who’s next, Washington, Jefferson? So foolish!”

The mob violence did not stop with Confederate generals, but quickly extended to statues of ordinary soldiers, and then to other great historical figures.

Christopher Columbus was attacked with a hatchet in Detroit, Abraham Lincoln was burned in Chicago, and the recently canonized Father Junipero Serra was spray-painted with the word “murder” at Mission San Fernando, California.

In Annapolis, Maryland, a sculpture of Chief Justice Roger Taney was hoisted from its massive pedestal and hidden in an undisclosed location as payback for Taney’s opinion in the 160-year-old Dred Scott case. In Baltimore a Columbus monument erected in 1792 was attacked with a sledgehammer and in New York City, the Council Speaker has demanded a review of the massive, 76-foot-high sculpture at the center of Columbus Circle.

After President Trump asked “Where does it stop?,” some amateur historians responded by claiming that Robert E. Lee was a “traitor” who committed “treason” against the United States. Such comments are ignorant and wrong, for the simple reason that the 11 Confederate states that Lee fought for are now part of the United States.

The Fourteenth Amendment, which became part of the Constitution in 1868, sets forth the conditions under which the defeated Southern states were readmitted to the United States on an equal basis with all other states. Nearly all who fought for Southern independence were restored to full citizenship on an equal footing with their counterparts who fought for the Union of North and South.

A previous generation of Americans, including those who actually fought in the Civil War, debated whether to charge General Lee and other rebels as traitors. They wisely decided not to go down that road, and it’s too late to revisit their decision now.

Some Republican weak sisters – the same people who timidly proposed civil unions as an alternative to gay marriage (remember how that turned out?) – have offered a compromise. Instead of destroying the offending statues, move them to museums or Confederate cemeteries.

Gentlemen may cry peace, peace, but there is no peace: even cemeteries are not safe from the mob bent on the destruction of history. In Los Angeles, an online petition forced the Hollywood Forever cemetery to remove a 92-year-old hunk of granite that marks – “lest we forget” – the nearby graves of 37 Confederate soldiers.

In Madison, Wisconsin, the leftwing mayor removed a two-foot plaque marking the graves of 140 Confederate soldiers who died in a Union prison at Camp Randall after surrendering in battle. In Boston, where over 600 Confederates were held at Fort Warren, a granite slab bearing the names of 13 who died in prison was boarded up so their names cannot be seen.

History teaches what happens when a revolution gets out of hand, and it’s not pretty. When law and order are overthrown, the mob rules.

When the French Revolution reached its peak of mob violence in 1793, the revolutionaries were not satisfied with slicing off the heads of their deposed king, Louis XVI, and his wife, Marie Antoinette. They also invaded the church of St. Denis, where French kings and queens for the preceding 1,000 years had been buried under monuments and statues that marked their lives and reigns.

The mob opened more than 100 tombs and scattered the remains so that the royal bones could never again be identified and reassembled. Then they marched to Notre Dame Cathedral, where they destroyed all vestiges of Christianity and turned the sanctuary into a “temple of reason.”

In our hometown of Alton, Illinois, two Civil War-related monuments have stood for more than a century at opposite ends of town. On the east side, a flamboyant 110-foot column, topped by a winged sculpture of an angel and flanked by a pair of enormous eagles, honors Rev. Elijah P. Lovejoy, the anti-slavery newspaper publisher who died defending his printing press from a mob on Nov. 7, 1837.

On the quieter western edge of town, a simple but elegant granite obelisk, 58 feet tall, marks the final resting place of 1,354 Confederate soldiers who died as prisoners of war in Alton’s federal prison. More than 13,000 Confederate soldiers and civilians were imprisoned there under horrific conditions during the war, resulting in as many as six to 10 deaths a day.

For as long as civilization has existed, the end of life on earth has been a time to remember the dead and to reflect on what their lives meant to us who survive. It’s time for the grave robbers and defilers to stand down, or if they will not, to be put down by the law. Requiescat in pace.

What You Need to Know is we are in a proxy war with Russia. Until now, we’ve been able to at least try to say we have given Ukraine defense weapons … END_OF_DOCUMENT_TOKEN_TO_BE_REPLACED

What You Need to Know is a lesson on documents and double standards. Suddenly everyone has classified documents and everyone is spinning the stories … END_OF_DOCUMENT_TOKEN_TO_BE_REPLACED

What You Need to Know is to thank the Freedom 20 who took up the House Speaker fight last week. Get the list here — it only takes 3-5 minutes … END_OF_DOCUMENT_TOKEN_TO_BE_REPLACED

Phyllis Schlafly Eagles · February 3 | "Woman" Is the Word of the Year The internet is a powerful tool that most of us use every day. … END_OF_DOCUMENT_TOKEN_TO_BE_REPLACED

What You Need to Know is Rand Paul's wife is right! Senator Rand Paul was attacked a few years ago by his neighbor who was left-leaning. When Nancy … END_OF_DOCUMENT_TOKEN_TO_BE_REPLACED

What You Need to Know is Rand Paul's wife is right! Senator Rand Paul was attacked a few years ago by his neighbor who was left-leaning. When Nancy … END_OF_DOCUMENT_TOKEN_TO_BE_REPLACED

What You Need to Know is Tucker is allowing the will of the people to be heard! When a huge block of Republicans and so-called conservatives are … END_OF_DOCUMENT_TOKEN_TO_BE_REPLACED