When President Reagan was finishing his second term in office, the anti-family Left was preparing their agenda for a liberal President Michael Dukakis. While George Bush, like Ronald Reagan, advocated for a federal child care tax credit to give parents the choice of how to provide care for their children, Dukakis and his cohorts on the Left wanted to create a massive federal daycare bureaucracy to functionally impose government child care onto the poor. Throughout that important fight, and specifically through the February and July 1989 issues of the Phyllis Schlafly Report, Phyllis proved the superiority of family-based childcare over government-based child care. Despite the numerous times Phyllis Schlafly beat back the anti-family Left on this issue, federal daycare continues to be a hot-button issue every couple of years. That is why it is especially important for us to learn from the timeless pro-family principles Phyllis invoked on this topic.

When the government daycare conspirators realized that the pro-family Reagan would never approve of their anti-family proposal, many suggested that the 1988 presidential election become a referendum on what America wanted to do with their children. Obviously, they changed their tune when Bush took office. Phyllis taunted that, “The Senate Democrats are trying to undo the results of last November’s election. They want people to forget that federal-daycare-Dukakis lost and nondiscriminatory-tax-credit Bush won.” Government-run child care had an inherent PR problem: no one, even those who are generally in favor of government regulation, would want grandmothers to need registration in order to take care of their own grandchildren. That is exactly what government-run child care would do. It would blindly impose standards regardless of whether the child care provider was a family member, a church daycare center, or some other similar institution. Liberals thought that they could just “proclaim a ‘crisis,’ wrap it in ‘children,’ and try to intimidate Congress into funding a new middle-class entitlement” as Phyllis would write in her column from November 5, 1997. However, these liberals were sorely mistaken.

Pro-family conservatives won the debate on government-run childcare because they pointed out the axiom that follows almost every government-controlled industry: Government is incapable of delivering a product or service in a way that is the most affordable, effective, or fair. If regulations are blind and unfeeling, why would we want to impose them on child care? Leftists might disguise them as well-meaning health and safety standards to protect young people, but Phyllis Schlafly cut right to the truth. “The grandmother would be required to demonstrate that she complies with federal health, safety, and nutrition standards, and would have to submit daily reports proving that the food she feeds her grandchildren meets these standards. For example, she would have to vouch that the sandwich she serves her grandchildren has at least three tablespoons of peanut butter or 1-1/2 ounces of cheese.” When brought in that light, who but the most cold-hearted liberal could endorse such nonsense? Phyllis Schlafly was a master of recognizing the flaws that emerge when liberal ideology is brought into reality, and she was a master of convincingly pointing out those flaws to the American people.

Ultimately, the pro-family victory was two-fold. First, George H. W. Bush’s stance against government overreach into child care is one of the key stances that propelled him into the White House in 1989. Second, the pro-family victory on this issue manifested in the Child Care Tax Credit, which was passed by a Republican Congress in 1997. That credit allows parents to choose where the money will go to take care of their children, whether to day care centers, religious groups, family members, or full-time homemakers. The debate on government daycare is far from over. The issue pops back into popularity every few years as it did in the 2016 presidential race. If conservatives are to win on this and other key issues, we must show liberal policies at their logical conclusion. We must show the grandmother who is forced to register with the federal government in order to take care of her grandchildren as Phyllis did in the February and July 1989 issues of the Phyllis Schlafly Report. Liberals have mastered the art of exploiting children as a front for their overreaching policies. We must counter with the reality of the actual people who are hurt by these policies. As conservatives, we fight for ideals only because of the faces behind them. We are not cold and unfeeling as some would make us out to be. Whether the issue is child care, healthcare, immigration, or trade policy, each of these issues have faces behind them of people who would be at a severe detriment by implementation of the liberal agenda. Conservatives need to remind all Americans that we fight for people, and for their right to work, worship, speak, raise their families, and live free of oppressive and unnecessary government interference.

To view the February and July 1989 issues of the Phyllis Schlafly Report in their entirety, please click on the images below. 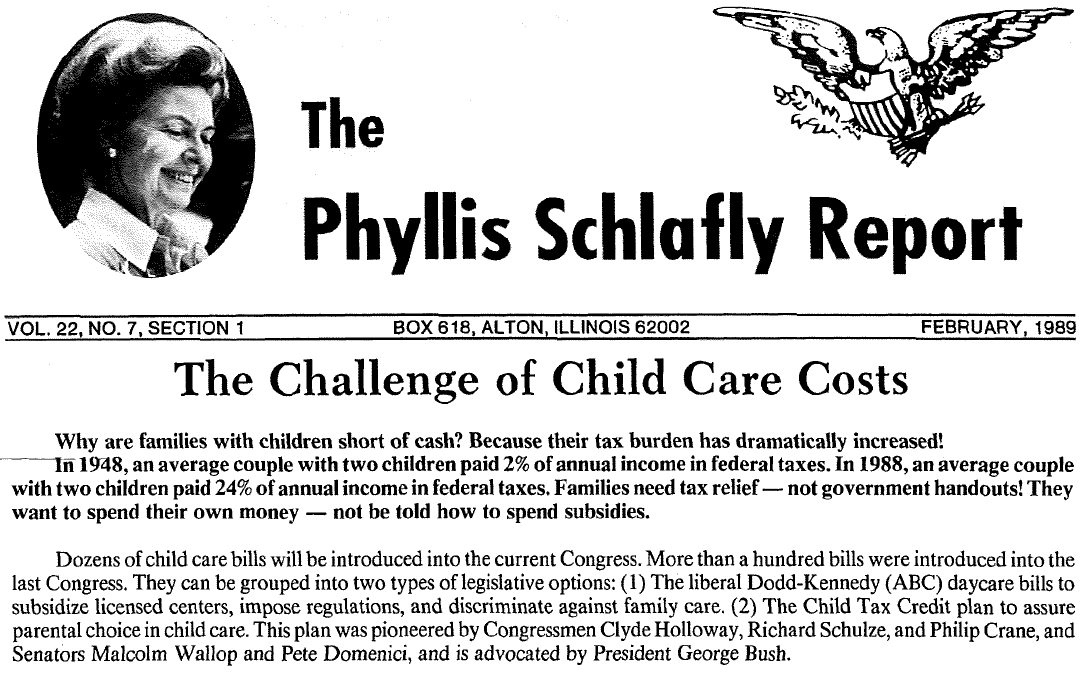 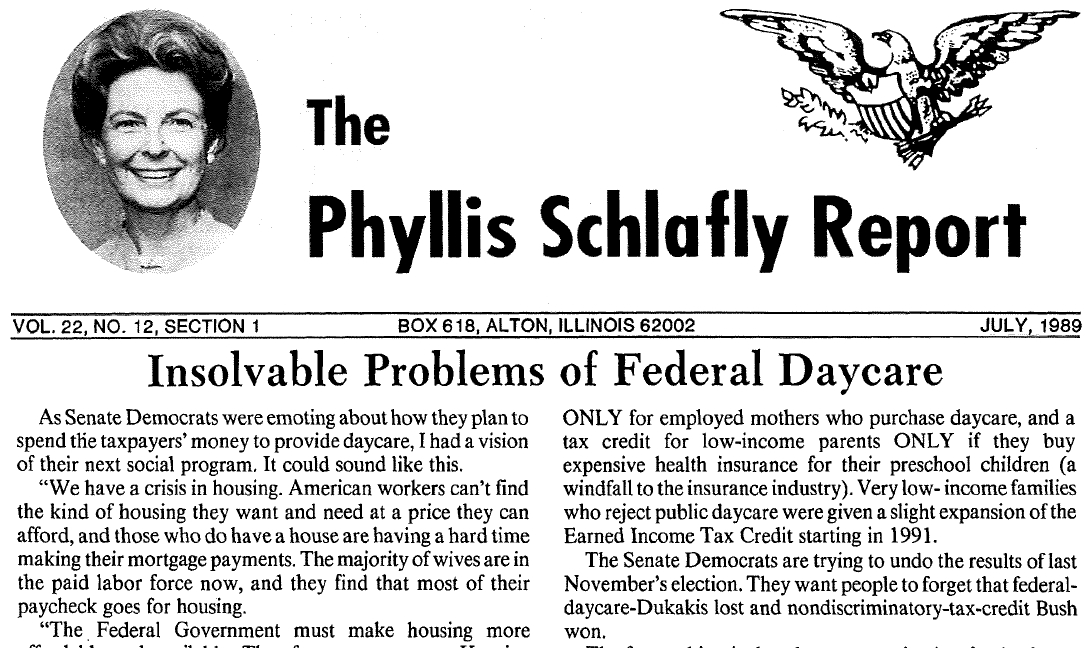 What You Need to Know is Nancy Pelosi and her colleagues are locking the American people into a solitary bubble. People are brainwashed and trapped in … END_OF_DOCUMENT_TOKEN_TO_BE_REPLACED

What You Need to Know is Montpelier is going Woke. Soledad O’Brien is now on the board of directors of Montpelier, James Madison’s home. She is part … END_OF_DOCUMENT_TOKEN_TO_BE_REPLACED

Phyllis Schlafly Eagles · #WYNK: Montpelier is going Woke | May 19, 2022 #ProAmericaReport The following is a transcript from the Pro America … END_OF_DOCUMENT_TOKEN_TO_BE_REPLACED

What You Need to Know is our election system is broken! It's failing and We the People have no confidence in the system. Pennsylvania has shown again … END_OF_DOCUMENT_TOKEN_TO_BE_REPLACED

Biden’s Plan to Buy Votes  As the midterm elections fast approach, Democrats have lost a key demographic that they relied on in 2020: … END_OF_DOCUMENT_TOKEN_TO_BE_REPLACED

Phyllis Schlafly Eagles · May 16 | The Trickle-Down Effect of Bad Policies Good news arrived in the district court of the District of Columbia, … END_OF_DOCUMENT_TOKEN_TO_BE_REPLACED