For someone as accomplished as Phyllis Schlafly, the question “What’s the most fulfilling thing you’ve ever done?” carries a lot of weight to it. The answer, which was given in the March 1994 Phyllis Schlafly Report aptly titled “The Most Fulfilling Thing I’ve Ever Done,” will certainly shock you. To Phyllis, her most fulfilling victory was not starting the conservative movement, working with President Reagan, or even defeating the Equal Rights Amendment. The answer is not just one that will amaze, but one that will inform you of the best way to ensure a prosperous future for our children and our nation. What was this most fulfilling accomplishment of Phyllis Schlafly?

In Phyllis’s own words, the most fulfilling thing she ever did was to teach her children how to read. Phyllis understood that a child’s ability to read opens the door for him to become a productive and prosperous citizen. As she put it, “Most parents work hard to provide their children with the material things of life. Many parents work hard to provide their children with the spiritual things in life – faith in God, moral training, and good and healthy habits. There is something else you can do for your child that is important to both goals – because it’s the key to what your child will be able to do on his own. You can teach your child to read.” Clearly, reading was something Phyllis placed in very high regard.

This made it all the more shocking to know that many schools are not teaching students to the point of proficiency in reading from the time-tested phonics method. Instead, they rely on bad systems like the “Whole Language Method,” which is basically a literary guessing game where kids pretend to be reading something by guessing at pictures. This shocking problem combined with the great import of literacy led to the publication of one of the most popular books Phyllis Schlafly ever published. The First Reader and its cousin for older children and adults called Turbo Reader are still in print today and available for purchase because parents still want to teach their children how to read the right way.

However, Phyllis Schlafly knew that literacy was the cure not only for individual underachievement but for social maladies as well. She called it “an urgent necessity for our whole nation.” Reading has the power to lift entire communities that have been impoverished for generations. Reading can open doors for careers and opportunities that were never thought possible. What’s more, anyone in any income bracket can teach their child how to read. The internet and public libraries make almost any information freely available to all who know how to read. Yet, if someone cannot read well enough to communicate effectively, they will never be able to advance themselves or their children and live out the American Dream. Therefore, we must recognize that any politician who claims to care about the next generation, and particularly those who are a minority or impoverished, must care about reading being taught the right way.

Parents cannot rely on Washington, their states, or even their local school boards for this fundamental prerequisite to success in life. We, too, can share in the fulfillment Phyllis felt in what she called “the most fulfilling thing I’ve ever done.” Just as the March 1994 Phyllis Schlafly Report called for action by individuals as well as communities, we must take on an individual responsibility for the promulgation of literacy to those that need it most.

To read the March 1994 Phyllis Schlafly Report in its entirety, please click on the image below. 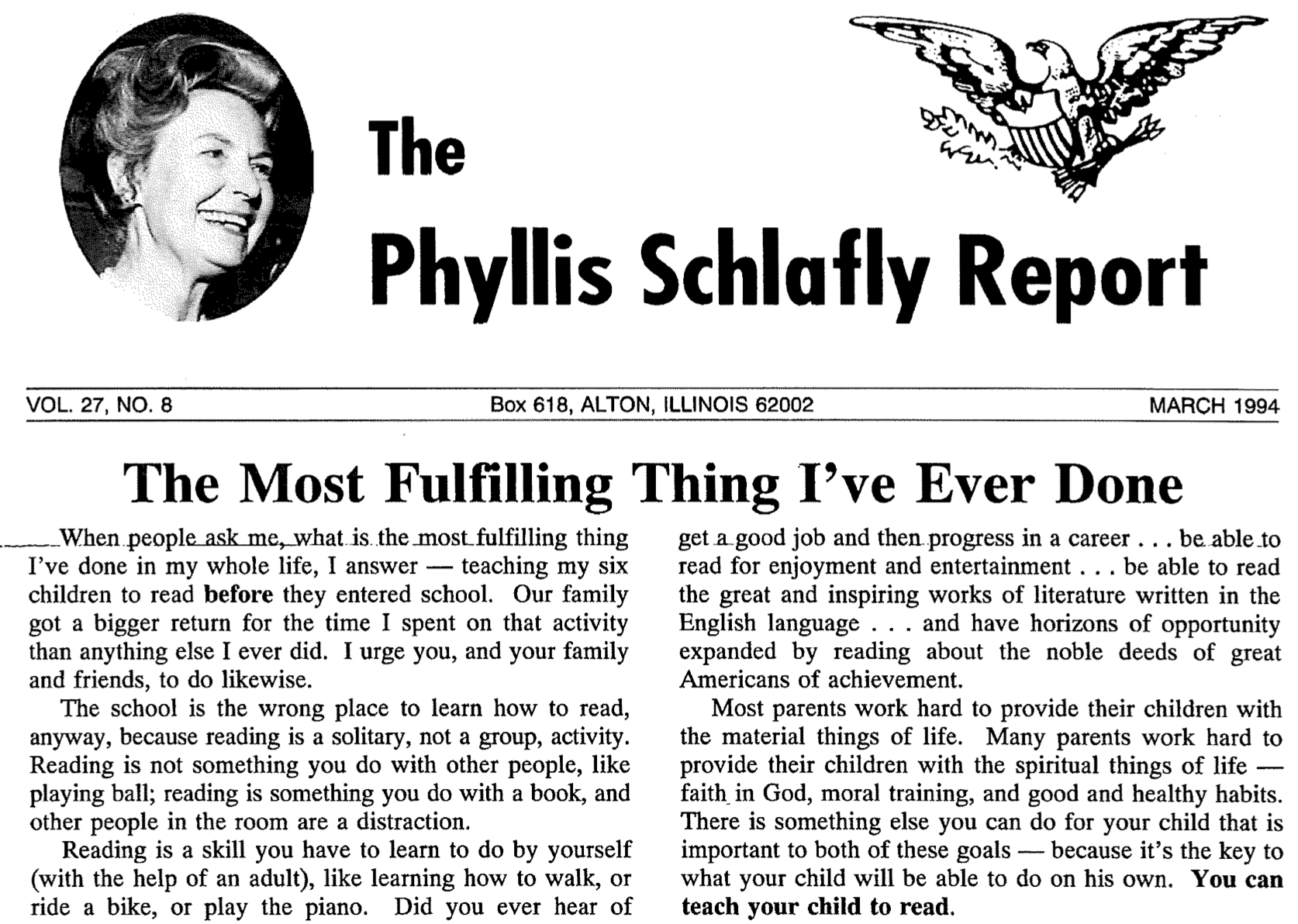 What You Need to Know is the Media and Democrats are spinning! Coverage up to the November elections will tell us it's close even though it's not. See … END_OF_DOCUMENT_TOKEN_TO_BE_REPLACED

Phyllis Schlafly Eagles · #WYNK: It's 1894 In 2022 | September 30, 2022 #ProAmericaReport The following is a transcript from the Pro America … END_OF_DOCUMENT_TOKEN_TO_BE_REPLACED

What You Need to Know is the comparison from 1894 to 2022. We are in a similar situation as in 1894. They were in a recession back then. There was a … END_OF_DOCUMENT_TOKEN_TO_BE_REPLACED

What You Need to Know is watch out for Election Fortification surprises! Once political actors get away with or even awarded for meddling in our … END_OF_DOCUMENT_TOKEN_TO_BE_REPLACED

Phyllis Schlafly Eagles · September 28 | The Politicization of the School Lunchroom There are all kinds of labels on food these days. You may have … END_OF_DOCUMENT_TOKEN_TO_BE_REPLACED

What You Need to Know is Pelosi, pills, and pain. Pelosi has failed us again: she is the only dictator in American political life. She dominates the … END_OF_DOCUMENT_TOKEN_TO_BE_REPLACED

What You Need to Know is we are in a unique moment and Donald Trump is stepping up to it. Even some of the rabid leftists have to admit that President … END_OF_DOCUMENT_TOKEN_TO_BE_REPLACED

Phyllis Schlafly Eagles · October 5 | Follow the Science on Monkeypox As Americans try to put Covid behind us, another frightening virus has … END_OF_DOCUMENT_TOKEN_TO_BE_REPLACED