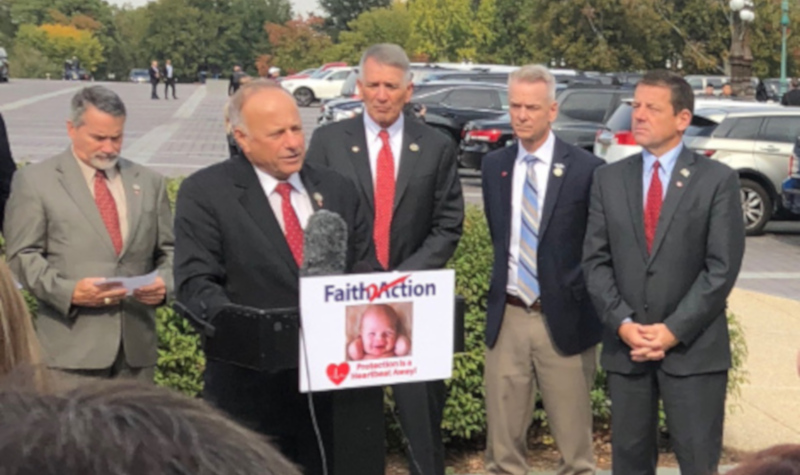 In rhetoric, an ad hominem is when a speaker attacks the person making an argument rather than addressing the argument itself. This weak logical fallacy is extremely common in politics. Every time you hear an enraged liberal call conservatives Nazis, you are hearing an ad hominem attack.

Rather than discussing the substance of the points being brought forth by the conservatives, the liberal is calling conservatives a mean name in an attempt to discredit them.

Another example of an ad hominem is when pro-abortion people tell a male pro-lifer that his opinion does not matter on abortion because he cannot have babies. Rather than address the pro-life arguments of the man, they want to silence his voice, effectively cutting their opposition in half.

This tired argument isn’t just coated in logical fallacy. It’s dripping with hypocrisy too. After all, when was the last time you heard a pro-abortion person tell a pro-choice male to pipe down on the abortion issue?

Without a doubt, many if not most of the nation’s most prominent pro-life leaders are women. Yet, the seven most influential figures in the pro-abortion movement were all men.

The men I’m referring to are the seven male Supreme Court justices who formed the majority opinion of Roe v. Wade, declaring it unconstitutional for a state to outlaw abortion.

For pro-abortion women so bent on keeping pro-life men out of the discussion, I’d really like to know what makes those unelected male lawyers more equipped to make those decisions than female state legislators. For pro-abortion people to be consistent in their call for men to stay out of the abortion issue, they themselves would have to reject the Roe v. Wade decision, the Doe v. Bolton decision, and every other ruling ever passed by our male-dominated Supreme Court.

Pro-life men should not be silenced by these unfounded ad hominem attacks. Real men of character should be applauded for fighting to protect those who are unable to protect themselves.

What You Need to Know is life matters across the board because it’s a great gift from God. The moment we’re in for the life movement is really key, … END_OF_DOCUMENT_TOKEN_TO_BE_REPLACED

What You Need To Know about Biden’s worst week as President. Andrea Kaye, guest host of the #ProAmericaReport, explains how this has been the worst … END_OF_DOCUMENT_TOKEN_TO_BE_REPLACED

What You Need To Know is the SCOTUS victory is overshadowed by how we got here in the first place. Guest Host Andrea Kaye breaks down the High Court’s … END_OF_DOCUMENT_TOKEN_TO_BE_REPLACED

If the education establishment wants to know why public schools don't get much respect from our citizenry, they need look no further … END_OF_DOCUMENT_TOKEN_TO_BE_REPLACED

Robert Strange McNamara belongs on the daytime soap operas. Better yet, his histrionics belong on Donahue or Geraldo or Sally Jesse Raphael. We are … END_OF_DOCUMENT_TOKEN_TO_BE_REPLACED

What You Need to Know about Biden’s woke SCOTUS pick. President Biden is choosing a Supreme Court judge based off of race and sex. While he’s trying … END_OF_DOCUMENT_TOKEN_TO_BE_REPLACED