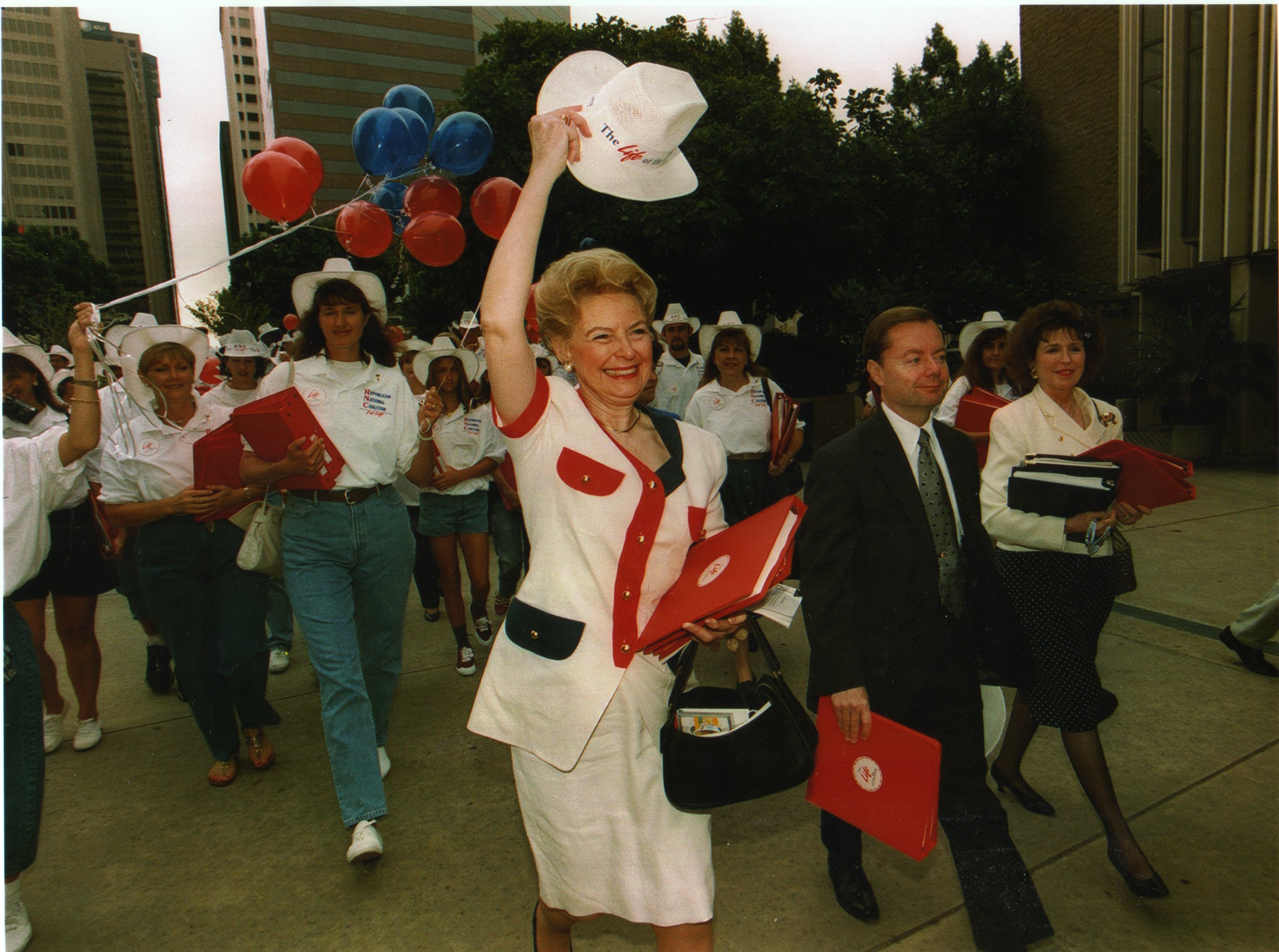 In 1971, the tide of public opinion ran against abortion. Every single pro-abortion bill was shot down in state legislatures in ’71 and ’72. However, the issue changed in 1973 with the Roe v. Wade and Doe v. Bolton decisions, which made first trimester abortion restrictions illegal in all 50 states. Far from settling the abortion issue for all time, “it was the beginning of a long legal and political battle.”

At this point, the Republican Party had yet to take a firm stance one way or another on abortion. The Republican Platform question was still wide open. Phyllis Schlafly recognized this as an issue, because the Platform enables the party to express the grassroots will of the constituency. When an issue is defined in the party platform, it frames the discussion within the party and allows voters to see what a candidate should stand for.

1980 was the Reagan revolution, which led to a more conservative Republican party that emphasized conservative social stances and family values. Thanks to Phyllis and the Platform Committee, the Republican Platform affirmed its support for unborn children. They also removed the pro-Equal Rights Amendment plank. If the ERA had been ratified, it would likely have led to constitutionally protected taxpayer-funding for abortions.

1984 was the year that Phyllis described the pro-life plank as locked-in to the platform. The platform stated that “The unborn child has a fundamental individual right to life which cannot be infringed. We therefore reaffirm our support for a human life amendment to the Constitution, and we endorse legislation to make clear that the Fourteenth Amendment’s protections apply to unborn children.” This was the strongest pro-life wording yet in the Republican Platform, and Phyllis was prepared to defend this plank.

In 1990, pro-choice Republicans started raising money to try and remove the pro-life plank from the Republican Party Platform. Phyllis got in touch with pro-life organizations to see if they would help in this fight, but they opted not to because they wanted to remain nonpartisan.

Phyllis then realized that it was up to her to protect the pro-life plank, so she started the Republican National Convention for Life. In preparation for the 1992 convention, they ordered 3,000 red cowboy hats for people to wear to signify their support for the pro-life cause. The pro-choice Republicans lost spectacularly, and the Platform passed the pro-life plank with a vote of 84-10.

In 1996, they knew they had to hold fast to the plank with its exact 1984 wording. They decided not to make the slightest change, because, as Phyllis states in her book How the Republican Party Became Pro-Life, “if we did, that would give the media the opportunity to report that we had softened our solid pro-life position.” The pro-choice Republicans worked to water down the pro-life plank, but the delegates on the platform committee, which included Phyllis, stood firm and refused to let them change it. The same year, the Democratic Platform supported abortion in all circumstances, and financed by taxpayers.

Prior to the 2000 Republican National Convention, Phyllis and the RNC for Life held a lively party in Philadelphia. They then adopted the slogan “LIFE of the Party.” Phyllis stated that the Republican Platform supported “legal protection for ‘the fundamental individual right to life’ of the unborn baby.” It also opposed tax funding for abortions.

By 2008, the RNC for Life had turned the Republican Party into the pro-life party. “The 2008 platform isn’t about personalities, it’s about principles,” Phyllis explained. She said that the 2008 platform “becomes the most pro-life ever by endorsing the Born Alive Infants Protection Act and the ban on partial-birth abortion.” It stayed with the same strong pro-life stance that has been in the platform since 1984. The future was hopeful for the pro-life movement, because “The 2008 Republican platform has given conservatives a new lease on life and started the rebuilding of the conservative movement.” The Democratic Platform said that they supported “a woman’s ability to make her own life choices,” particularly regarding abortion.

2016 was Phyllis Schlafly’s last Republican convention, and it was a good one. She did not serve on the Platform Committee, but she attended every meeting and contributed to the fight to keep the Republican party pro-life. The pro-life plank was once again strengthened.

The Democratic Party still continues to support abortion in all circumstances, while the Republican Platform still retains the unapologetically pro-life plank. The pro-life plank exists to this day thanks to Phyllis Schlafly. The future of abortion is still uncertain, and we must continue to work hard to implement the pro-life stance of the Republican Party to the fullest extent.

Phyllis Schlafly Eagles · June 30 | Pro-Life Without Exceptions: Life of the Mother Enemies of the pro-life movement know that they can never win … END_OF_DOCUMENT_TOKEN_TO_BE_REPLACED

What You Need to Know is How America is Winning and Losing. One way we are losing in America is how the Narrative Machine is reporting the Jan. 6th … END_OF_DOCUMENT_TOKEN_TO_BE_REPLACED

Phyllis Schlafly Eagles · June 29 | Pro-Life Without Exceptions: Health of the Mother Empty emotional appeals are the only way for pro-choicers to … END_OF_DOCUMENT_TOKEN_TO_BE_REPLACED

Phyllis Schlafly Eagles · #WYNK: Happy birthday to America! | July 1, 2022 #ProAmericaReport The following is a transcript from the Pro America … END_OF_DOCUMENT_TOKEN_TO_BE_REPLACED