The scandal of Virginia’s Democratic Governor Ralph Northam has peeled back the curtain on a little-known corner of the abortion industry. What happens when the infant survives an abortion to be born alive?

What Governor Northam approves, however, is infanticide. Speaking with the authority of a board-certified pediatrician, Northam said, “If a mother is in labor, I can tell you exactly what would happen.”

Governor Northam is not just a politician, he’s a medical doctor with a specialty in pediatric neurology. Even after 12 years as an elected official, Northam remains a member of the medical staff at a children’s hospital in Norfolk. 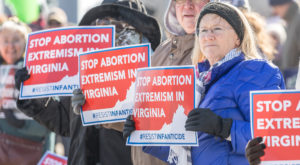 “More concerning to abortion rights advocates,” the Post continued, “the abortion debate is now fixed on the least popular aspect of the measures in Virginia and elsewhere.” The “new attention” to late-term abortion is “not helpful” to their cause.

That “discussion” would not be whether to wrap the baby in pink or blue. Not about whether to start a college fund. Not about teaching the new mother how to breastfeed her new baby.

No, the discussion would be whether to leave the baby on a table without care or sustenance until it stops breathing and turns cold. The practice of abandoning a newborn to die is known as infanticide, which the civilized world has prohibited since Christianity took over the Roman Empire in the fourth century A.D.

Northam pretended that “When we talk about third-trimester abortions, it’s done in cases where there may be severe deformities. There may be a fetus that’s non-viable.”

In fact, severe fetal deformity explains only a small fraction of late-term abortions. This is confirmed by the Guttmacher Institute, which is a spinoff of Planned Parenthood.

The Washington Post let the cat out of the bag, reporting that the uproar over Northam’s comments “has disrupted carefully laid plans to bolster abortion rights across the nation after President Trump elevated Brett Kavanaugh to the Supreme Court.”

In other words, the spate of pro-abortion legislation in Virginia, New York, and several other states didn’t just happen. It was part of a national campaign by the abortion industry “to push state laws that would maintain access to the procedure if the national protections are knocked down” by the Supreme Court.

“More concerning to abortion rights advocates,” the Post continued, “the abortion debate is now fixed on the least popular aspect of the measures in Virginia and elsewhere.” The “new attention” to late-term abortion is “not helpful” to their cause.

The mystery is why the abortion industry chose “to push measures that would loosen restrictions on late-term abortions,” which we’re told are very rare. Actually, they are not that rare: Guttmacher estimates over 10,000 a year, which is about the same as the number of people shot to death each year.

A late-term abortion, by definition, is performed after the point at which the unborn child can survive outside the womb, provided it receives appropriate care. Late-term abortions are typically done by injecting a poison intended to cause cardiac arrest, which results in “fetal demise” before it is delivered.

But sometimes the lethal injection fails, and the baby is delivered alive. That’s where Dr. Northam’s cruel position kicks in.

Some years ago Hadley Arkes, the retired professor of Jurisprudence and American Institutions at Amherst College, asked a prophetic question. Does a woman’s constitutional right to terminate her pregnancy necessarily entail the right to a dead baby?

“That is not what happens in these cases,” Clinton replied, seemingly flustered by Trump’s forthright declaration. “And using that kind of scare rhetoric is just terribly unfortunate.”

A fact checker for the Washington Post predictably came to Hillary’s defense, claiming that “only” 1.3 percent of abortions occur after 21 weeks, when the infant can survive outside the womb. But that 1.3 percent is more than 10,000 people, which is still a shocking number.

As the new poster boy for late-term abortion, should Ralph Northam resign as governor of Virginia? No, he should remain in office until it’s time to fill the next vacancy on the U.S. Supreme Court.

What You Need to Know is President Biden is Targeting Republicans! President Biden has given a speech saying that if anyone supports Trump they are … END_OF_DOCUMENT_TOKEN_TO_BE_REPLACED

Phyllis Schlafly Eagles · August 31 | Men and Abortion Among the many good things to come out of the Dobbs decision by the Supreme Court, the … END_OF_DOCUMENT_TOKEN_TO_BE_REPLACED

What You Need to Know is The Narrative Machine is Obsessed with Trump! First, it used to be called the Trump Exhaustion Syndrome now the left is … END_OF_DOCUMENT_TOKEN_TO_BE_REPLACED

Phyllis Schlafly Eagles · September 20 | LIV Golf Delivers a Hole in One LIV Golf has appeared as the foremost competitor to the PGA, which has led … END_OF_DOCUMENT_TOKEN_TO_BE_REPLACED

Phyllis Schlafly Eagles · September 28 | The Politicization of the School Lunchroom There are all kinds of labels on food these days. You may have … END_OF_DOCUMENT_TOKEN_TO_BE_REPLACED