Anyone can pontificate about their views on politics. However, it takes a truly dedicated and tactical leader to boldly expose the feminist propaganda in the textbooks put in the hands of college students. She called one typical textbook a “collection of propaganda essays to sell students on radical feminism.” Never one to mince words, Phyllis advised students to “not waste their tuition dollars taking women’s studies courses.” Even outside of the women’s studies department, many professors use the bully pulpit of their professorship to force the victimhood ideology of feminism down the throats of unsuspecting young people. They paint women as oppressed at the hands of a “merciless patriarchal system” devoted to maintaining the “subjugation” of women under men. Of course, most Americans who are outside the bubble of university liberalism find reality to be quite different. That is one more reason why America voted for President Donald Trump over Hillary Clinton, a candidate who essentially ran on a platform of defeating this patriarchy.

The bubble of university liberalism also shields unsuspecting students from the realities of communism and socialism. While simultaneously calling our conservative president a Nazi, they fail to teach students that the word “Nazi” literally stands for “National Socialist Worker’s Party.” Whether or not students hear it from their history professors, it is the socialists on the left who more closely align with the politics of the Third Reich. Furthermore, those same biased professors teach that Marxism has never failed. Anyone who has even a cursory knowledge of the history of such countries as Russia, China, or North Korea know that nothing could be further from the truth. Yet in the academic bubble, truth is not a highly sought-after value. As Phyllis put it in the April 2014 Phyllis Schlafly Report, “Professors believe their political convictions excuse them from rigorous standards of academic inquiry.” Where truth is not seen as the paramount virtue in an educational institution, no free discourse can ever be possible.

Part of the quest by liberal professors to blot out free discourse from college campuses comes in the form of a witch hunt against Christianity. Under the guise of so-called “non-discrimination” policies, colleges prevent Christian student groups from asking that all of their student leaders be Christians. Of course, requiring all students in a Christian group to be Christian is no different than requiring all players on a women’s basketball team to be women. Having leaders who do not fit with the mission of the group is a poison apple to the success of the group. Effectively, these universities make Christian groups choose between living out their faith in the scope of their constitutionally protected freedom of association or else leaving the tenants of their faith at risk in order to receive equal funding and exposure with other student religious groups. Students should never have to make this choice when it comes to their faith. Phyllis rightly pointed out that “Carried to its logical extension, it means that no organization can maintain integrity of beliefs.” In a college environment where the only acceptable religion is humanism, that is exactly what one might expect.

The great tragedy of the state of today’s college campuses is threefold. First and foremost, it is tragic that many of the leaders of tomorrow are not being exposed to the truth on so many fundamental issues. Second, it is tragic that so many parents are paying to send their students off to these colleges without any real knowledge of what they are paying for. Third, it is tragic that many of these propaganda machines posing as educational institutions are receiving taxpayer funding from citizens like you and me. Thankfully, the Phyllis Schlafly Report has the tools to remedy these tragedies. Not only can the Phyllis Schlafly Report be a valuable tool for students who want to know the truth they will not be taught elsewhere, but it can also give knowledge to parents and taxpayers who want to hold those schools accountable for how they spend the money they are given.

To view the April 2014 Phyllis Schlafly Report in its entirety, please click on the image below. 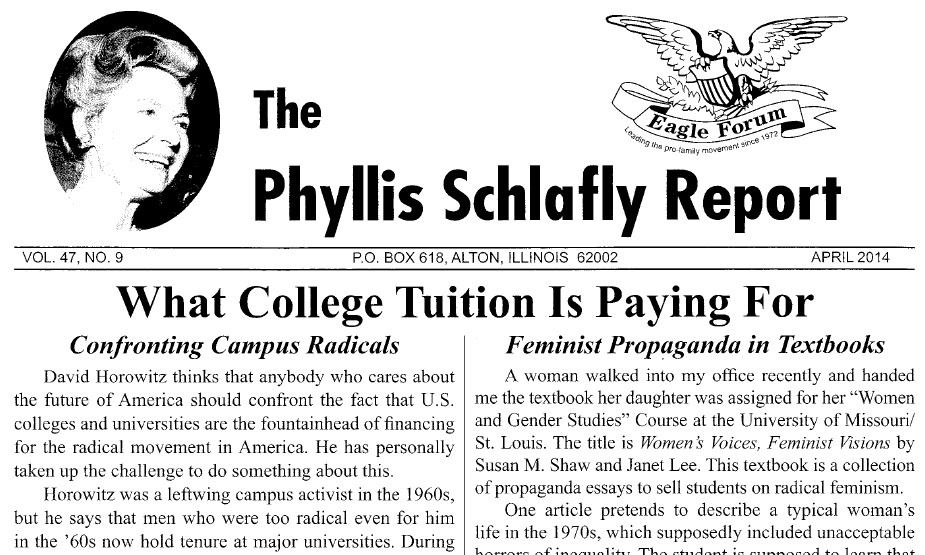 What You Need to Know is about classified documents and presidential power! Joe Biden’s unmasking may be coming, thanks to the GOP House. The DOJ has … END_OF_DOCUMENT_TOKEN_TO_BE_REPLACED 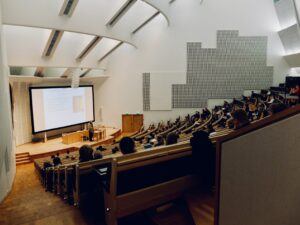 The arrest of a graduate student for the gruesome murders of four Idaho college students has attracted worldwide attention. Reports suggest a DNA … END_OF_DOCUMENT_TOKEN_TO_BE_REPLACED

What You Need to Know is we’re in a new pro-life America. Today’s March for Life is the first during which we can celebrate the overturn of Roe v. … END_OF_DOCUMENT_TOKEN_TO_BE_REPLACED

Phyllis Schlafly Eagles · #WYNK: Trump is Stronger Than Biden | January 27, 2023 #ProAmericaReport The following is a transcript from the Pro … END_OF_DOCUMENT_TOKEN_TO_BE_REPLACED