Liberals are experts at labeling terrible programs with deceptively positive titles. No greater example could be found of this malpractice than in education. While claiming to empower underachieving children to learn, they actually bring down all students who are subjected to these ineffective philosophies. While claiming to foster “success,” they actually lower the bar of what success is until even the most unmotivated student can achieve it. Speaking of one such program, Phyllis Schlafly wrote "If OBE were applied to basketball, the basket would have to be lowered so all could score equally.” If we are going to combat these programs which lower standards and increase the influence of the federal government on our children, we must learn from past successes of Phyllis Schlafly as documented in the May 1993 Phyllis Schlafly Report.

“Outcome-Based Education” was the name given to an education fad that was imposed on the schoolchildren of America in the 1990s. It postulated that rather than teaching the fundamentals of reading, writing, arithmetic, and so on, schools should base teachings on making sure all students reached certain “outcome goals.” The problem with this newfangled idea was threefold. First, liberals wanted to implement this new teaching method on the national level, which infringed on traditional local control of education and universally imposed an untested philosophy on the entire nation. Although states and communities are meant to be “laboratories of democracy” where education is concerned, the liberal mindset cannot fathom the possibility that something newer (OBE) might not be as good as something time-tested. Therefore, they want all schools to kowtow to total federal control of this matter.

The second problem with OBE is that many of the “outcome goals” imposed by the federal government were not based on a traditional understanding of what education should be. Rather than basing goals on learning the subjects of science, math, reading, and history, many of the goals were socially motivated, including such goals as “training for world citizenship,” “self-esteem,” and “adaptability to change.” Aside from the obvious concern about how one goes about testing a student for government-approved levels of self-esteem, the larger question is whether government has the right or responsibility to force children to adopt certain attitudes in the first place.

The third problem with OBE is that it did not help any students learn more. OBE required teachers to hold all students back if even one student could not or would not learn a concept. In essence, outcome-based education was the foundational principle behind the disaster known as No Child Left Behind. Under OBE, students who are able to learn faster are inhibited from reaching their full potential. However, politicians and bureaucrats like to ignore the fact that the slower learners do not benefit when their classmates are held up, either. Despite what Washingtonians would have you believe, different people are different when it comes to education. A student’s difficulty learning a concept might not be because they need more time to figure it out. The problem might be that the instructor’s teaching style does not conform to a student’s learning style. The problem might be the setting; maybe the student needs one-on-one tutoring by the teacher after class. OBE wants to force square pegs into round holes.

Ultimately, outcome-based education falls into the trap of assuming that every child can fit into the same cookie cutter shape of needing more class time on any given subject. Given that children vary so greatly, doesn’t it make more sense to allow parents and communities to control the education of their kids? From the time that the May 1993 Phyllis Schlafly Report was published to today, nothing has changed. Debunked education philosophies will never be able to replace the educational effectiveness of locally controlled schools and more importantly, active and engaged parents who take personal responsibility for the education of their children.

To view the May 1993 Phyllis Schlafly Report in its entirety, please click on the image below. 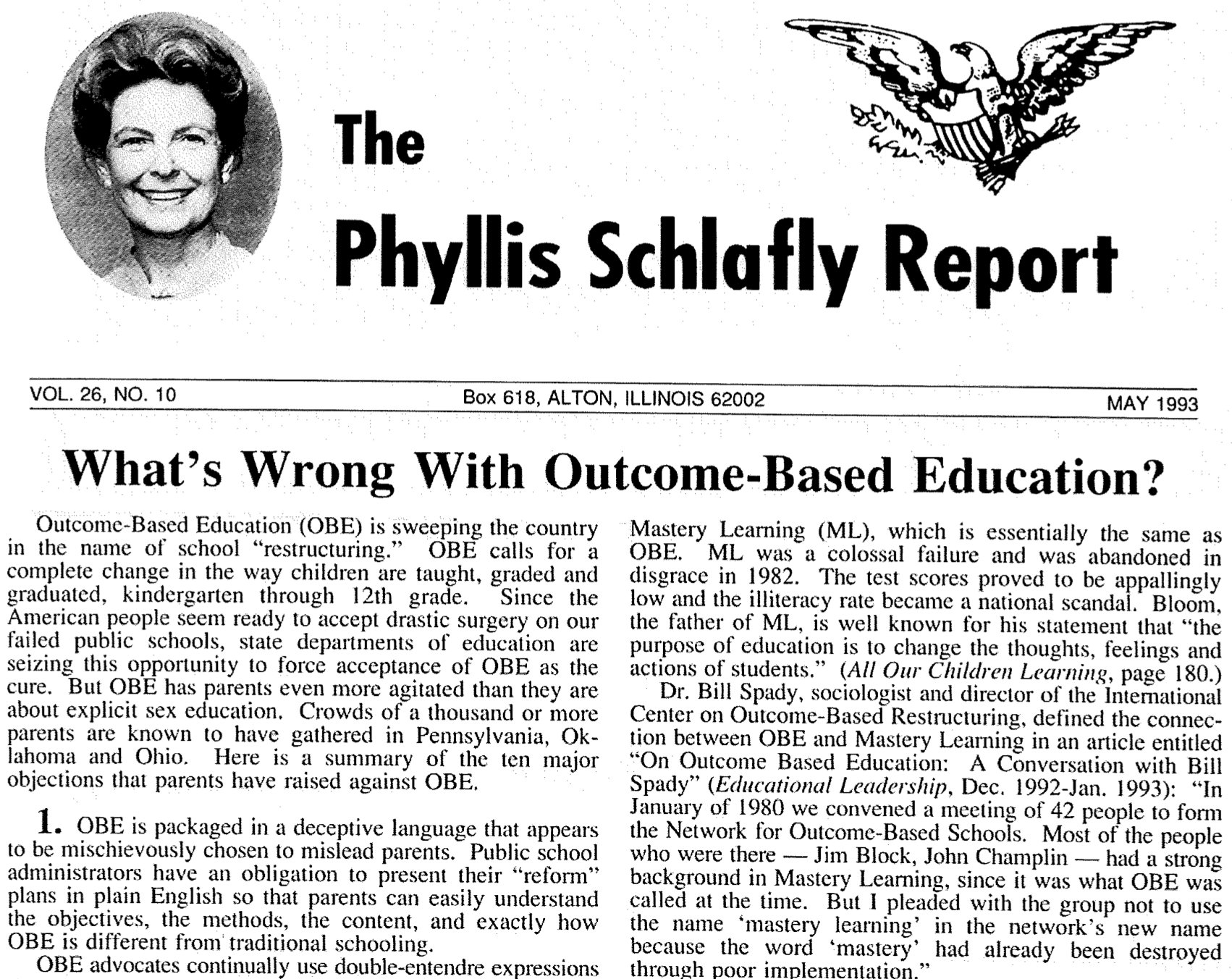 What You Need to Know is Montpelier is going Woke. Soledad O’Brien is now on the board of directors of Montpelier, James Madison’s home. She is part … END_OF_DOCUMENT_TOKEN_TO_BE_REPLACED

Phyllis Schlafly Eagles · #WYNK: Montpelier is going Woke | May 19, 2022 #ProAmericaReport The following is a transcript from the Pro America … END_OF_DOCUMENT_TOKEN_TO_BE_REPLACED

What You Need to Know is our election system is broken! It's failing and We the People have no confidence in the system. Pennsylvania has shown again … END_OF_DOCUMENT_TOKEN_TO_BE_REPLACED

Phyllis Schlafly Eagles · May 19 | Boys and Girls and Grades? ** Previously recorded by Phyllis Schlafly // May 2015 ** Colleges claim they … END_OF_DOCUMENT_TOKEN_TO_BE_REPLACED

For Immediate Release: May 10, 2022Contact: Ryan Hite, Communications Director Concerned Parents Are the Driving Force of Local and Midterm … END_OF_DOCUMENT_TOKEN_TO_BE_REPLACED

Biden’s Plan to Buy Votes  As the midterm elections fast approach, Democrats have lost a key demographic that they relied on in 2020: … END_OF_DOCUMENT_TOKEN_TO_BE_REPLACED

Phyllis Schlafly Eagles · May 16 | The Trickle-Down Effect of Bad Policies Good news arrived in the district court of the District of Columbia, … END_OF_DOCUMENT_TOKEN_TO_BE_REPLACED

What You Need to Know is the Border is about to be totally open! In just a few days we are going to see around 18,000 illegal aliens crossing our … END_OF_DOCUMENT_TOKEN_TO_BE_REPLACED