One of Phyllis Schlafly’s greatest strengths was her ability to work on an array of issues at one time. Many public policy organizations, though great allies of the conservative movement, pick a specific issue to monitor and promote. Phyllis was a key player in almost every important political issue for decades. Yet, if one were to line up all of the issues Phyllis worked on and rank them based on which ones were closest to her heart, education would be one of the most, if not the most, important issues to her. She believed, as Abraham Lincoln did, that “The philosophy of the classroom today will be the philosophy of the government tomorrow.” When parents had no voice in the classroom, she became that voice. When conservatives did not know what was happening on college campuses, she sounded the alarm to liberal shenanigans and indoctrination.

Reading through years of the Phyllis Schlafly Report is a great way to see how college education has changed through the years. Being such an important subject to her, education appeared in many issues. The November 1998 Phyllis Schlafly Report showed the culmination of more than three decades of campus decay. The Report started in the 1960s when riots on campus were in vogue. Phyllis chronicled the feminist demonstrations by college students in the 1970s and the rapid corruption of the curriculum in the 1980s. By the time 1998 rolled around, conservatives were struggling just to exist on college campuses.

When leftist protesters grew into leftist professors and university administrators, they dragged entire institutions down with them. Open discourse about politics, religion, and morality was all but banished as compulsory “student activity fees” were used to advocate for all manner of liberal pet projects from the National Organization of Women to the Campus Abortion Rights Action League to the International Socialist Society. Simultaneously, conservative student groups were largely stonewalled from receiving these funds. The November 1998 Phyllis Schlafly Report praised the 7th Circuit U.S. Court of Appeals for ruling that the funding of political speech by activity fees from public universities is unconstitutional. However, a later ruling by the Supreme Court overturned this ruling, once again institutionalizing a Leftist agenda fueled by the unwilling contributions of conservative students.

That is not the only example of conservative students resorting to lawsuits in a vain attempt to secure their rights. A group of Jewish students tried to sue Yale for forcing them to stay in coed dormitories. These coed dormitories facilitated rampant sexual activity that most would find immoral, but the university insisted that dormitory life was “a central part of Yale’s education.” Allowing a student culture with a total disregard for any semblance of morality within the dormitories would have been a bad enough position in and of itself. However, by denying any accommodation to those who objected on religious grounds, Yale crossed the line into forcing individuals to leave their religious convictions at the campus gate. The case was thrown out of court because Yale is a private institution and could, in the opinion of the judge, discriminate as much as it pleased.

All of these cases come back to a central point: colleges and universities have an agenda far outside the scope of “higher learning.” Many colleges at the time of the writing of the November 1998 Phyllis Schlafly Report actively sought to contribute to the moral corruption and secular indoctrination of its students. This is a problem that has only intensified since 1998. Yet, these schools will simultaneously hide themselves behind a cloak of academia as though it removed all of their bias. Parents should not fall for this cloak-and-dagger game. On campus, the bias towards the Left is blatant and belligerent. You need to be very careful about the environment you send your young person into. We can change our nation’s university culture, but it will take parents who refuse to pay tens of thousands of dollars for their sons’ and daughters’ indoctrination. It will also take courageous young people who are willing to go against a truly intolerant culture and stand up for decency and conservative values on their campus in spite of strong institutional pressure.

To view the November 1998 Phyllis Schlafly Report in its entirety, please click on the image below. 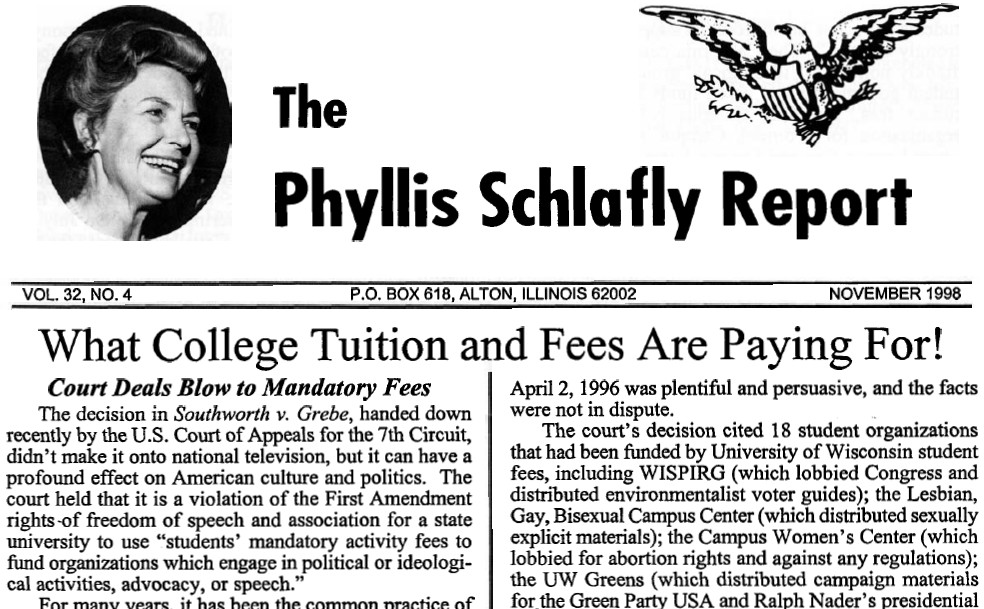 Phyllis Schlafly Eagles · April 29 | When Will We Cancel Darwin? For those of you who haven’t heard, cancel culture is the latest trend among … END_OF_DOCUMENT_TOKEN_TO_BE_REPLACED

As the midterm elections fast approach, Democrats have lost a key demographic that they relied on in 2020: college-educated men. The biggest … END_OF_DOCUMENT_TOKEN_TO_BE_REPLACED

What You Need to Know about where we are as a nation! Armstrong Williams joins the ProAmericaReport today to help give today’s WYNK. Armstrong is a … END_OF_DOCUMENT_TOKEN_TO_BE_REPLACED

For Immediate Release: May 10, 2022Contact: Ryan Hite, Communications Director Concerned Parents Are the Driving Force of Local and Midterm … END_OF_DOCUMENT_TOKEN_TO_BE_REPLACED

Phyllis Schlafly Eagles · May 5 | How Effective Is Social Justice Military Recruitment? As Covid subsides, the tyranny that exploited it continues. … END_OF_DOCUMENT_TOKEN_TO_BE_REPLACED

Phyllis Schlafly Eagles · May 4 | Who Sold a Million Books a Year? ** Previously recorded by Phyllis Schlafly // May 2015 ** Any modern author … END_OF_DOCUMENT_TOKEN_TO_BE_REPLACED