In January 2009, the United States saw the inauguration of President Barack Obama. As the rest of the conservative movement was wrestling with how to face this new challenge, Phyllis Schlafly was writing about a term that would come to define America under the Obama administration. Dripping with Alinskian aggressive socialism, this new term was “social justice.” Despite the positive connotation that lies on the surface of words like “justice,” it does not take much digging to realize that social justice is anything but just. Phyllis Schlafly correctly identified social justice as a banner under which we see propagators of liberal identity politics march. In spite of recent conservative electoral victories, the “social justice warriors” still march forward in liberal bastions around the country. Let’s take a look at the January 2009 Phyllis Schlafly Report and learn more about our biggest enemy in the culture war.

Social justice is inseparable from the concept of identity politics. Identity politics is targeting specific groups for support by saying that another group is causing them harm or disadvantaging them. Social justice provides the moral imperative to end those disparities between peoples at any cost. Of course, social justice does not carry any sort of objective moral authority. As Phyllis wrote in the January 2009 Phyllis Schlafly Report, “the term ‘social justice’ does not define a moral cause; it is leftwing jargon to overturn those who have economic and political power.”

For example, liberals claim that there is an institutional bias against women in the workforce and in politics (and just about everywhere else.) They claim that there is a class, which they call the “patriarchy,” who want to take choices away from women and maintain a system of oppression. Identity politics is when Democrats exploit this alleged injustice by saying that Republicans are a part of the patriarchy and that only Democrats can dismantle their power. Social justice is saying that it is a moral imperative to dismantle the patriarchy, even if it means that women must be given unfair advantages through quotas and lower standards. If there is no moral imperative, there is no political clout to exploit. If there is no political clout to exploit, the artificially constructed moral imperative would disappear. In this way, social justice is invariably tied to the concept of identity politics.

Aside from its close ties to identity politics, the primary defining feature of social justice is its close ties to the anti-American sentiment that pollutes many college campuses. That is why the January 2009 Phyllis Schlafly Report is titled “’Social Justice’: Code Word for Anti-Americanism.” This unpatriotic sentiment is illustrated perfectly by one of social justice’s foremost proponents. Bill Ayers started his life as a social justice warrior by founding a group of domestic terrorists called Weather Underground. He and his organization had the expressed mission of overthrowing the United States government by bombing public buildings like the U.S. Capitol Building and the Pentagon. Indeed, they have been responsible for a multitude of bombings and attempted bombings at high-profile targets around the nation.

While one might assume that a terrorist like Bill Ayers would be locked in the darkest prison cell in America, he actually enjoyed his freedom by becoming a professor at the University of Illinois in Chicago. Though he has since retired, he was still a professor when the January 2009 Phyllis Schlafly Report was published. Ayers’ radical anti-Americanism fit in perfectly with his teachings of social justice on an American university campus. Social justice teaches that America is corrupt and skewed in favor of the elect to the detriment of the poor and disadvantaged. That is why Ayers wanted to use violence to overthrow the American system of government. Based on the teachings of social justice, his bombings were morally justified because they supposedly helped remove those who were in power, even if they were killed in the process. As Ayers put it, “This society is not a just and fair and decent place.”

Of course, Ayers’ statement could not be further from the truth. America is the most “socially just” nation that the world has ever known. Anyone, no matter their skin color, sex, ethnicity, or wealth, can prosper with hard work and wise choices. To say that the system is rigged to the point that the ‘little guy’ cannot get ahead is totally preposterous. From the time that Phyllis wrote about it in her January 2009 Phyllis Schlafly Report until now, social justice has served no purpose other than to give moral justification for anti-Americanism and the disruption, hatred, and violence that it represents. Let’s make sure the next generation knows that optimism and patriotism should be the attitudes of everyone fortunate enough to enjoy the fruits of American society.

To view the 2009 Phyllis Schlafly Report in its entirety, please click on the image below. 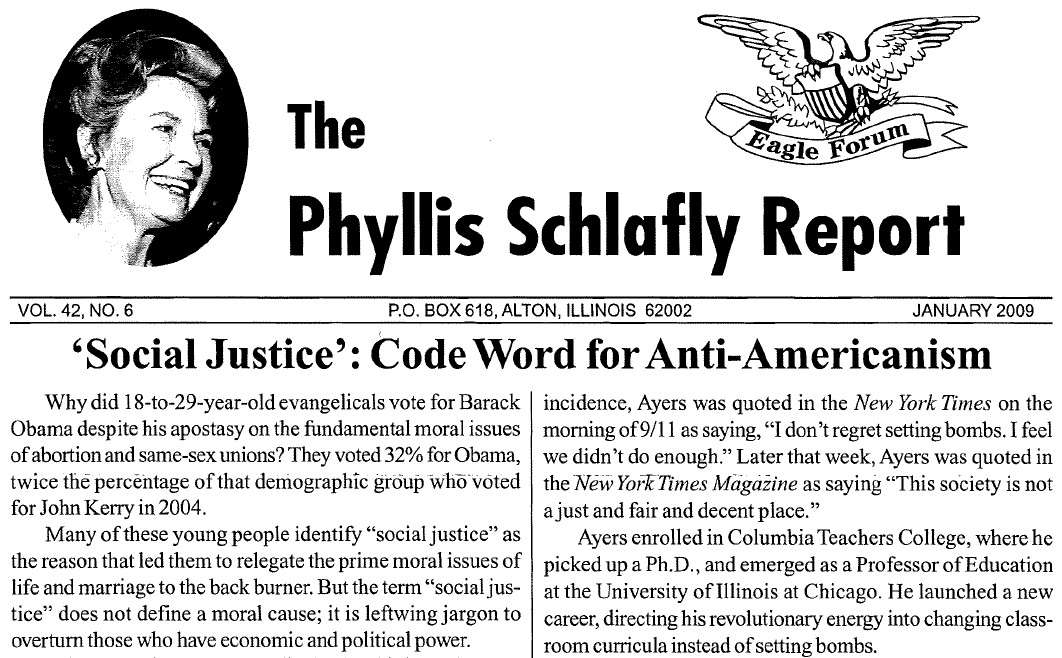 What You Need to Know is Rand Paul's wife is right! Senator Rand Paul was attacked a few years ago by his neighbor who was left-leaning. When Nancy … END_OF_DOCUMENT_TOKEN_TO_BE_REPLACED

Phyllis Schlafly Eagles · #WYNK: Biden is Lawless and Dividing | August 25, 2022 #ProAmericaReport The following is a transcript from the Pro … END_OF_DOCUMENT_TOKEN_TO_BE_REPLACED

What You Need to Know about the Projection Racket. What is the projection racket? It’s when the left and media work together to project onto their … END_OF_DOCUMENT_TOKEN_TO_BE_REPLACED

For Immediate Release: October 6, 2022Contact: Ryan Hite, Communications Director After Reporting a Mom to Her Law Enforcement Employer and the … END_OF_DOCUMENT_TOKEN_TO_BE_REPLACED

Phyllis Schlafly Eagles · December 2 | The Past, Present, and Future of the War on Christmas Haul out the holly and bring out the boxing gloves. … END_OF_DOCUMENT_TOKEN_TO_BE_REPLACED

Phyllis Schlafly Eagles · December 1 | We Need More Badges Herschel Walker had an iconic moment in a debate with Sen. Raphael Warnock when he … END_OF_DOCUMENT_TOKEN_TO_BE_REPLACED