Conservatives are given a lot of bad press for being “anti-choice” but they are actually much more in favor of real choice than their liberal counterparts. Of course, I am not talking about the “choice” to murder unborn children. Rather, I am talking about giving students and parents more choice in their education. Although the idea of school voucher programs has especially been trending in the last few years, Phyllis was talking about them all the way back in her October 1986 Phyllis Schlafly Report. As we celebrate the fiftieth anniversary of the PSR, let’s look at what our eloquent founder had to say about this important issue.

The concept of capitalism is predicated on the premise that business need not be adversarial to the interests of the people. Another major premise of capitalism is that choice is generally good for people. When capitalism is applied to business, we unleash an economic force which drives innovation, prosperity, and excellence which uplifts everyone. Furthermore, capitalism gives more choice to Americans by encouraging competition through the incentive of personal and corporate gain. Phyllis Schlafly, quoting former Colorado Governor Richard D. Lamm, wrote in her PSR, “In virtually every area of our economic and private lives we have a smorgasbord of choice. We can choose among 100 breakfast cereals, 200 makes of automobiles.” Having established the plethora of choice in America, he concluded that “It is ironic that in this land of choice there is so little choice in the public school system.” Phyllis Schlafly agreed with him.

Most people will agree that public schools are even more broken today than they were in 1986. The area where people disagree is how to fix them or if we should fix them at all. Some would claim that the solution is to pour more money into education. However, if the capitalistic influence of positive incentive is not used, schools will have no reason to use that money in smart ways. In reality, what we see more often than not is that money is given to those schools which underperform in order to prop them up, encouraging flagrant waste of resources. Capitalism must be infused into education in order to create the same excellence capitalism promotes in business. Opponents claim that capitalism always equals greed, which means putting capitalism into education will make schools care about money rather than students. However, quite the opposite is true. School choice forces schools to educate students to the satisfaction of parents or else lose the student and funding to another school. Any school which tries to cut corners in order to make quick cash would quickly lose the favor of parents and eventually be forced to either improve or close down.

School choice is still a hot topic in the political world today. Teachers’ unions like the NEA have held fast against the idea, which should come as no surprise to anyone. In the October 1968 Phyllis Schlafly Report, Phyllis had this to say on the debate performance of former NEA president Mary Futrell with regards to school choice: “She was visibly frightened at the prospect of competition. Her only argument was that [school choice] might discriminate against minorities. That’s ridiculous; certainly minority parents would be given the same freedom to choose as majority parents.” Indeed, one has only to listen to what opponents of school choice say to come to the contrary conclusion. The group called Americans United for Separation of Church and State warned about the kinds of schools that might prosper in a voucher system. “Many of these schools offer education far outside the mainstream. They teach creationism in lieu of evolution, offer a discredited ‘Christian nation’ approach to American history and put forth controversial ideas about other religions, the role of women in society, gay rights and other issues.” This argument against school choice is actually one of the best arguments for school choice that I am aware of.

Phyllis Schlafly fought on multiple fronts for traditional education, but most of those fights can be boiled down to one word: choice. She knew giving parents more choice is always the best choice for students. As she said, “The parental involvement which most parents would like most of all is being able to choose which school their children attend.” By giving school choice to parents, we can incentivize schools to excel, increase tax dollar efficiency, elevate the poor who live in struggling school districts, and broaden horizons for the next generation of Americans.

To view the October 1986 Phyllis Schlafly Report in its entirety, please click on the image below. 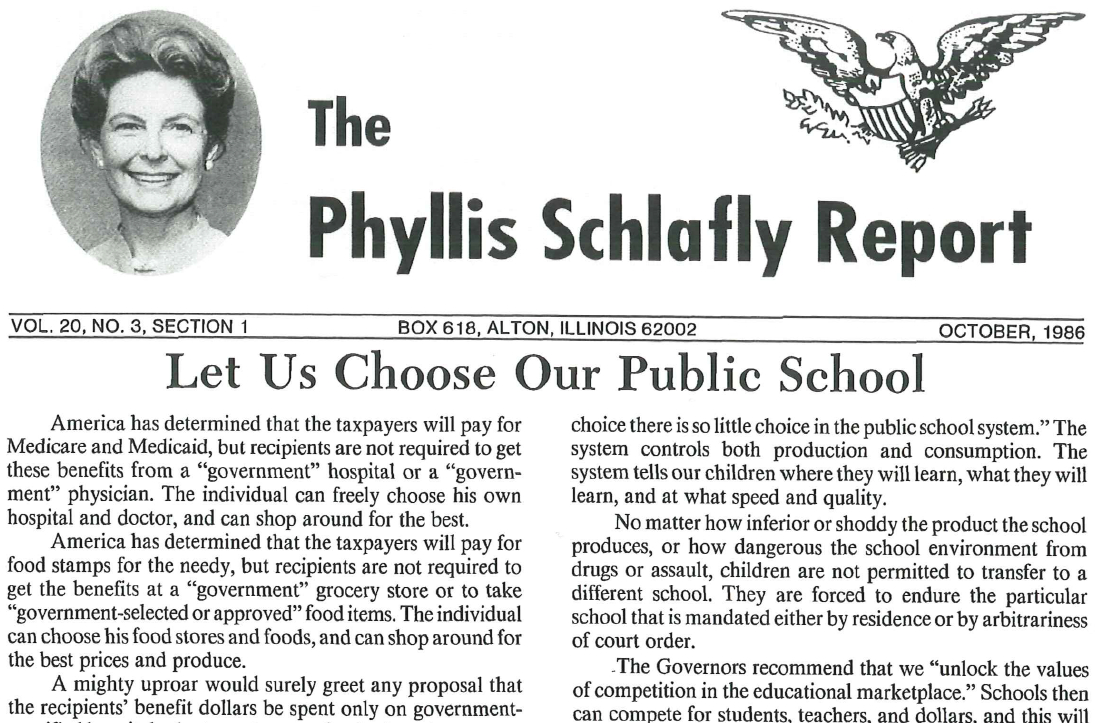 What You Need to Know is Montpelier is going Woke. Soledad O’Brien is now on the board of directors of Montpelier, James Madison’s home. She is part … END_OF_DOCUMENT_TOKEN_TO_BE_REPLACED

Phyllis Schlafly Eagles · #WYNK: Montpelier is going Woke | May 19, 2022 #ProAmericaReport The following is a transcript from the Pro America … END_OF_DOCUMENT_TOKEN_TO_BE_REPLACED

What You Need to Know is our election system is broken! It's failing and We the People have no confidence in the system. Pennsylvania has shown again … END_OF_DOCUMENT_TOKEN_TO_BE_REPLACED

Phyllis Schlafly Eagles · May 19 | Boys and Girls and Grades? ** Previously recorded by Phyllis Schlafly // May 2015 ** Colleges claim they … END_OF_DOCUMENT_TOKEN_TO_BE_REPLACED

For Immediate Release: May 10, 2022Contact: Ryan Hite, Communications Director Concerned Parents Are the Driving Force of Local and Midterm … END_OF_DOCUMENT_TOKEN_TO_BE_REPLACED