The mainstream media and mainstream culture have a way of making candidates think they know what the people want. However, knowing what people actually want is an art form that very few people have actually mastered. The most obvious contemporary example would be President Trump, who outsmarted all of the media, political pundits, and naysayers who claimed to “know” that he could not succeed unless he used more politically correct language. Phyllis Schlafly was another one of those exceptional people who could feel the unseen pulse of the American people. No matter how loudly the feminists claimed to represent all women, Phyllis would not be swayed from what she knew the American voting woman really wanted. Perhaps even more exceptional is the fact that Phyllis openly shared her insight in her October 1986 Phyllis Schlafly Report entitled “An Intelligent Candidate’s Guide to the Women’s Vote.” In it, she laid out a simple set of guidelines to help candidates overstep the feminist rhetoric and speak to women directly.

Obviously, politics and semantics go hand in hand. Thankfully, the Phyllis Schlafly Report and practicality also go hand in hand. Phyllis never intended for her PS Report to be read; she wanted it to be used. As she put it, “It is a tool for political action.” The October 1986 issue especially lived up to that goal. It included a step-by-step guide for avoiding the semantic pitfalls laid by feminists. The issue also included such other practical tips as not responding to attacks by feminists, not trying to play both sides by making separate pledges to feminists and homemakers, and not trying to patronize by forming a “women’s committee” to advise a campaign. All of these tips were designed to enable a patriot to manifest his passion by taking the big step into political involvement.

The primary misconception of the “women’s vote” was that a candidate could win women over as a voting block simply by pandering to feminist demands and the so-called “women’s issues.” Phyllis aptly pointed out that, by and large, women care more about the economy, taxes, and education than they do about easy divorce and taxpayer-subsidized abortion on demand. It would be narrow-minded and foolish to pretend that women are not as affected by the economy as men. On these grounds, Phyllis contended that a candidate should vie for the votes of women in the same manner as he might vie for the votes of men: with a broad base of strong policy stances.

The October 1986 issue is the perfect illustration of the practical nature of the Phyllis Schlafly Report. Anyone can write their opinions about political issues, but it takes real insight to train grassroots candidates with real practical advice. Phyllis’s ability to mobilize the grassroots to achieve tangible goals was one of her most famous (or infamous for some) qualities. If we want to emulate Phyllis, we must not work for the pro-family movement independently. Rather, we must empower other passionate patriots by giving them the practical knowledge to match their passion. Even as the Bible says “faith without works is dead,” so too is passion for America dead if not coupled with the works of activism. Let’s train others to come along beside us and add their strength to our great cause.

To view the October 1986 Phyllis Schlafly Report in its entirety, please click on the image below. 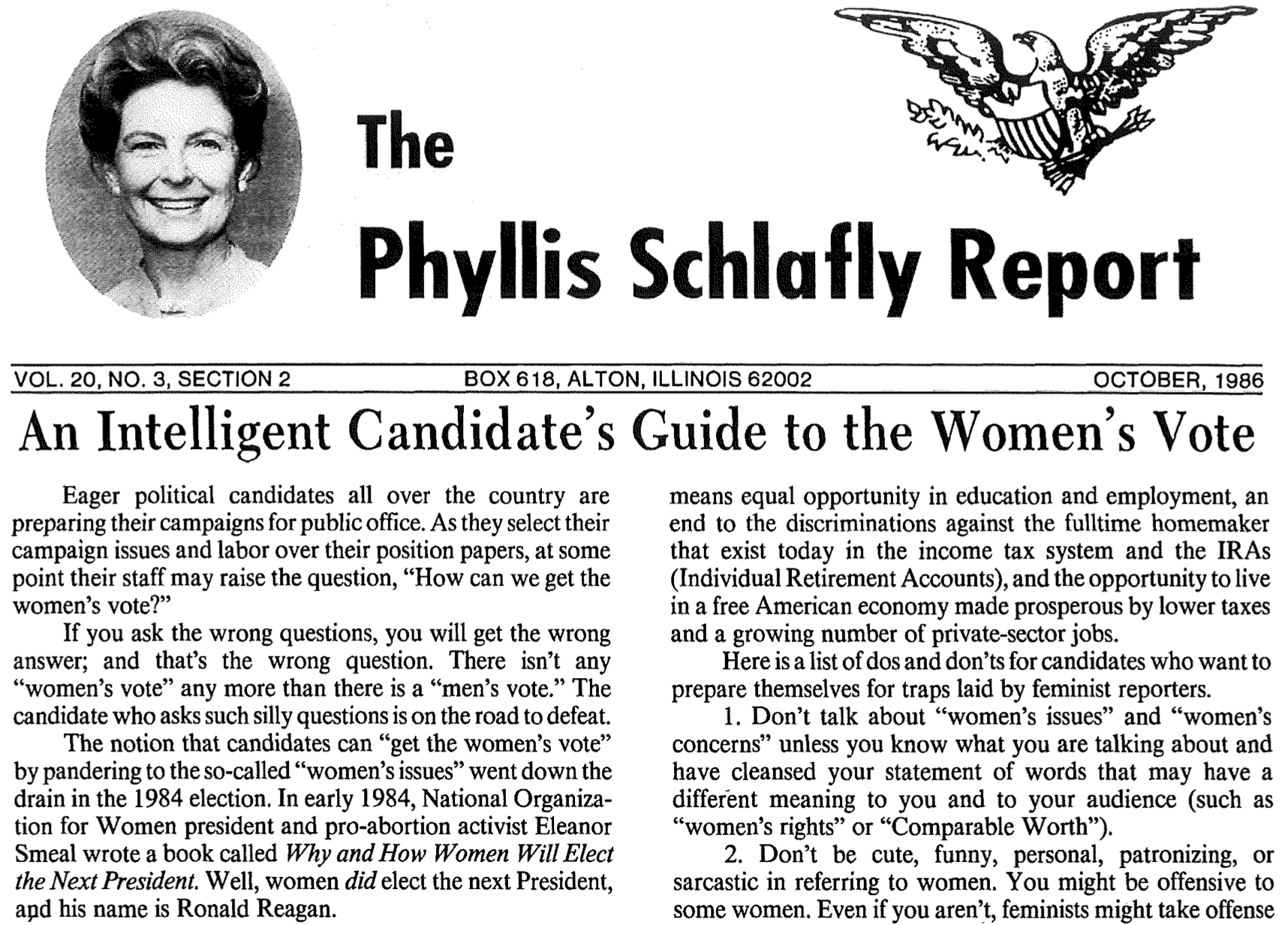 What You Need to Know is Montpelier is going Woke. Soledad O’Brien is now on the board of directors of Montpelier, James Madison’s home. She is part … END_OF_DOCUMENT_TOKEN_TO_BE_REPLACED

Phyllis Schlafly Eagles · #WYNK: Montpelier is going Woke | May 19, 2022 #ProAmericaReport The following is a transcript from the Pro America … END_OF_DOCUMENT_TOKEN_TO_BE_REPLACED

What You Need to Know is our election system is broken! It's failing and We the People have no confidence in the system. Pennsylvania has shown again … END_OF_DOCUMENT_TOKEN_TO_BE_REPLACED

Phyllis Schlafly Eagles · May 23 | Leftism Weakens America Thanks in large part to the culture of the mainstream media, many people have tunnel … END_OF_DOCUMENT_TOKEN_TO_BE_REPLACED

Phyllis Schlafly Eagles · May 19 | Boys and Girls and Grades? ** Previously recorded by Phyllis Schlafly // May 2015 ** Colleges claim they … END_OF_DOCUMENT_TOKEN_TO_BE_REPLACED

For Immediate Release: May 27, 2022Contact: Ryan Hite, Communications Director Pro-Life Americans Will Not Be Silenced By Pro-Abortion Scare … END_OF_DOCUMENT_TOKEN_TO_BE_REPLACED

Phyllis Schlafly Eagles · May 27 | A Horror Story in Washington, D.C. A horror story unraveled in our nation’s capital that would leave any … END_OF_DOCUMENT_TOKEN_TO_BE_REPLACED

What You Need to Know is Our Systems are Broken! With the recent gun-related tragedies, we see that restrictions aren’t enough. And gun control isn’t … END_OF_DOCUMENT_TOKEN_TO_BE_REPLACED