The December 1996 Phyllis Schlafly Report was titled “Feminist Assault on Reasonableness” because that is exactly what the feminists were up to in 1996. Phyllis pointed out that this wave of feminists in the public sphere came as a result of a new generation of women coming of age who had chosen career over family. This new generation dedicated themselves to implementing the “new and improved” feminist doctrines that were actually no better than what Phyllis had been fighting against in the early days of the Equal Rights Amendment. It was no surprise to Phyllis that these attacks would amount to an assault on reasonableness itself. Rather than making logical points about perceived discretions, feminists touted a fictional “vast conspiracy against women.” They contended that the only way to counteract this conspiracy was to essentially impose thought police on American men by punishing their perceived intent to slight a woman rather than their actions. Much like the “microaggressions” that are so popular on college campuses today, sexual discrimination as defined by the feminists could be committed without intent or knowledge by a man.

Curiously, this broad authority wielded by feminists to label sexual discrimination was rarely used in the defense of women with conservative views. Phyllis Schlafly was not slow to bring this to the attention of the American people in her December 1996 Phyllis Schlafly Report. She said “The feminist goal is not fair treatment for women, but the redistribution of power.” She later reiterated that the beneficiaries of the feminists’ actions were “nominally women, but actually only the feminists who know how to play by rules they have invented.” Feminists had no interest in caring for conservative women. In fact, they often responded to conservative women even more venomously than they did to men.

In the twenty-one years since Phyllis Schlafly wrote those words, nothing has changed. Feminists still degrade housewives while lauding women who wear burkas, the Islamic full body coverings that should be the very symbol of oppression against women. Feminists still oppose laws that made it illegal to use obscene or profane language in the presence of a woman, but they consider it patriarchal objectification if a man refers to a woman as “honey.”  Feminists still want to have gender quotas in the workplace and have women get promotions over men, but they do not care about the many women who would be hurt by a failing company where immutable traits are given value over character and credentials.

This dismissal of so many people leaves the Left vulnerable to defection. The “forgotten men and women” betrayed by the liberals who claimed to look out for their interests want to have a champion. Throughout her life, Phyllis Schlafly was that champion. Today, the forgotten still need an alternative to the Left’s rhetoric. With a message of liberty and opportunity, conservatives like Donald Trump can make sure that the forgotten voices are heard once more. When their voices combine with ours, we can handily drown out the feminists’ ongoing assault on reasonableness.

To view the December 1996 Phyllis Schlafly Report in its entirety, please click on the image below. 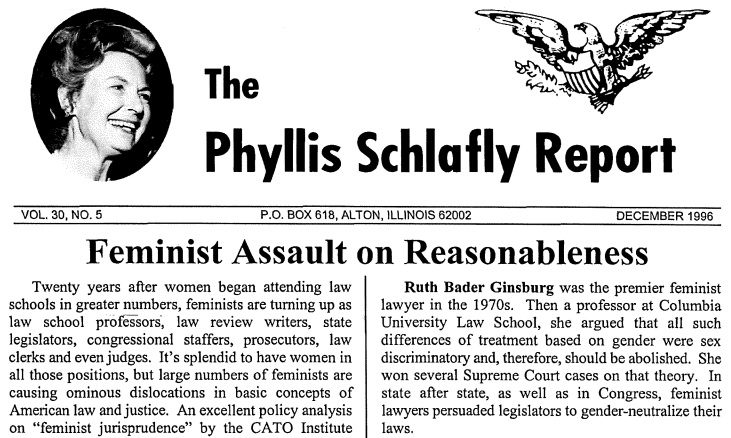 What You Need to Know is the media is finally reporting on the Southern Border! Governor Ron DeSantis and Governor Greg Abbott are forcing the media … END_OF_DOCUMENT_TOKEN_TO_BE_REPLACED

What You Need to Know is Ray Epps was in on it! Who is Ray Epps? Congressman Jamie Raskin gave us the answer after the prompting by Congressman Thomas … END_OF_DOCUMENT_TOKEN_TO_BE_REPLACED

Phyllis Schlafly Eagles · August 31 | Men and Abortion Among the many good things to come out of the Dobbs decision by the Supreme Court, the … END_OF_DOCUMENT_TOKEN_TO_BE_REPLACED

What You Need to Know is The Narrative Machine is Obsessed with Trump! First, it used to be called the Trump Exhaustion Syndrome now the left is … END_OF_DOCUMENT_TOKEN_TO_BE_REPLACED

Phyllis Schlafly Eagles · September 20 | LIV Golf Delivers a Hole in One LIV Golf has appeared as the foremost competitor to the PGA, which has led … END_OF_DOCUMENT_TOKEN_TO_BE_REPLACED

Phyllis Schlafly Eagles · September 28 | The Politicization of the School Lunchroom There are all kinds of labels on food these days. You may have … END_OF_DOCUMENT_TOKEN_TO_BE_REPLACED

Phyllis Schlafly Eagles · #WYNK: Ray Epps Was In On It! | September 27, 2022 #ProAmericaReport The following is a transcript from the Pro America … END_OF_DOCUMENT_TOKEN_TO_BE_REPLACED