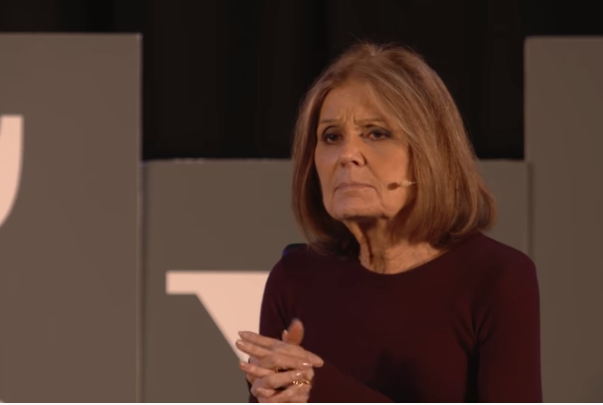 Gloria Steinem has been shilling out the propaganda of radical feminism for decades. Back in the 1970s, Phyllis Schlafly debunked so many of Gloria’s lies that Gloria Steinem started to refuse to debate Phyllis Schlafly. In a new interview with Variety magazine, Gloria Steinem revealed that she’s still stuck in the past. The only new part of her complaining is that now she’s adopted the hip new leftist tactic of comparing everyone she disagrees with to Adolf Hitler. In case you’re wondering who the Nazis are this time, it’s pro-lifers.

In the interview, Steinem said that “The first thing Hitler did was to padlock the family planning clinics and declare abortion a crime against the state.” While Gloria is right that Hitler outlawed abortion, she left out one critical detail. Hitler outlawed abortion so he’d have an army of Nazi troops to spread his racist hate throughout the world. That’s a whole lot different from the millions of conservative Americans who want to protect the unborn because we believe every life is a precious gift from God and worthy of protection. On the contrary, Planned Parenthood founder Margaret Sanger was a known racist and she was a eugenicist who wanted to use birth control to reduce the population of black people.

Another reason pro-lifers can’t be compared to Hitler is that pro-lifers believe in the sanctity of the family. We want to foster good environments where our children can grow and reach their full potential in the loving care of a mother and father. Hitler purposefully alienated children from their parents. His Hitler Youth programs were designed to train children to rat out their parents for criticizing the Reich. He taught a generation of young children that the state a better provider and source of instruction than parents. You could hardly say that these policies are characteristic of pro-life conservatives in America today.

Gloria Steinem can’t make coherent arguments today any better than she could when she debated Phyllis Schlafly years ago. Calling everyone she doesn’t like a Nazi won’t mask her poor logic. The next time a liberal ridiculously calls you a Nazi for being conservative, give them a smile. You’ve just won the debate.

What You Need to Know is the House GOP Must Exercise Power of the Purse. We’re back to following the money this week, this time in Congress! House … END_OF_DOCUMENT_TOKEN_TO_BE_REPLACED

What You Need to Know is Minnesota is now the most unrestricted state in America on abortion. Governor Walz signed into law an awful bill yesterday … END_OF_DOCUMENT_TOKEN_TO_BE_REPLACED

Phyllis Schlafly Eagles · February 3 | "Woman" Is the Word of the Year The internet is a powerful tool that most of us use every day. … END_OF_DOCUMENT_TOKEN_TO_BE_REPLACED

What You Need to Know is Tucker is allowing the will of the people to be heard! When a huge block of Republicans and so-called conservatives are … END_OF_DOCUMENT_TOKEN_TO_BE_REPLACED