The Washington Post ran last month what must rank as one of the looniest pieces they or anyone has ever run. Retired history professor Victoria Bissell Brown penned a column entitled “Thanks for not raping us, all you ‘good men.’ But it’s not enough.” I’m not sure which is worse: the headline title of the column, the column itself, or the fact that the Post would think this was appropriate to run. 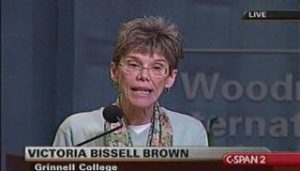 Feminism has never been about equality. Feminism is about rage and hatred toward men.

Brown essentially argues that men are, by nature, vile and terrible and will not and cannot change or truly help women. Even the “good” who oppose sexism and have advanced women in culture are incapable of being good or changing. Her article describes a recent night with her husband  in which she literally screamed at him because she was “triggered by a small, thoughtless, dismissive, annoyed, patronizing comment.”

This absolute lunacy perfectly displays the sad reality of radical liberal feminism. Phyllis Schlafly always pinpointed exactly what this op-ed shows. Feminists demand everything even though they admit their hatred and disbelief in men. There’s not one shred of reason in this op-ed or the feminist movement. Feminism has never been about equality. Feminism is about rage and hatred toward men. Even the liberal men who advance the feminist agenda.

Hatred of men isn’t a solution to any problem – it is the problem.

This is pure sexual identity politics, and it only will divide the American people, not bring them together.

What You Need to Know is Republicans cave on gun rights. Senate Republicans have put on full display the ruling class uniparty by compromising with … END_OF_DOCUMENT_TOKEN_TO_BE_REPLACED

Phyllis Schlafly Eagles · #WYNK: Montpelier is going Woke | May 19, 2022 #ProAmericaReport The following is a transcript from the Pro America … END_OF_DOCUMENT_TOKEN_TO_BE_REPLACED

What You Need to Know about the Jan. 6th Show Trials! On Thursday, the January 6th hearings will begin. NBC News correspondent Yamiche Alcindor … END_OF_DOCUMENT_TOKEN_TO_BE_REPLACED

Phyllis Schlafly Eagles · May 23 | Leftism Weakens America Thanks in large part to the culture of the mainstream media, many people have tunnel … END_OF_DOCUMENT_TOKEN_TO_BE_REPLACED

By Mason Mohon, Phyllis Schlafly Eagles Intern Abortion is the most controversial issue in the United States today, with both sides having great … END_OF_DOCUMENT_TOKEN_TO_BE_REPLACED