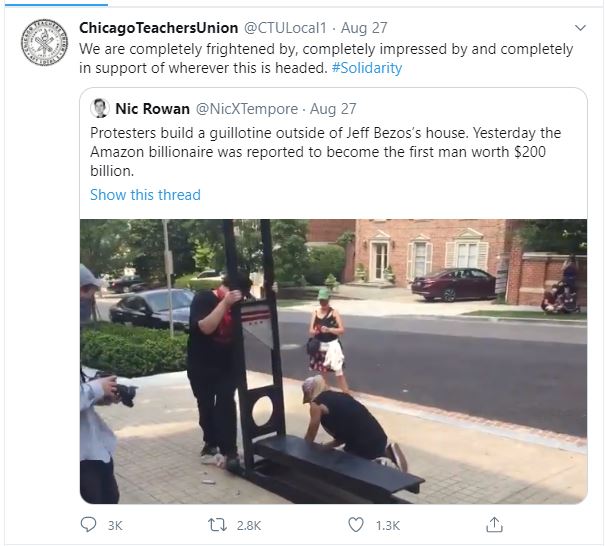 Parents and teachers alike are fed up with the nonsense going on in the teachers unions. On a fundamental level, the purpose of a union is to ensure that workers are not being abused by their employers. Generations ago, some unions did good work putting a stop to real safety concerns in crowded factories. Today, unions have mostly become little more than liberal special interest groups seeking nothing but the expansion of their own wealth and influence. Nowhere is this problem more prevalent than the teachers unions.

The Chicago Teachers Union shocked the nation with their disgusting display of far-left politics. Sporting a membership roster of 28,000 school employees, the CTU official Twitter account retweeted a video of protestors building a literal guillotine outside the house of Amazon CEO Jeff Bezos. In their retweet, CTU said “We are completely frightened by, completely impressed by, and completely in support of wherever this is headed. #Solidarity.”

Reading this tweet, I’ve got to wonder what that has to do with the education of Chicago’s children. Is our society so far gone that rioters want to return to the days of the French Revolution, when men, women, and children were put to death without any semblance of due process? For a teachers union to endorse such a despicable time period, they clearly need to go back and read more of their history books.

However, it is important to understand that it’s the teachers union pushing this radical action, not the teachers. In fact, many Chicago teachers harshly criticized the union for the tweet. One response said, “As a retired CTU member/teacher, I am appalled by the union’s apparent support for this. Knock it off and get back to what you should be doing – working for your members. This is absolutely disgusting.” Others piled on with comments like “No one asked this CTU member” and “I’m CTU and disagree with this.”

Proving once again that he is in touch with ordinary Americans, Donald Trump selected education for the first video message of his 2024 presidential … END_OF_DOCUMENT_TOKEN_TO_BE_REPLACED

Phyllis Schlafly Eagles · February 3 | "Woman" Is the Word of the Year The internet is a powerful tool that most of us use every day. … END_OF_DOCUMENT_TOKEN_TO_BE_REPLACED