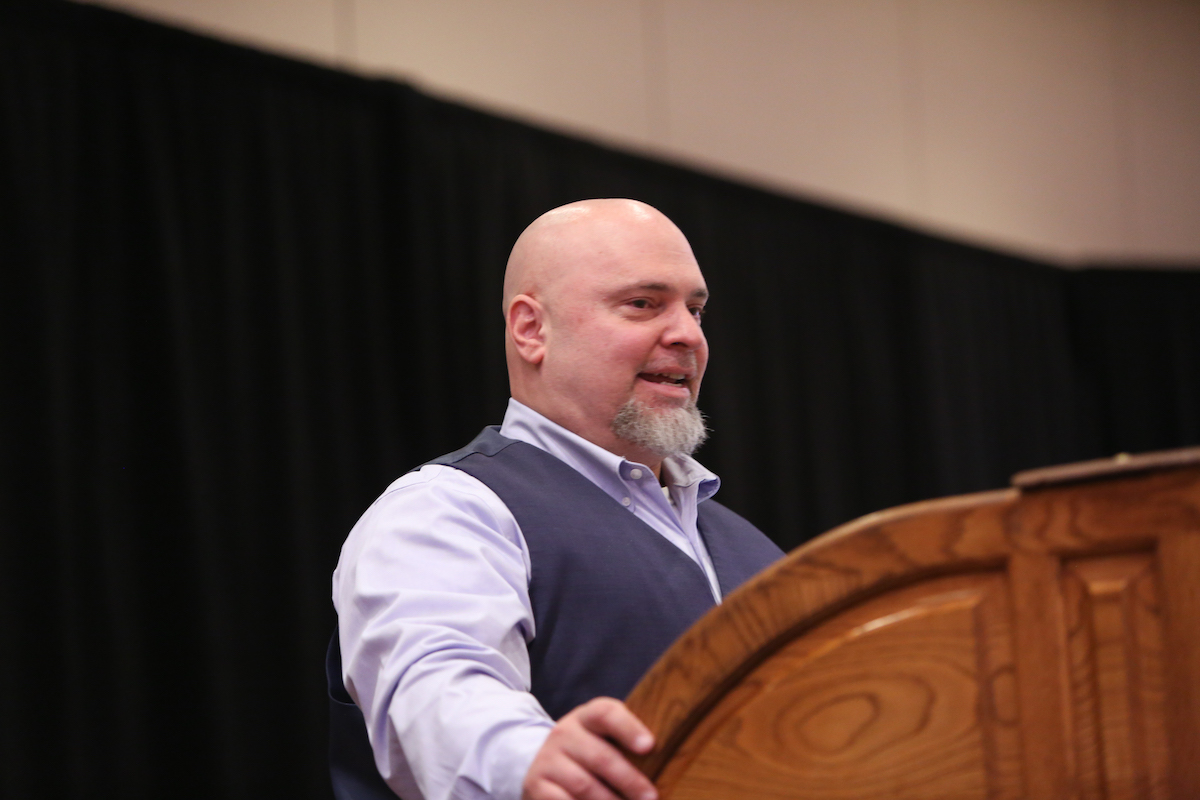 Dr. Duke Pesta’s experiences as an educational reformer, university professor, high school teacher, and the administrator of an online home school curriculum uniquely qualify him to address the current state of education in our country. Dr. Pesta is currently a professor of English at the University of Wisconsin, Oshkosh and Academic Director of Freedom Project Education.

Referring to himself at one point as an “educational evangelist,” Dr. Pesta advances his educational messages to the public with much passion and enthusiasm.  As said by Pesta, his was a tough talk to present during his allotted one-half time slot from 2:00 – 2:30 p.m. on Saturday, September 15, 2018, at Phyllis Schlafly’s Eagle Council XLVII held in St. Louis from September 14-15-16 at the Marriott St. Louis Airport, Saint Louis, Missouri.

Dr. Pesta described the state of education in terms of a “grave situation.”  The goal of learning informational facts through the educational process has been supplanted by the “social reorganization (indoctrination) of our kids.”  As to English classes, no longer is writing being taught, basic grammar or sentence structure (syntax).  Instead, Freshmen writing classes have been gutted, replaced by amorphous writing exercises designed to reinforce social justice pieties, instead of stressing good writing and sound composition.

As to the teachers and professors hired by colleges, liberals are hired and dominate college campuses.  Dr. Pesta related an incident at Brown University where Lisa Littman, an assistant professor, published a study titled “Rapid-onset gender dysphoria in adolescents and young adults: A study of parental reports.” Because the study concluded that Rapid-onset gender dysphoria among teens and young adults may be a social contagion linked with having friends who identify as LGBT, it was quickly yanked from Brown’s news releases after a transgender activist feeding frenzy.

Freedom of speech is being stifled on college campuses or any idea that does not jive with the dictates of progressive thinking.  We are judged as anti-science, if we assert that man-made global warming is a hoax.

As related by Dr. Pesta, accusations are now enough to shuts down arguments.  Such behavior surfaced in the current Kavanaugh hearing circus.  Democrats serving on the Senate Judicial Committee were never going to confirm Kavanaugh.  Allegations were enough by Christine Blasey Ford to cement their votes against Kavanaugh, even when there was no collaborating evidence.

Pesta likewise discussed the travesty of kids not being given foundational books to read in their entirety.  Children need only to understand the books.  This led to a discussion by Pesta of the lens system of education, which had its beginning 25 years ago.  Looking at books through “lenses” that advocate progressive thought and ideology is a way to misread texts, projecting left wing ideas onto them.  In simple terms, books are distorted through the lens systems approach, which has resulted in the infiltration of Cultural Marxism (social justice education) within Western educational institutions.   Pesta used the teaching of history as an example. Presumed to know about history, students are then asked to look at the text, only to be told the text doesn’t mean what it really says.  Pesta then went on to provide an example from a Shakespearean play in which Marxism was projected back to Shakespeare, forcing students to 400-year-old plays through the lens of Marxist economics. Pesta related this way of reading to imposing a mirror between students and texts, through which they only see their own culture and ideas as reflected back to them.

As to the attitude of students, ignorance is combined with arrogance. In years past students were humble in what they didn’t know. Today, the less students know the more they think they know.  In that students are being restricted in their learning experiences to those prescribed by a progressive educational program promoted by their liberal professors, brainwashing is occurring purposely to keep students ignorant. Listen here to this compelling interview, Why Cultural Marxism is Destroying America, by Duke Pesta and Stefan Molyenux.

Diversity has become an obsession on college campuses.  According to Dr. Pesta, those who speak the loudest about diversity are the ones trying to destroy it.  At the University of Madison beef gelatin in ice cream became an issue.   Students at the University of Wisconsin-Madison argued that the serving of ice cream, which often contains beef gelatin, in facilities like dining halls, makes Muslim and vegan students feel unwelcome on campus, even though ice cream is an iconic part of the culture in dairy-rich Wisconsin.  As Pesta remarked, ice cream with beef gelatin, or removing the Confederate flag, do not constitute real issues of concern; instead, they serve as ways for Marxists to win through leveling the foundation of our Western civilization in the minds of kids.

Why is education so wanting in this nation?  For Dr. Pesta, some blame can be placed on leftists who in the 60’s and 70’s became deans and professors at colleges.  As an expert on Common Core, having delivered more than 350 talks around the country alerting parents to its dangers,  Pesta stated how Common Core represents the federal takeover of education.  Even so, the federal government only contributes 6% or so to your state’s educational budget.  Most importantly, our Founding Fathers made no provision for public schools.  The Leftist, progressive slant of Common Core can be traced back to the time of John Dewy who idolized Russian education.  Nelson Rockefeller was the primary supporter of Dewey.

The results produced by Common Core leave much to be desired.  Dr. Pesta described Common Core as the pulling down of cultural Marxism into the public schools.” As reported by Dr. Pesta, at the 8th grade level only 35% of students are proficient in math, while 37% can’t read at the 8th grade level. In examining the name given to what has resulted in government control of education — Common Core — “Common” denotes the lowest common denominator, and “Core” raises the question of how all students benefit from the same core curriculum?

The real purpose of education is no longer just to gain knowledge.  It has been replaced by a social agenda that aims to produce adults who will all fit into the mold that has been prescribed for them through Common Core teaching.  In that teachers pass through a social justice pedagogy assures that this nation’s education system will remain wanting and below the standards set by many other nations.

Dr. Duke Pesta received his M.A. in Renaissance Literature from John Carroll University and his Ph.D. in Shakespeare and Renaissance literature from Purdue University.  He has taught at major research institutions and small liberal arts colleges on a wide variety of subjects at the graduate and undergraduate level, including courses on Shakespeare, Renaissance literature, the Bible, Russian literature, Christian Apologetics, and C.S. Lewis.  His book, The Renaissance and the Postmodern: A Study in Comparative Critical Values, was published by Routledge in 2016.

Dr. Pesta’s experiences as an educational reformer, university professor, high school teacher, and the administrator of an online home school curriculum uniquely qualify him to address the current state of education in our country.  Dr. Pesta is currently a professor of English at the University of Wisconsin, Oshkosh and Academic Director of FreedomProject Education.

As Academic Director of FreedomProject Education, a fully accredited, Common Core Free, online Classical school, built on Judeo-Christian values for students from Kindergarten through High School, Dr. Pesta has delivered more than 350 talks around the country alerting parents to the Dangers of Common Core.   In 2014 I was fortunate to hear one of Dr. Pesta’s talks warning about Common Core here in Illinois.  Here is the article Thorner wrote when I heard Dr. Pesta speak in 2014 at the Northern Illinois Patriots: Chilling Truth Behind Common Core State Standards.

What You Need to Know is Rand Paul's wife is right! Senator Rand Paul was attacked a few years ago by his neighbor who was left-leaning. When Nancy … END_OF_DOCUMENT_TOKEN_TO_BE_REPLACED

Phyllis Schlafly Eagles · #WYNK: Biden is Lawless and Dividing | August 25, 2022 #ProAmericaReport The following is a transcript from the Pro … END_OF_DOCUMENT_TOKEN_TO_BE_REPLACED

What You Need to Know about the Projection Racket. What is the projection racket? It’s when the left and media work together to project onto their … END_OF_DOCUMENT_TOKEN_TO_BE_REPLACED

For Immediate Release: October 6, 2022Contact: Ryan Hite, Communications Director After Reporting a Mom to Her Law Enforcement Employer and the … END_OF_DOCUMENT_TOKEN_TO_BE_REPLACED

Phyllis Schlafly Eagles · December 2 | The Past, Present, and Future of the War on Christmas Haul out the holly and bring out the boxing gloves. … END_OF_DOCUMENT_TOKEN_TO_BE_REPLACED

Phyllis Schlafly Eagles · December 1 | We Need More Badges Herschel Walker had an iconic moment in a debate with Sen. Raphael Warnock when he … END_OF_DOCUMENT_TOKEN_TO_BE_REPLACED