You do not have to read very far into the July 2013 Phyllis Schlafly Report to find out that Phyllis Schlafly had very strong feelings about Common Core. Using phrases like “violation of federal law,” “the mark of a totalitarian government,” “propaganda,” “pornographic,” and “encrusted with lies” all show that this was not a back burner issue to her. Phyllis went so far as to praise the state of Indiana for kicking out an incumbent pro-Common Core Republican governor in favor of an anti-Common Core Democrat. Given her passionate engagement on this issue, the message of her July 2013 Phyllis Schlafly Report needs to be heard as the battle rages for the hearts, minds, and futures of America’s young people.

Phyllis knew the key to diffusing Common Core is for the rapidly-expanding grassroots opposition to break away the crust of lies surrounding it. The first major lie of Common Core is that it just sets standards, not curriculum. Yet, it is hard to see how a teacher’s curriculum could not be affected by these standards. Teachers, who are put under incredible pressure by their administrators to make their students perform well on standardized tests, will naturally make their curriculum fit in with the test whether it is advantageous for the students or not. Why should national CC standards compel teachers to make students read such drivel as Upton Sinclair’s The Jungle when parents want their children to read real American classics like Mark Twain’s The Adventures of Huckleberry Finn? Yet if The Jungle were a required part of the standards, the teacher would have no real choice in their curriculum.

Another lie of Common Core is that its so-called “college-ready standards” are actually lowering standards previously held by many states. Phyllis exposed this lie beautifully in the July 2013 Phyllis Schlafly Report by citing the only mathematician on the Common Core Validation Committee. This bold professor refused to sign off on Common Core’s math standards because the CC standards are “in large measure a political document that . . . is written at a very low level and does not adequately reflect our current understanding.” Phyllis also gave strong documentation of high-level educators who are sounding the alarm on low standards in Common Core’s English and Science. Clearly, Common Core is not the path to bridging the widening gap between the American education system and the systems of other developed nations. No matter how many times CC advocates claim their beloved program is “internationally benchmarked,” any parent can easily tell that the Common Core math does not add up.

The biggest lie of Common Core is that forty-two states adopted it because they liked the standards. Federal coercion is the sole reason why so many states fell for the Common Core lie. As Phyllis put it, “CC is foisted on the locals by a combination of bribes, federal handouts, and as the price for getting a waiver to exempt a state from other obnoxious mandates.” Since the publication of the July 2013 Phyllis Schlafly Report, the Every Student Succeeds Act replaced No Child Left Behind. While ESSA purports to espouse strong language against federal pressure to adopt Common Core, the fact remains that this Obama-signed bill does nothing to eliminate Common Core. Vague prohibitions on federal interference in state and local control of education are likely to be ignored just as previous prohibitions on this kind of pressure were also ignored by the Department of Education.

The only real solution to the problem of Common Core is grassroots action on the state and local levels. Parents must make it known that they want to take back control of their children’s education once and for all. Like so many other attacks on the American family, the only solution to Common Core is the direct political involvement of the American family. Big government proponents of Common Core will doubtless continue to espouse their lies, but the informed citizen is always the cure for the cancer of falsehood.

To view the July 2013 Phyllis Schlafly Report in its entirety, please click on the image below. 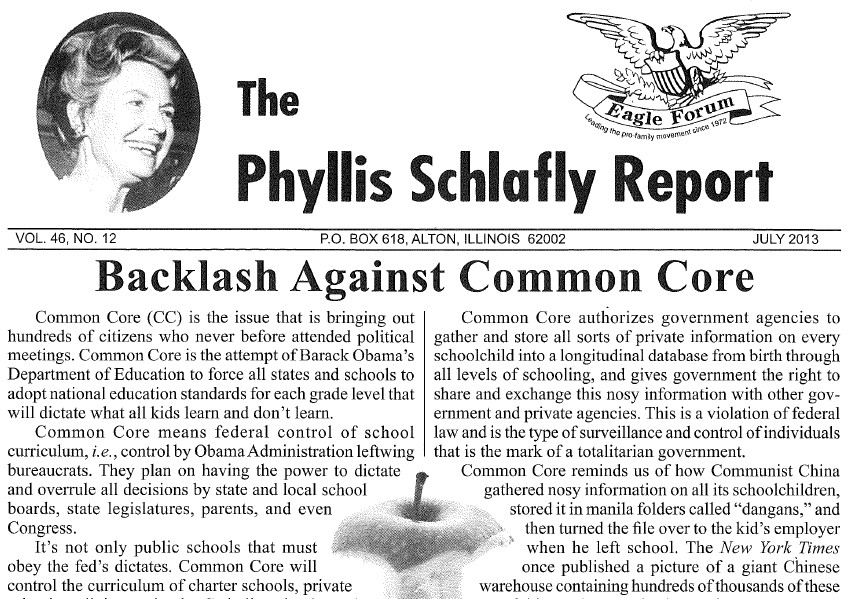 What You Need to Know is Biden is marching toward America Last. Even as our continue to get entangled in NATO and their picking a fight with Putin. … END_OF_DOCUMENT_TOKEN_TO_BE_REPLACED

What You Need to Know is about Carson v. Makin. This decision ruled that you cannot focus and discriminate against private schools — Supreme Court … END_OF_DOCUMENT_TOKEN_TO_BE_REPLACED

What You Need to Know is Pelosi, pills, and pain. Pelosi has failed us again: she is the only dictator in American political life. She dominates the … END_OF_DOCUMENT_TOKEN_TO_BE_REPLACED

What You Need to Know is we are in a unique moment and Donald Trump is stepping up to it. Even some of the rabid leftists have to admit that President … END_OF_DOCUMENT_TOKEN_TO_BE_REPLACED

What You Need to Know about Modern Politics. In the last couple of days, the January 6th committee has run out of steam. Here are two things to … END_OF_DOCUMENT_TOKEN_TO_BE_REPLACED

Phyllis Schlafly Eagles · June 29 | Pro-Life Without Exceptions: Health of the Mother Empty emotional appeals are the only way for pro-choicers to … END_OF_DOCUMENT_TOKEN_TO_BE_REPLACED

“I never like to take credit for anything,” Donald Trump told a hostile reporter last month. “God made the decision,” he added recently about the … END_OF_DOCUMENT_TOKEN_TO_BE_REPLACED