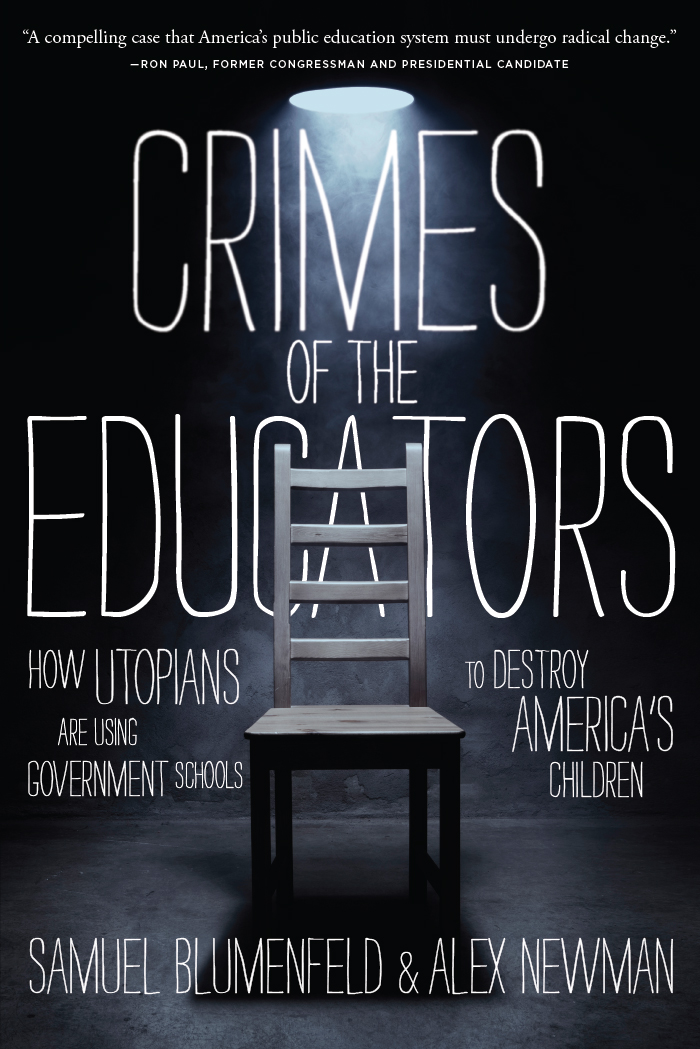 Parents are up in arms against the new attempt to federalize what schools teach called Common Core, but the even more basic “crimes of the educators” are described in the new book by Samuel Blumenfeld under that title. If you want your children to be smart and successful, rather than join the millions who graduate from high school unable to read their own diploma, or go into debt taking remedial courses in college, you need Blumenfeld’s book.

If your child is not a good reader, chances are he is not stupid or afflicted with some brain disability. It’s much more likely that your child was never properly taught how to read.

The failure to teach schoolchildren how to read in the first grade means that they fall farther behind with each passing year and soon become bored and resentful of school. By the time they get to the fourth grade, American students are scoring below children of many other nations.

Blumenfeld’s book details the process by which this happened, and it wasn’t any accident. It was planned that way by the socialists who believe that the way to undermine the U.S. capitalist system is to get rid of high literacy and independent intelligence so that the younger generation will accept Big Brother in the driver’s seat of our economy.

Blumenfeld traces the evolution of this system from an 1898 article called “The Primary-Education Fetich” by the father of so-called progressive education, John Dewey. In that article, Dewey wrote: “The plea for the predominance of learning to read in early school life . . . seems to me a perversion.”

Under Dewey’s progressive system, children are no longer taught phonics (how to sound out syllables so they can read big words), and instead are taught what is called the “sight” or “whole-word” method. That means they are taught to memorize a few dozen frequently used words, guess at other words from their shape, and predict the content of the article from pictures on the page.

If children don’t catch on to this system, parents are falsely told that their children were born with a disability called dyslexia. Students who become disorderly are given drugs such as Ritalin and Adderall.

Dewey wrote in 1896, “It is one of the great mistakes of education to make reading and writing constitute the bulk of the school work the first two years. The true way is to teach them incidentally as the outgrowth of the social activities at this time.”

According to Blumenfeld, “To Dewey, the greatest obstacle to socialism was the private mind that seeks knowledge in order to exercise its own private judgment and intellectual authority. High literacy gave the individual the means to seek knowledge independently.”

So Dewey developed and propagated the system that discouraged high literacy and inflicted children with a method that would prevent them from reading the great books and from developing high levels of independent intelligence.

Dewey introduced his theories at Johns Hopkins University. Dewey’s study of individualism led him to believe that we could develop the socialized individual by first getting rid of the traditional emphasis on language and literacy in the primary grades and turning children toward socialized activities.

John D. Rockefeller Jr. became Dewey’s sponsor with a $3 million grant. His sons, who were then subjected to the Dewey system, later admitted how handicapped they were as public officials. Both Nelson and his brother David admitted that they were poor readers which school officials blamed on dyslexia. Nelson admitted he could not read the public speeches written for him by high-priced speechwriters and had to toss the scripts aside and speak off the cuff.

Blumenfeld recognizes Common Core as “an educational fraud.” Instead of reading the literary classics, Common Core students are given portions from tiresome government documents and technical manuals instead of great literature.

The best way parents can deal with this problem is to teach your child how to read before you put him in school, as I did for my children and grandchildren. You can teach your child to read at home with a good phonics book such as my “First Reader”  and its “First Reader Workbook.” I suggest three 20-minute sessions every day for six months. You will be amazed at the result.

Blumenfeld’s use of the word “crimes” in the title of his book is not too strong a word to describe what the progressives have done to America and to our children. Don’t let them do it to your children or grandchildren. Immediately get “Crimes of the Educators” by Samuel Blumenfeld (a new WND book). The accurate subtitle is “How Utopians Are Using Government Schools to Destroy America’s

What You Need to Know is Pelosi, pills, and pain. Pelosi has failed us again: she is the only dictator in American political life. She dominates the … END_OF_DOCUMENT_TOKEN_TO_BE_REPLACED

What You Need to Know is we are in a unique moment and Donald Trump is stepping up to it. Even some of the rabid leftists have to admit that President … END_OF_DOCUMENT_TOKEN_TO_BE_REPLACED

What You Need to Know is a lesson on documents and double standards. Suddenly everyone has classified documents and everyone is spinning the stories … END_OF_DOCUMENT_TOKEN_TO_BE_REPLACED

Phyllis Schlafly Eagles · February 8 | Leftist Hollywood's Downward Spiral Looking back on 2022, it is plain to see that Democrat-dominated … END_OF_DOCUMENT_TOKEN_TO_BE_REPLACED