In the era of free speech zones and safe spaces, we are used to college professors displaying shocking bias and radical teaching. What could possibly be worse than the stories we have already heard, right?

Well American University in Washington, D.C. hosted an event that may just shatter your ever-lowering expectations for 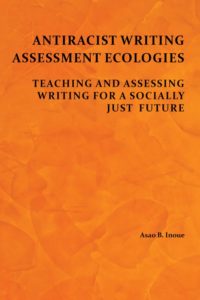 American college faculty. In February, the University hosted an event on “anti-racist” grading with a professor who contends that American grammar and grading standards are racist and perpetuate “unjust language structure.” University of Washington-Tacoma professor Asao Inoue lead a seminar designed to make professors rethink grading structures and “Rethink Writing Assessment Ecologies Towards Anti-racist Ends.” This isn’t the first time Inoue has made the news. A banner hanging in his writing department at UWT and a prior essay he published titled “A Grade-Less Writing Course that Focuses on Labor and Assessing” have given him a name in this new movement.

The bottom line for these professors is: stop grading on quality. Professor Inoue  contends that language is constantly changing and adapting, therefore there really is no “inherent ‘standard’ of English.” By adhering to old standards and “hierarchies” we are restricting how people communicate in our new modern global world. While it may seem logical for a professor to be open-minded about adapting to his students, the good feelings end there. This professor goes further into a description of essentially allowing students to grade themselves – not based on how their work held up to a standard, but based on how much labor they completed and what they “feel” their grade should be.

The reality of this dangerous no standard, no quality grading is that it leaves students wildly unprepared for a workforce in which they will be demanded to meet certain schedules and standards from employers who don’t care “how they feel they did.” Parents beware! From the implementation of “workforce ready” standards in primary education to “feeling” standards of secondary education, it’s never been clearer that liberals in the field of education have everything in mind BUT the loving and quality upbringing of our children.

What You Need to Know is about classified documents and presidential power! Joe Biden’s unmasking may be coming, thanks to the GOP House. The DOJ has … END_OF_DOCUMENT_TOKEN_TO_BE_REPLACED

What You Need to Know is we’re in a new pro-life America. Today’s March for Life is the first during which we can celebrate the overturn of Roe v. … END_OF_DOCUMENT_TOKEN_TO_BE_REPLACED

Phyllis Schlafly Eagles · #WYNK: Trump is Stronger Than Biden | January 27, 2023 #ProAmericaReport The following is a transcript from the Pro … END_OF_DOCUMENT_TOKEN_TO_BE_REPLACED