Throughout the years, the Phyllis Schlafly Report has been more than a source of conservative commentary and talking points. To a great extent, the purpose of the PSR has also been to be a source of facts that Americans could not find anywhere else. That model was established with Phyllis’s iconic book A Choice Not an Echo where Phyllis provided a firsthand account of the secret meetings in which Republican elites conspire to choose presidential candidates. Another excellent example of this firsthand knowledge can be found in the February 1985 Phyllis Schlafly Report, in which Phyllis exposed the anti-parent, anti-child, and anti-American agenda of the National Education Association. Education, specifically parents’ and students’ rights in education, became a major part of Phyllis’s legacy during those crucial years. In 1986, the year after the publication of this critical Phyllis Schlafly Report, Phyllis started the Education Reporter, a monthly publication that is still in print today. As an authority on education, Phyllis Schlafly is uniquely qualified to give us insight through her writings on this fundamental issue.

The stated vision of the National Education Association is “a great public school for every student.” In addition to the obvious lack of reference to any non-public schooling option, this vision is ominous because it does not accurately reflect the highly politicized NEA, which boasts 3.2 million members. Phyllis was not fooled by such flowery language and we should not be either. While the NEA claims non-partisanship, it has endorsed every Democrat presidential candidate since Jimmy Carter, and not a single Republican presidential candidate. The overwhelming majority of their campaign donation dollars have also gone to Democrats. However, Phyllis Schlafly uncovered even more egregious stances held by this lobbying machine masquerading as an education association.

The NEA Legislative Program from 1984-1985 listed off a litany of outrageous positions held by the organization. Phyllis highlighted some of the worst of the worst, including their stances favoring a nuclear freeze, favoring the ERA, favoring forcing women into the draft, and favoring unlimited access to contraceptives for people of all ages. One simply must ask why it is that an “education” organization would care about the draft and contraceptives. What possible link is there between a nuclear freeze and “a great public school for every student?” The answer is not one that the NEA wants to give. In truth, the National Education Association is little more than a cog in the machine of liberal advocacy. While they may specialize in taking away the rights of students and parents in the educational process, their first and primary allegiance is to the message of the left at large.

When the February 1985 Phyllis Schlafly Report was published, a major political controversy was brewing over the Hatch Amendment, a 1978 statute forbidding schools from doing a swath of controversial things in the classroom without parental consent, including exposing students to sensitive material, performing physical or psychological testing, or conducting surveys of personal information. Months before, Phyllis published her twelfth book, entitled Child Abuse in the Classroom. This book featured the testimony of parents and students before a panel with the goal of determining what to do with the Hatch Amendment. After hearing so many shocking testimonies, the Department of Education released new rules implementing the intent of the Hatch Amendment and making it easier for parents to assert their rights. In 1994, the scope of the Hatch Amendment was expanded again by the Grassley Amendment, further securing the rights of parents to control the education of their children. Obviously, the NEA opposed the Hatch Amendment every step of the way.

Parents need to remember these important educational rights secured by the Hatch and Grassley amendments. Do not be intimidated by teachers or school administrators who make wild claims about knowing what is best for your child. While many teachers and administrators only want the best for their students, they do not have ultimate responsibility. As the parent, you are uniquely qualified to safeguard the well-being and education of your child. You have a vested interest in their future that no teacher will ever have. The right to make decisions regarding your child’s education also comes with the responsibility to hold schools accountable. Bold patriots like Phyllis Schlafly have fought for years to hold open the school doors for parents; let’s carry on that tradition and make sure our children get the education they deserve.

To view or download the February 1985 Phyllis Schlafly Report in its entirety, please click on the image below. 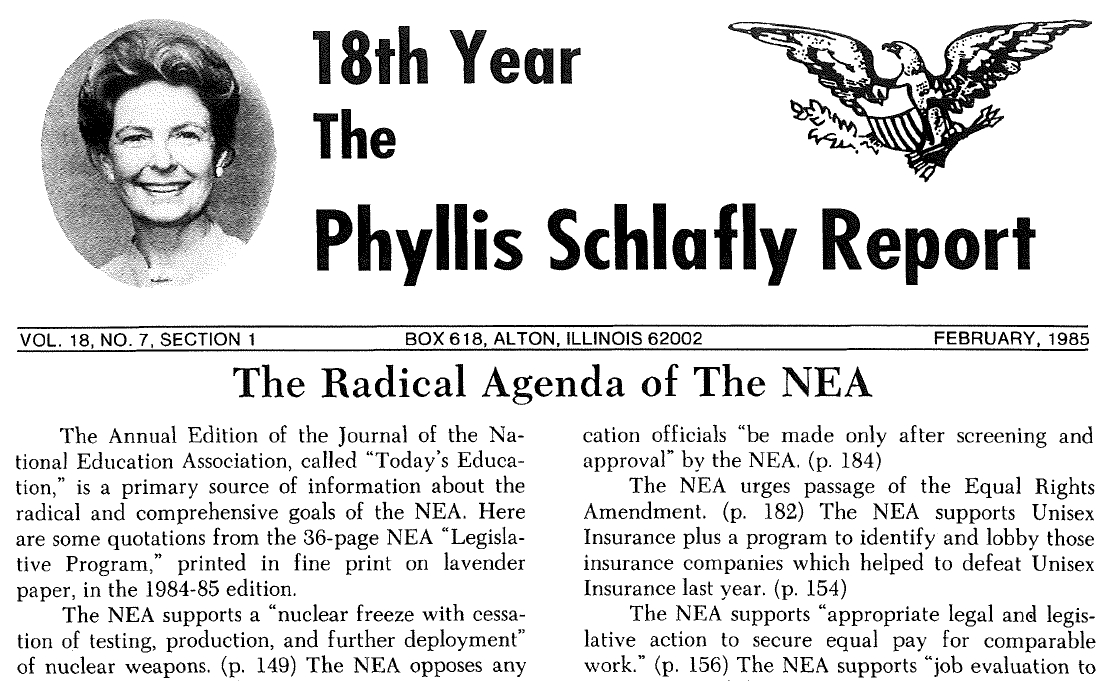 What You Need to Know is Republicans cave on gun rights. Senate Republicans have put on full display the ruling class uniparty by compromising with … END_OF_DOCUMENT_TOKEN_TO_BE_REPLACED

What You Need to Know is the Cartels Control the Border! The drug cartels control America's borders and our sovereignty. We are seeing more caravans … END_OF_DOCUMENT_TOKEN_TO_BE_REPLACED

What You Need to Know about the Power of Lawfare. The use of the legal system against We the People is getting more and more sophisticated. This was … END_OF_DOCUMENT_TOKEN_TO_BE_REPLACED

What You Need to Know is about Carson v. Makin. This decision ruled that you cannot focus and discriminate against private schools — Supreme Court … END_OF_DOCUMENT_TOKEN_TO_BE_REPLACED

What You Need to Know is the importance of Draining the Swamp! We watched as the Senate had hearings and then confirmed Justice Ketanji Brown Jackson … END_OF_DOCUMENT_TOKEN_TO_BE_REPLACED

By Mason Mohon, Phyllis Schlafly Eagles Intern Abortion is the most controversial issue in the United States today, with both sides having great … END_OF_DOCUMENT_TOKEN_TO_BE_REPLACED

For Immediate Release: June 24, 2022Contact: Ryan Hite, Communications Director Now Is The Time to Stand Up for Moms and Babies Without … END_OF_DOCUMENT_TOKEN_TO_BE_REPLACED