The Equal Rights Amendment died thirty-five years ago, on June 30, 1982.  Its opponents, lead by Phyllis Schlafly, gathered at a grand banquet to celebrate its demise. The Supreme Court ruled then that the time for its ratification had expired, and recent efforts to revive the amendment today have been dead on arrival. 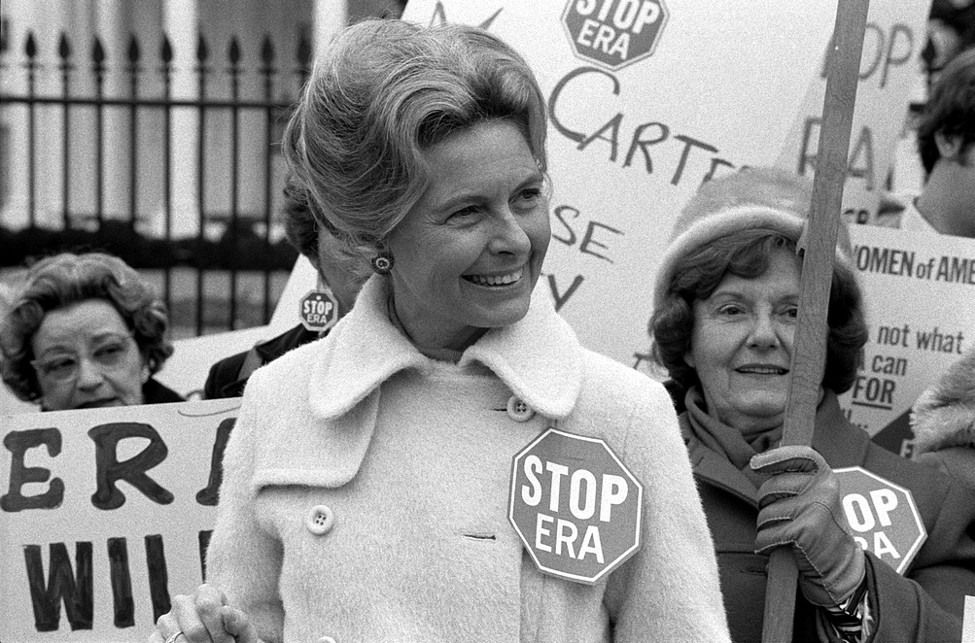 Liberals ridiculed many of Phyllis Schlafly’s arguments against the ERA in the 1970s, yet here we stand today, dealing with court-imposed same-sex marriage, transgender bathrooms, and taxpayer-funded abortion. Bill and Hillary Clinton put ERA’s most prominent advocate on the U.S. Supreme Court, but Justice Ruth Bader Ginsburg has never been able to persuade a majority of the Court that our Constitution requires mindless gender equality.

Our nation can be grateful to Phyllis Schlafly and her grassroots army for this victory.  America avoided the unisex society that ERA unsuccessfully attempted to impose. The obligation to register for the military draft still applies only to young men, and Defense Secretary James Mattis has sensibly delayed entry by so-called transgendered individuals into our military until the impact on combat readiness can be fully evaluated.

Thirty-five years without ERA, we have thriving single-sex sports teams, sororities, fraternities, and even some flourishing public schools and classrooms that are all-boys or all-girls. As bad as judicial activism is now, if the Equal Rights Amendment were in the Constitution, federal courts would be spending their time deciding if Johnny has a constitutional right to play on an all-girls’ field hockey team, or if an all-boys public school is unconstitutional.

This 35-year anniversary of the defeat of ERA commemorates an additional milestone: the emergence of the modern conservative movement, built on social values as much as economic and national security. The election of Donald Trump, which Phyllis Schlafly foresaw and supported from the beginning, was a triumph over feminist political correctness.

Stopping this media-promoted constitutional amendment once it was presented to states for ratification should have been as impossible as installing brakes on a runaway freight train. Our values and national security today owe much to Phyllis Schlafly’s stunning defeat of ERA 35 years ago.

What You Need to Know is Happy birthday to America! It might not seem like it, but things are really really good here in America. The left act like … END_OF_DOCUMENT_TOKEN_TO_BE_REPLACED

Phyllis Schlafly Eagles · #WYNK: Happy birthday to America! | July 1, 2022 #ProAmericaReport The following is a transcript from the Pro America … END_OF_DOCUMENT_TOKEN_TO_BE_REPLACED

What You Need to Know about the Jan. 6th Show Trials! On Thursday, the January 6th hearings will begin. NBC News correspondent Yamiche Alcindor … END_OF_DOCUMENT_TOKEN_TO_BE_REPLACED

Phyllis Schlafly Eagles · May 23 | Leftism Weakens America Thanks in large part to the culture of the mainstream media, many people have tunnel … END_OF_DOCUMENT_TOKEN_TO_BE_REPLACED

Phyllis Schlafly Eagles · July 6 | Will Globalists Build the Future? Amid chaos on many fronts, globalists march forward into the night. Klaus … END_OF_DOCUMENT_TOKEN_TO_BE_REPLACED

“This is about the future of the liberal world order and we have to stand firm,” declared Biden Administration official Brian Deese. “Liberal world … END_OF_DOCUMENT_TOKEN_TO_BE_REPLACED