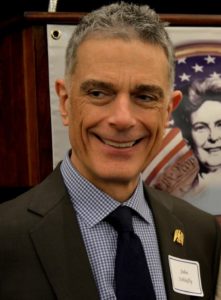 John Schlafly is the oldest son of Phyllis Schlafly. He has stood by her side and been an important part of her work for many years.

John graduated with honors from the University of Miami School of Law and earned a post-graduate degree in tax law from Washington University in St. Louis, where he had previously received a bachelor’s degree in electrical engineering.

Following ten years in the private practice of law in Illinois, he has worked with Eagle Forum as a lawyer, editor, and financial officer.  He currently serves as the editor of the Phyllis Schlafly Report.

JoAnn Jouett is a third-generation Eagle, working with the database in Alton, Illinois at the same job her mother, Mary Ann Schmitzer performed for 40 years. Her grandmother, Margaret Gaul, was Phyllis’s first assistant in her home office in Alton in the 1960s. JoAnn has known Phyllis almost her entire life, and spent the summers of her childhood playing with Phyllis’s children while their mothers worked. She was perhaps the youngest volunteer to have worked at the Alton office, spending many hours stuffing Phyllis’s first books (the original A Choice Not an Echo, The Gravediggers, and Strike from Space) into bags for mailing and sitting at long tables with other volunteers stuffing the Phyllis Schlafly Report for mailing as well. JoAnn is pictured with Phyllis at her birthday party in August 2016.

Georgia Wolters is a true “Renaissance woman” as she has many talents and abilities which she uses every day in our Alton Operations Center. She first worked in our Alton office from 1988 through 1992, then left temporarily to attend Dental Assisting School, get married and moved out of the area. Georgia then came back to the area and to the Alton office in 2002, where she now handles all of our mailing operations, from opening incoming mail to processing outgoing mailings, including the monthly Education Reporter. She has recently learned to use our AccuZip mail sorting program, is learning our publication software, and also processes all of our incoming credit card payments. If there is a challenge to confront, she persistently works until it is conquered; Georgia is a valuable asset in our operations center!